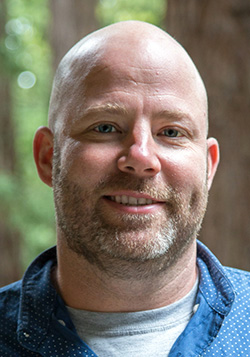 The human genome contains tens of thousands of protein-coding genes. When a gene is turned on, many RNA copies are made of the gene’s DNA sequence. The genetic code carried by these “messenger RNAs” is then translated into a protein that will perform some cellular function. Before that happens, however, the RNA copies are subject to an elaborate regulatory system in which the messages may be processed in different ways, leading to dramatic changes in gene expression. RNA-binding proteins orchestrate virtually all of these regulatory decisions.

“In my lab, we want to understand how RNA-binding proteins control the cellular fate of messenger RNAs,” Sanford said. “We are interested in how messages are assembled and how this information is used by the cell. I find it fascinating that alternatively processed messages from the same gene can have radically different functions in the cell.”

According to Sanford, this field is especially important because aberrant RNA processing is the root cause of some inherited human diseases, such as spinal muscular atrophy and myotonic dystrophy, and some cancers. “The advent of drugs targeting RNA makes this a truly exciting time to be studying the actions of RNA-binding proteins,” he said.

The MIRA grant provides an additional year of funding compared to regular NIH grants, and it supports the investigator’s overall research program rather than one specific project. The goal of MIRA is to increase the efficiency of NIGMS funding by providing investigators with greater stability and flexibility, thereby enhancing scientific productivity and the chances for important breakthroughs.

“It gives investigators the freedom to follow the best scientific path forward,” Sanford said. “There is no better place to be doing this kind of work than at UC Santa Cruz, which has been the epicenter of the RNA world for decades.”