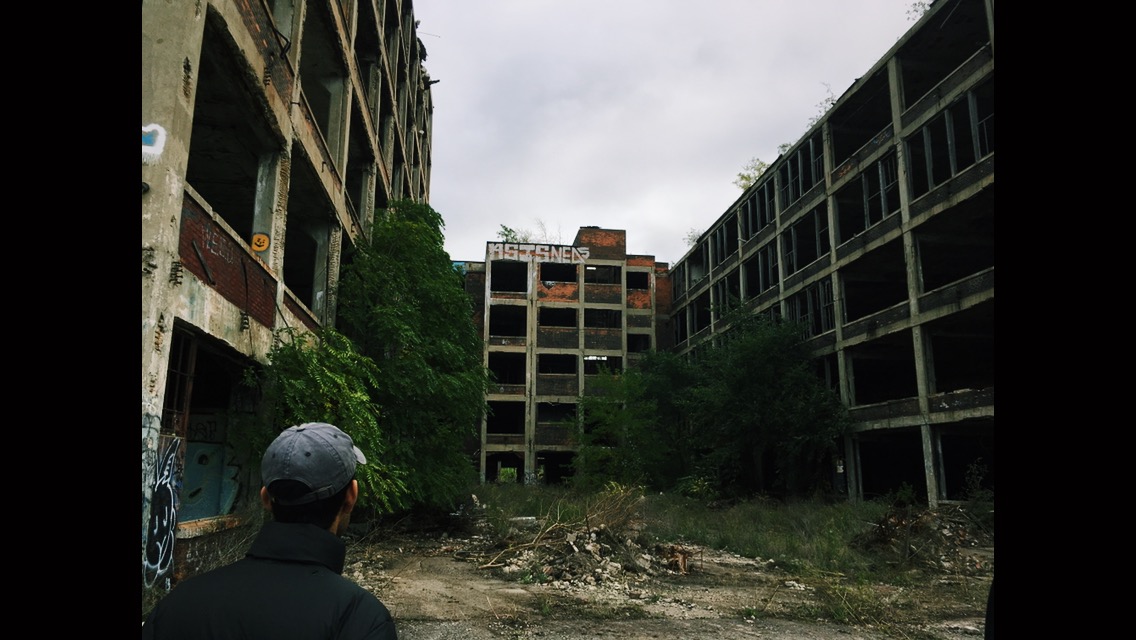 On a trip to Detroit, Michigan, students explored abandoned factories and warehouses to understand the different parts of Detroit. Image credit: Benjamin Garcia

ANN ARBOR—When thinking about modern architecture, cities like Detroit and Columbus, Indiana, may not come to mind as top places to be studied. But students in a unique introductory course at the University of Michigan say they have learned much about the principles, history and politics reflected in these and other area communities through their built environments.

“I am learning more by being able to encounter and experience the buildings, which cannot be done in a generic classroom setting,” said Lauren Conroy, a freshman architecture student who came from a high school that didn’t offer any architecture courses. Conroy was attracted to the class because it allowed her to see the buildings rather than study them in a book.

This is the first semester for On Site: Architecture in a Mobile Classroom, taught by Professors Anca Trandafirescu and Claire Zimmerman. In addition to Detroit and Columbus, students have toured the Cranbrook area in Oakland County and the U-M campus to learn about more than architectural techniques.

“We wanted to create a class that lets students interact with the buildings while also figuring out why they were built the way they were,” Zimmerman said.

Each class period revolves around a specific topic or type of building, such as sustainability, structure, libraries, churches and more.

While the choice of Columbus, Indiana, may seem surprising, given the city’s size—a total of about 28 square miles and a population of roughly 47,000 people—the community south of Indianapolis is known as a showcase of modern architecture with its densely packed works from award-winning architects.

“Everyday buildings, like a bank, library, church and elementary school are designed by famous architects in Columbus including I.M. Pei and Eero Saarinen, who was the architect that designed the St. Louis Arch,” Conroy said.

“When we went to Columbus, I posted a few pictures of some of the buildings on my social media and one of my high school friends, who is an architecture student at a different university, commented and said he had just learned about those buildings in class. He was very jealous to hear that I actually had the chance to see them in person.” 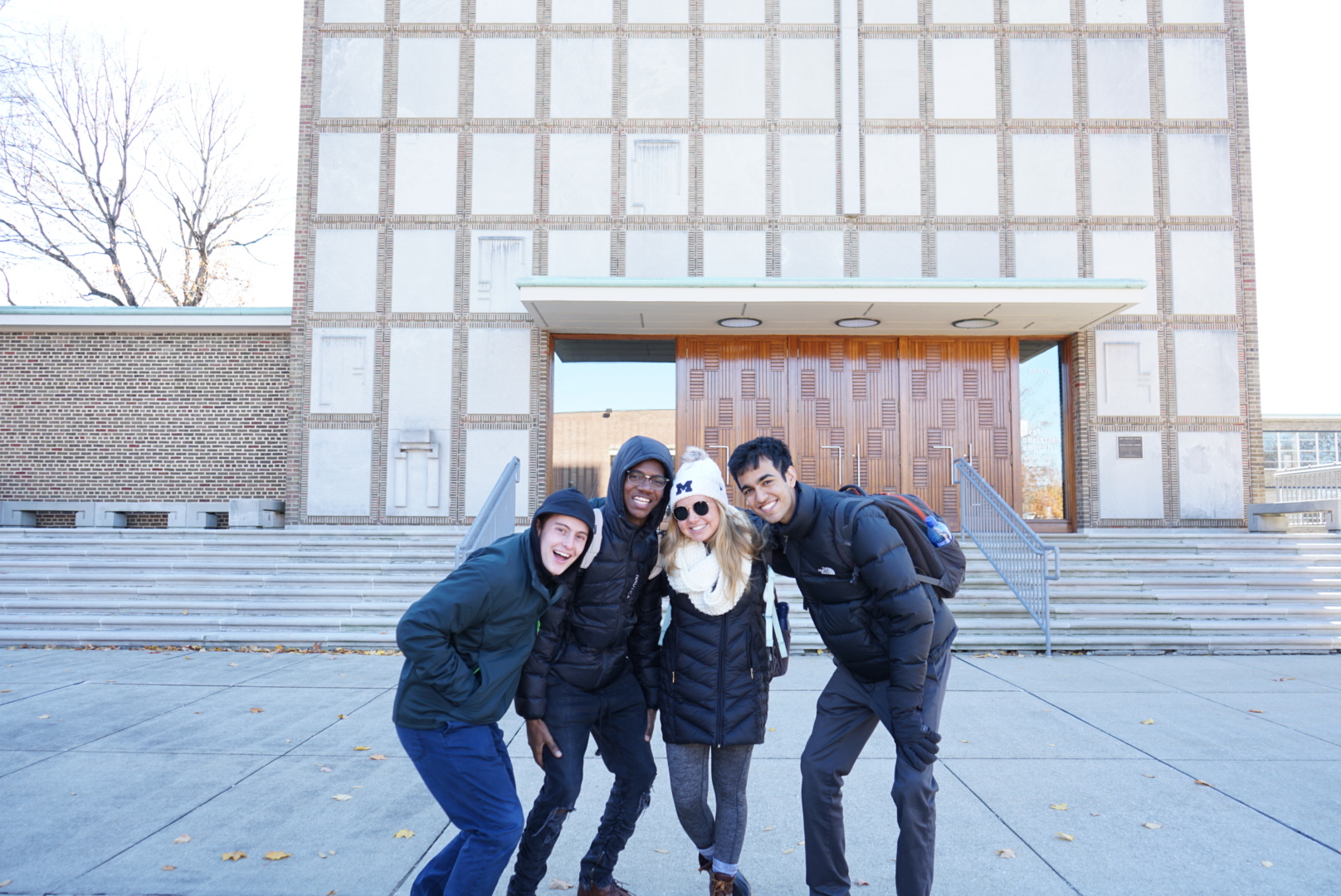 Students in the class have made several trips to Detroit, exploring the abandoned buildings and industrial parts that reflect its nickname “Motor City,” as well as the skyscrapers, newer office buildings, and churches.

“I’ve never been to Detroit before so I had no clue what Detroit really is,” Conroy said.

While much of the tour reflected some of the rundown images often associated with Detroit, going on a second trip to the business areas showed her a newer, revitalized city.

The class also delved into the suburbs, checking out Cranbrook’s schools, temples, and churches to understand the influence of Detroit’s architecture on surrounding areas.

“The interesting use of columns along with sculptures scattered around the courtyards complimented the buildings in a regal way,” said freshman architecture student Amy Wang. “And we learned that many of them were actually state-of-the-art pieces created by famous architects.”

Conroy said she struggled a lot this semester in determining what exactly makes architecture ‘modern.’

“It was at Cranbrook School that I was finally able to connect the dots,” she said. “To me, what is so intriguing about the design of the school is that the architect, Eliel Saarinen, used a combination of classical and modern architectural aspects. These two different styles complemented each other in a way that made them blend together but also stand out.”

A tour of the Ann Arbor buildings students pass by every day focused on sustainability.

“Why did the designers decide to make such a large atrium through the middle of the building when the space could’ve been used for something else?” one student asked while touring the newly opened Biological Sciences Building.

Guides explained how buildings can evoke feelings or encourage certain types of interactions. One of the key considerations in designing the Biological Sciences Building was creating a space for social interactions so that researchers don’t feel isolated.

“We intentionally designed it so people have to go across the building to get coffee, go to the restrooms, etc., in hopes that they’ll run into other friends they don’t normally see,” said Scott Wood, project manager for the Biological Sciences Building.

For South Hall, it was important to design a building that remained true to the U-M Law School’s beloved iconic architecture while reflecting the contemporary focus of the school’s research and curriculum.

“People feel deeply connected to the U-M law building,” said South Hall Chief Operating Officer Michele Wing on a tour of South Hall. “It reflects what they like about the university and the research they love doing.”

Wang finds the course to be a welcome change from her other architecture classes, which are more focused on drawing buildings.

“I love seeing the buildings,” Wang said. “It gives me more ideas about future drawings and renderings. I also like how we get to be critical and question why something was built the way it was.”

The course is made possible by a Third Century Initiative grant.