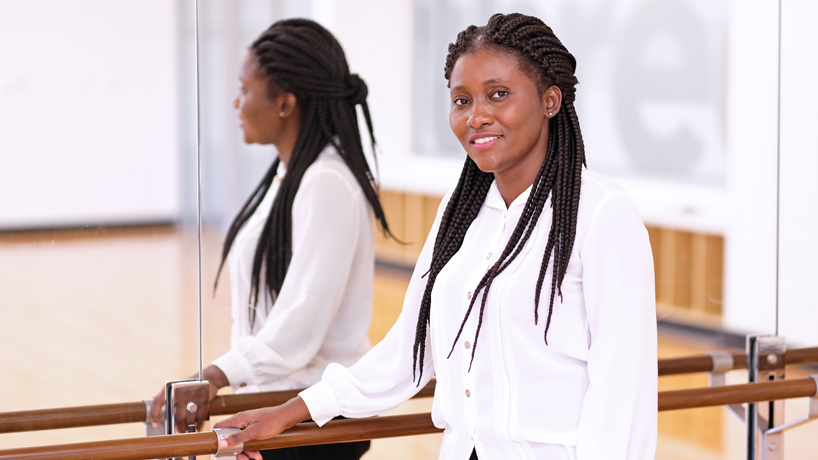 A few years ago, Adelaide Aboagye was in the middle of a master’s program studying ways to reduce instances of child marriage in Ghana.

Through her time as a research assistant, she proposed policy changes and hypothesized that poverty, tradition and lack of education – particularly among girls – were predictors of early marriage.

After growing up in Ghana, she’s tied to the topic. Education was her way out.

Aboagye began her educational pursuit as an undergraduate social work student in her home country and later transitioned to Washington University in St. Louis, where she earned an MSW. She assumed an affinity for helping others would guide her through a career in social work, but after a year in the field, she found herself called back to research.

She’s now at the University of Missouri–St. Louis, where she’s still helping others – she’s just doing it from behind a computer screen.

Aboagye arrived at UMSL in 2016 interested in expanding on her data science knowledge. But during her first semester in the Master of Science in Information Systems program, she began researching cybersecurity issues, which sparked a new area of interest.

“With my background in research, I decided to look at issues concerning theft and data loss,” Aboagye says. “These are real issues affecting a lot of companies and government agencies, so that led to my interest in cybersecurity.”

Today, her research focuses on cyber threats burdening the health-care system, particularly improper disposal of protected health information in hospitals. She does this independently while also balancing work as a graduate assistant for the Department of Information Systems. In the role, she assists faculty members with research, including examining cybersecurity issues in western Africa, and serves as a student tutor.

Aboagye’s assistantship motivated her to submit her own research for a graduate cybersecurity workshop in March at Kennesaw State University. She was the only female selected for the cohort of seven.

“I think all of these things make me more diverse, and I’m looking at different roles that I can play as a student and also a researcher,” Aboagye says. “My experiences since coming to UMSL have opened a lot of doors for me and have encouraged me to go on for a PhD to pursue teaching and research.”

This story was originally published in the fall 2018 issue of UMSL Magazine. If you have a story idea for UMSL Magazine, email [email protected].