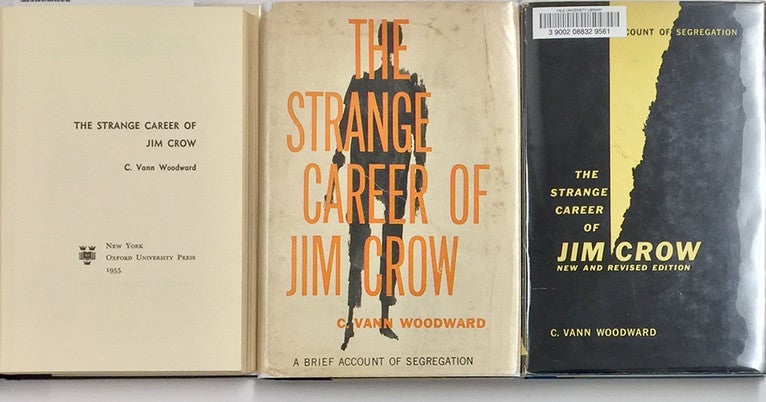 Around the Yale campus, C. Vann Woodward’s name is often associated with the Report of the Committee on Freedom of Expression at Yale, which he chaired in 1974. A new exhibition at the Beinecke Rare Book and Manuscript Library explores how an earlier work by the scholar influenced history and its relevance to the present day.

The Beinecke Library will display copies of the first and revised editions of Woodward’s book “The Strange Career of Jim Crow” Jan. 14-27, in conjunction with the Martin Luther King Day commemorations on campus.

“The Strange Career of Jim Crow” was first published in 1955, based on lectures Woodward, then on the faculty of John Hopkins University, had given at the University of Virginia in 1954. In it, Woodward analyzed the economic and political origins of the “Jim Crow” legal regime of white supremacy and racial segregation that arose after Reconstruction at the end of the 19th century.

“No book about segregation and its origins and development had as much impact on American society and education as Woodward’s ‘Strange Career,’” said David W. Blight, the Class of 1954 Professor of American History at Yale and director of the Gilder Lehrman Center for the Study of Slavery, Abolition, and Resistance.

Speaking to a crowd of more than 25,000 people from the steps of the capital in Montgomery, Alabam after a five-day voting rights march in 1965, Martin Luther King Jr. said: “C. Vann Woodward, in his book, ‘The Strange Career of Jim Crow,’ clearly points out, the segregation of the races was really a political stratagem employed by the emerging Bourbon interests in the South to keep the southern masses divided and southern labor the cheapest in the land.”

King made his remarks about Woodward in his address to a crowd of more than 25,000 people on March 25, 1965, as he spoke from the steps of the capitol in Montgomery, Alabama, at the conclusion of the five-day voting rights march that had begun in Selma. King drew on Woodward’s analysis at length in his speech, continuing:

Toward the end of the Reconstruction era, something very significant happened. That is what was known as the Populist Movement. The leaders of this movement began awakening the poor white masses and the former Negro slaves to the fact that they were being fleeced by the emerging Bourbon interests. Not only that, but they began uniting the Negro and white masses into a voting bloc that threatened to drive the Bourbon interests from the command posts of political power in the South. …

To meet this threat, the southern aristocracy began immediately to engineer this development of a segregated society. I want you to follow me through here because this is very important to see the roots of racism and the denial of the right to vote. Through their control of mass media, they revised the doctrine of white supremacy. They saturated the thinking of the poor white masses with it, thus clouding their minds to the real issue involved in the Populist Movement. They then directed the placement on the books of the South of laws that made it a crime for Negroes and whites to come together as equals at any level. And that did it. That crippled and eventually destroyed the Populist Movement of the nineteenth century. (“Address at the Conclusion of the Selma to Montgomery March.”)

Woodward — who joined the Yale faculty in 1961 and taught until his retirement in 1977 — was present that day in Montgomery in 1965, along with other historians organized by John Hope Franklin, in solidarity with King and the movement against white supremacy and racial segregation

As a scholar and a citizen, Woodward contributed to the discourse about the nation’s “second Reconstruction,” a phrase Blight remembers that he first encountered in reading Woodward. Blight notes, “Woodward actually called the early civil rights movement by these words, showing that what the country now faced in the 1950s and 1960s (when he published revised editions) a return the same vexing issues as the 1860s and 1870s.”

“Woodward’s classic book endures as a prime example of a historian engaged in the pursuits of social justice, and writing history that both changed the world and charted a way to a second Reconstruction,” Blight says.

In addition to copies of “The Strange Career of Jim Crow,” the Beinecke exhibit will also include items from the historic 1963 March on Washington for Jobs and Freedom led by King.

The Beinecke Library will also have a one-day special display in its reading room of other materials related to King and the African American Freedom Movement on the King holiday, Monday, Jan. 21, from noon to 4 p.m.

Beinecke Library events and exhibitions are free and open to the public. The library is located at 121 Wall St. Visit the Beinecke website for more information.