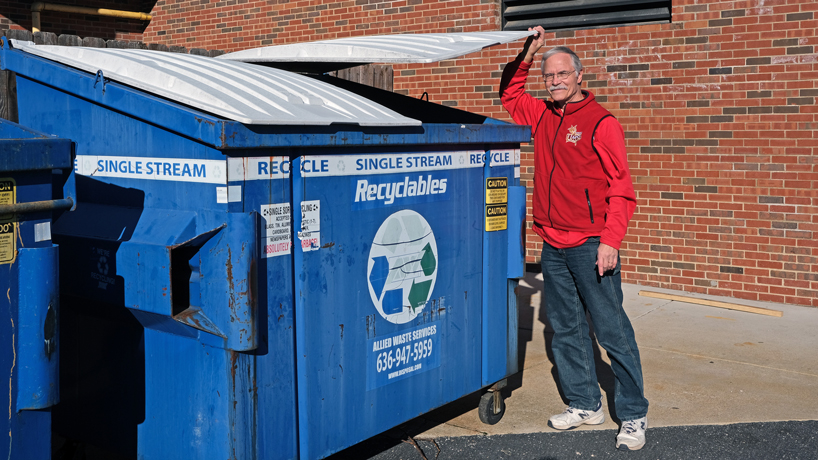 Emeritus Professor of Supply Chain and Analytics Joe Martinich was named a 2018 Creve Coeur Citizen of the Year for his contributions to the city’s Green Business Certification Program and Energy and Environment Committee. (Photo by August Jennewein)

For 20 years, Joe Martinich has been a go-to expert on recycling and reuse across Missouri.

He’s completed local and statewide studies on the economic impacts of recycling, authored numerous papers and taught classes on business sustainability. Now, four years after retiring from the University of Missouri­–St. Louis, Martinich is busier than ever.

Three days a week, the emeritus professor of supply chain and analytics rolls up his sleeves and digs into recycling dumpsters around Creve Coeur. At this pace, he’s rummaged through hundreds of business containers in the community, and he has no intention of slowing down.

The pair is the driving force behind the city’s growing Green Business Certification Program, which was created to recognize businesses and nonprofits that are making meaningful efforts to reduce their environmental footprints. 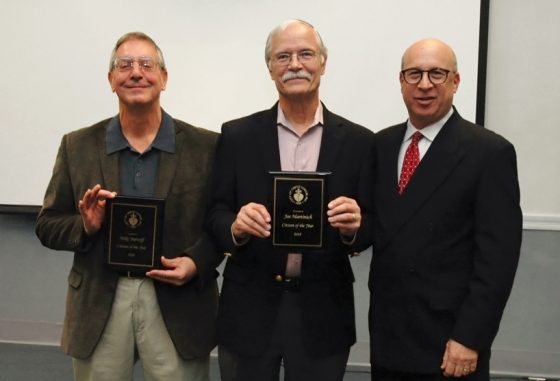 Martinich and Barzoff were recognized for their community contributions in December when Mayor Barry Glantz presented them with Creve Coeur Citizen of the Year awards.

“Joe Martinich and Mike Barzoff see Creve Coeur’s potential as an environmental leader,” Glantz said in a statement. “Thanks to their hard work and consideration put into the Green Business Certification program, we are closer to seeing their vision become reality.”

Martinich, a 40-year citizen of Creve Coeur, first became involved in civic activities when he joined the Energy and Environment Committee in 2015. In the years since, he’s chaired the committee, helped create the certification program and connected Creve Coeur leaders with much of the knowledge and resources he’s acquired as a researcher at UMSL.

Part of Martinich’s efforts include visiting local businesses to provide guidance and talk through efficiency guidelines while also evaluating how fast recycling bins fill up and their contamination levels.

“We have fun joking with each other about being dumpster divers, about being trash rats,” he said. “We’ve gone to about half the businesses and have a pretty good reading on their recycling – better than they do.”

Martinich and Barzoff are now prioritizing the businesses that are recycling well and are speaking with owners and managers about additional sustainability efforts.

“Joe’s leadership of the Energy and Environment Committee has been nothing short of spectacular from the beginning,” Councilwoman Alexis Travers said. “He has encouraged and supported the committee to achieve several great milestones, most recently the guidelines the city is adopting for renovations and new construction.”

While Martinich has only focused his research on environmental topics during the second half of his career, he’s long been interested in the field. His first few jobs out of college were in engineering, but he often found himself with assignments focused on revolutionizing industrial processes.

“I’m not sure I consciously tried to do it, but I kept having opportunities to get my fingers in some environmental issues,” he said. “I worked in dirty industries. I started off in the steel industry, then paperboard packaging, then oil and chemicals. I was able to get in on some environmental stuff to try to clean things up. When I got into the academic world that had always been sitting there. My research was entirely different. I wasn’t able to do that for about 20 years.”

Then, in 2001, a project for the St. Louis-Jefferson Solid Waste Management District brought him back. The district hired him to study the economic effects of waste reduction, which showed that 40,000 jobs in the region were supported by recycling and reuse. This work then opened additional opportunities for research, consulting and volunteering.

“Just because of pure serendipity and my connections with these things over the last 15 or 20 years, I’m able to be something of a point person and bring people together in the region,” he said. “It’s been nice to have my personal interests and my research interests finally fitting together.”