In the early part of the 20th century, Yale physicist John Zeleny was the lone pioneer in electrospray studies, which he pursued in connection with his interest in electrical discharges in gases. Work on the technology, though, was pretty quiet for several decades until John Fenn began work on electrospray ionization — also at Yale — in 1968. That research didn’t get much attention until the late 1980s when he applied the technology to mass spectrometry, an innovation that led to his winning the 2002 Nobel Prize in Chemistry. Fenn was key in the founding of Yale’s Chemical Engineering Department, and spent most of his career here.

Today, work on electrospray technology continues in the labs of Juan de la Mora and Alessandro Gomez, both professors of mechanical engineering & materials science. Together, they’re finding new ways to use electrospray and they’re applying it to advance innovations in space flight, drug delivery, energy, and other fields.

So, What is Electrospray?

Electrospray involves combining a sample with a highly conductive fluid, which is pushed through a small electrically charged needle, causing the sample to exit in the shape of a cone (known as the Taylor Cone). The tip of the cone forms a tiny jet that breaks into a fine mist of uniform-sized charged droplets at low flow rates. The size of the droplets it produces can be controlled from several nanometers to hundreds of microns. 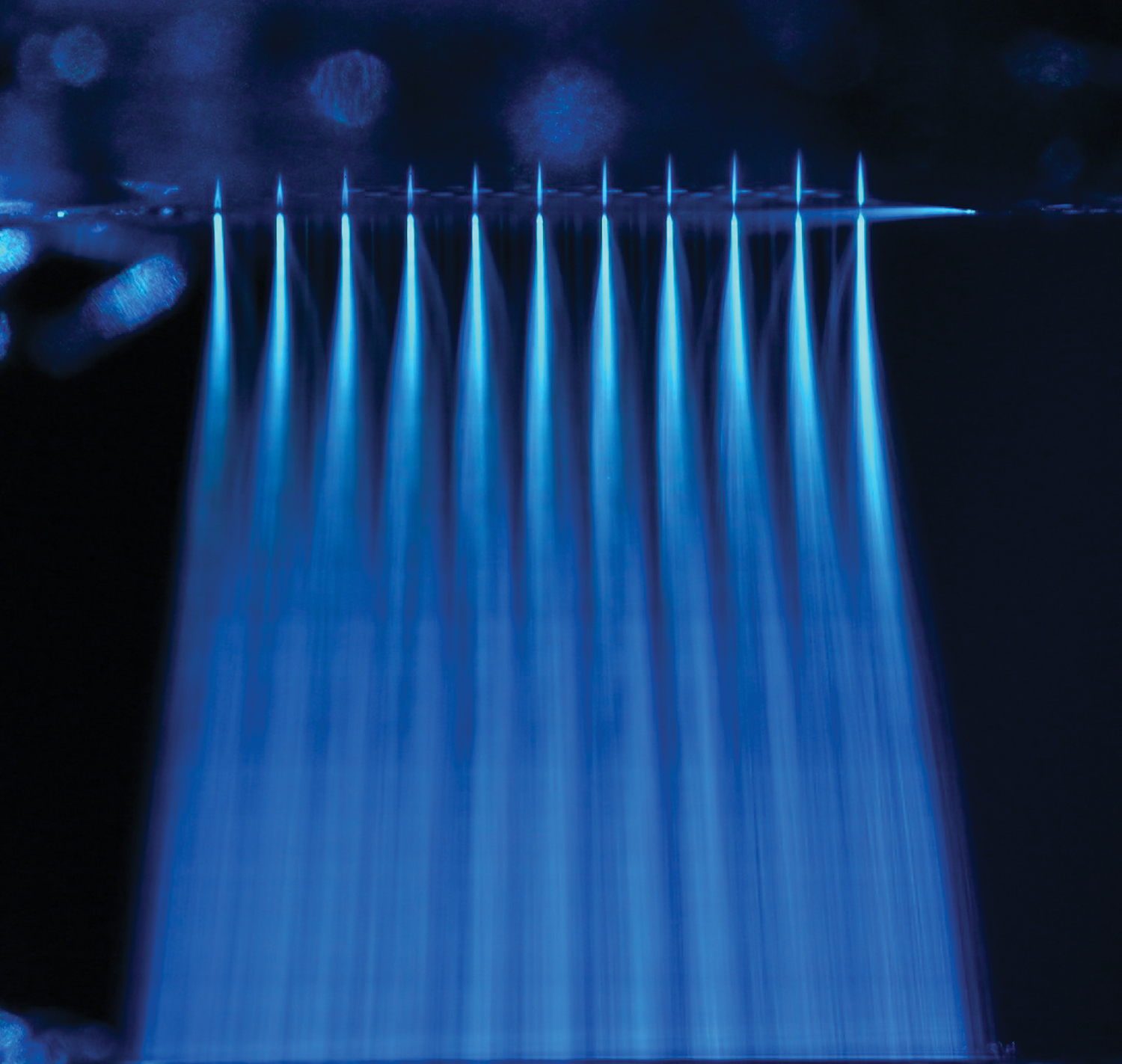 Applications for it were fairly limited until Fenn began working with it, and applied it to mass spectrometry. Mass spectrometry, which accurately determines the mass of ionized molecules, previously couldn’t be used to study large biological molecules because they couldn’t be ionized. Fenn’s electrospray ionization method changed this, and the field of biology benefitted from the precision and speed of mass spectrometry.

“The jet would form tiny drops, and then the drops would themselves explode multiple times,” de la Mora said. “Each one of these drops now explodes because the charge is concentrated as the liquid evaporates. So, you have these multiple stages of atomization and, at the end, you have such tiny drops that they only contain one molecule.”

Observing what electrospray could do inspired de la Mora’s line of research.

“When I saw the beauty of the thing in Fenn’s work, my students and I contributed a few articles clarifying some of the physics of the phenomenon,” he said. “In collaborating with Fenn, I was sucked into researching some of these applications.”

One of the lines of research that de la Mora took up was applying electrospray to developing an “electronic nose.”

“We built a mass spectrometer system to smell volatile things of very, very low vapor pressure, and it’s 10,000 times more sensitive than a dog’s nose,” he said. Fenn first proposed the idea, but never got much of a chance to develop it. Following his lead, de la Mora and his brother Gonzalo Fernández de la Mora in Madrid, Spain have further developed this technology for detecting explosives and vapors emitted from human skin and from hidden explosives.

Alessandro Gomez, who started as a Yale faculty member in 1989 after serving as postdoctoral researcher in chemical engineering, also found himself drawn into the field of electrospray. “Fenn was a dynamo of ideas and his enthusiasm for his research on the electrospray was contagious,” Gomez said. “So, when the time came for me to spread my wings, I figured out a different angle to work on the electrospray and chart my own path out of Fenn’s shadow.” Gomez recalled the pride he felt when Fenn used in his Nobel lecture an image that Gomez’s lab captured of a charged droplet fission, which is at the root of the mechanism of electrospray ionization.

Gomez’ research involves his development of “multiplexing,” a technique that he has honed over the years in which multiple electrospray devices work in coordination with each other. Because a single electrospray device doesn’t produce a powerful force, its use had for years mostly been limited to mass spectrometry. Multiplexing increases the throughput and broadens the potential applications of electrospray.

Electrospray technology is remarkably versatile, Gomez noted. He has concentrated on particle synthesis for numerous applications. Invaluable to the field is the

ability to generate and control the size of particles at adequate flow rates for specific applications. Multiplexed electrospray devices show great promise for this, and Gomez has used it in a number of ways.

“It has the unique ability to generate nanoparticles that you can tailor to many applications,” Gomez said. “The selection of the material is application-specific, but the fundamentals of the technique are always the same.”

The versatility of the technique means that he has had a wide range of collaborators.

“When people come to me with a need for certain things that I think electrospray is well-suited for, that’s when I intervene and scratch my head and try to figure out how to produce or synthesize the particles they need,” he said.

Gomez recently worked with chemistry professor Hailiang Wang to develop more efficient batteries. He used an array of electrospray devices to synthesize very small particles of metal-oxide nanomaterial for one of the electrodes of a lithium-ion battery. “This is very important because a lot of electrochemistry is surface-related, so the smaller the particles that make up the electrodes, the more surface is exposed to whatever treatment you apply.” 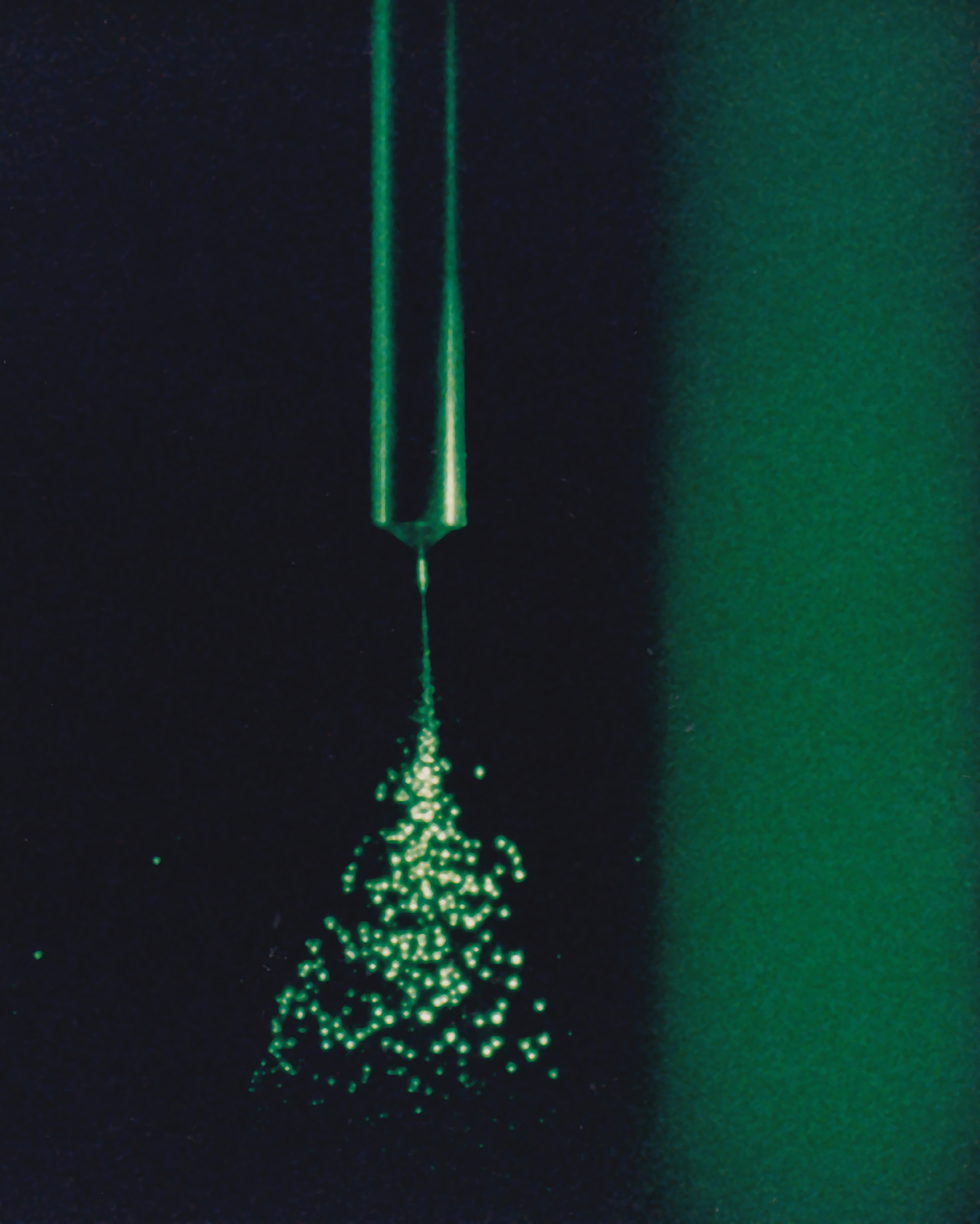 Publishing in Advanced Materials, Gomez and Wang were able to verify the battery’s improved performance and its potential to streamline the technique to reduce the cost of large-scale fabrication.

Working with the lab of Tarek Fahmy, associate professor of biomedical engineering and immunobiology, Gomez and his team took on the task of synthesizing nanoparticles for the delivery of cancer drugs. Electrospray was critical to ensuring that the particles were of uniform size.

“These polymer particles are important because they lead to a controlled drug delivery,” Gomez said. “Instead of going through spikes in the delivery of the drug, they can deliver it steadily and in a better controlled way. We spent a fair amount of time preparing the witches brew — that is, achieving the right properties that lead to those particles.”

The particular biomedical applications for this synthesis technique required very high particle production rates — far more than what could be generated from a single source. To do so, Gomez again applied the multiplexing technique. It’s a tricky process because it requires getting all the devices to work together. The results, though, proved worth the effort.

“Looking at its delivery rate and time, it turns out the technique is a significant advance over the standard industry method, which is a solvent evaporation technique that is much less controlled.”

“Suppose you wanted to go on a space mission in which you first go to Mars,” de la Mora said. “Initially, you may take your time to get there by launching very little propellant at very high speeds.”

But once at Mars, you have to maneuver to change your orbit and use the gravitation there to be launched to the next planet. This maneuver, however, normally requires considerably higher thrust. Unless you have two motors or are infinitely precise, you are lost. Fortunately, a thruster with electrospray technology would be able to span a broad range of thrust forces with modest changes in power. That’s because it would be able to adjust the size of the droplets emitted, which changes the amount of force.

Funded by the U.S. Air Force, de la Mora and Gomez worked on the concept. With multiplexing, they were able to achieve the amount of power and versatility they needed.

“There’s too little thrust from a single electrospray, so you would need a few hundred of these electrosprays for the type of missions that NASA has in mind,” Gomez said.

And because the nozzles for the electrospray devices need to be created with great precision, the researchers employed microfabrication similar to what’s used for creating microchips.

“We can have small nozzles carved with great precision into a silicon wafer of the dimension,” Gomez said. “To make sure each nozzle behaves as the next one, you want to have precise sizing of the nozzles.”

Creating a prototype this way is pricey, Gomez noted, but once you have the formula down — the right spaces and correct dimensions, for instance — it can be mass-produced at a reasonable cost.