Maurice Culot, a Paris-based architect, urbanist, theorist and critic who was at the forefront of the creation of the modern traditional movement, influencing the thinking and practice of architecture for generations, will receive the 2019 Richard H. Driehaus Prize at the University of Notre Dame.  Established in 2003, the $200,000 prize honors lifetime contributions to traditional, classical and sustainable architecture and urbanism in the modern world.

“Maurice Culot has had a remarkable influence on generations of architects and urbanists, leading the retrieval and dissemination of knowledge about what makes a city vibrant and livable,” said Michael Lykoudis, Driehaus Prize jury chair and Francis and Kathleen Rooney Dean of Notre Dame’s School of Architecture. “From publications, competitions and prizes to the work of his own practice, Culot has made immense contributions to the improvement of cities around the world.”

A native of Charleroi, Belgium, Culot attended the prestigious L’École de la Cambre in Brussels. Upon graduating in 1964, he completed a residency at the Frank Lloyd Wright Foundation, Taliesin West. From those experiences, he went on to pursue an academic career as a teacher and theorist whose writing has had far-reaching impact. Culot is president of ARCAS Architecture & Urbanism, with associate offices in Paris, Belgium and Poland. ARCAS focuses on the construction of new neighborhoods and urban extensions with designs rooted in the history and culture of the particular region.

The jury citation states, “Culot’s organizations and collaborations in publications, counter-proposals and prizes, as well as his teaching and lecturing worldwide, have influenced generations of architects and urbanists. Culot made it possible to recover the knowledge of the elements and principles that have defined the best urban environments across time and place that was nearly lost, providing a brighter future for cities, towns and villages around the globe.” 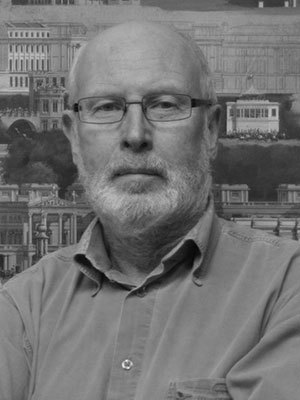 The Driehaus Prize will be presented to Culot on March 23 (Saturday) at a celebration in Chicago. The award ceremony will also honor Carl Laubin, a renowned painter in the classical tradition, who will receive the $50,000 Henry Hope Reed Award — given to an individual working outside the practice of architecture who has supported the culture of the traditional city through its architecture and art.

“With his stunningly detailed capricci, Carl Laubin has brought another dimension to the work of architects both past and present, allowing a glimpse into a beautiful world, sometimes real and sometimes imagined,” said Richard H. Driehaus, founder and chairman of Chicago-based Driehaus Capital Management LLC. “Both Laubin and Culot have been instrumental in redefining classicism in a modern context.”

“In this digital age, Laubin creates beautiful paintings by hand with extraordinary skill and an ability to connect his painting to a larger body of knowledge. His work expresses ideas that embrace architecture and urbanism as a continuity, celebrating the commonality of cultures through time and place,” according to the jury citation. It continues, “Laubin’s work reflects the complexity of both the structure of the painting and the composition of the buildings, with each building relating to the others and to its context. Through the thematic and formal relationships in his paintings Laubin asks us questions about both how the world is and how it ought to be.”

After receiving a Bachelor of Architecture from Cornell University, Laubin moved to London in 1973 where he worked for a number of architectural firms. While working for Jeremy Dixon, Laubin was encouraged to make his first architectural paintings, going on to illustrate the firm’s redevelopment of the Royal Opera House. In 1986, he fully devoted his career to painting. Laubin is perhaps best known for his architectural capricci. While his work centers on architecture, it includes many landscapes, paintings of sculpture and occasional portraits.