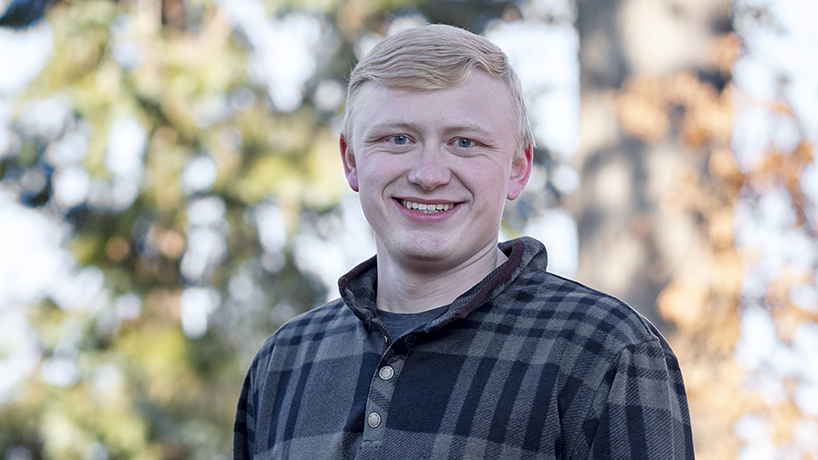 Optometry student Porter Swartz spent five years crafting a canoe by hand with the help of his father and uncle. (Photo by August Jennewein)

Two weeks before the fall semester began, Porter Swartz stood on the banks of Long Lake in Wisconsin and cracked open a bottle of champagne.

He tipped some out onto the bow of his canoe and, along with his father, slid the vessel into the water for its maiden voyage.

For more than five years, Swartz had been striving for that moment.

The University of Missouri–St. Louis College of Optometry student had been building the canoe since his senior year of high school. Representing greater than 250 hours of work, the 19.5-foot craft is comprised primarily of redwood with white ash and black walnut accents. Made with help from his father and uncle, the canoe is a literal, and seaworthy, monument to the family bonds that have inspired and supported Swartz’s life and career ambitions to date.

“It’s a really cool sense of accomplishment when you first take something that you built, and you get to use it on the water,” he said. “It’s something that I’m always going to be able to have for the rest of my life. I have so many memories from working with my dad and uncle and getting to hear stories about their lives that I had never heard before. It’s something I can hold onto and cherish with my family for generations to come.”

Swartz spent summers at Long Lake and considers it near to his heart. His whole family, including his 87-year-old grandfather, gathered together to witness that inaugural test and celebrated together afterward with a fish boil.

“I wanted my father and I to be the first ones to paddle as we were the main builders of the canoe,” Swartz said. “First getting into it, it’s a feeling that’s indescribable having built something from a massive living redwood. The canoe is truly a fine piece of furniture on the water.”

Swartz first learned the basics of woodworking in his high school shop class. But the project’s real progenitor was Swartz’s uncle, Dick Prine, a master craftsman who embarked on a series of canoes that he periodically donated to nonprofits, such as Trout Unlimited, for fundraising purposes. 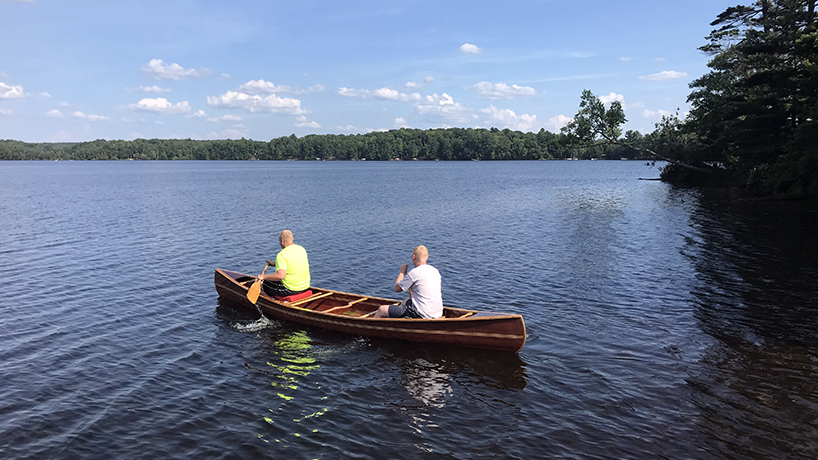 Porter Swartz and his father test out the results of their hard work two weeks before the start of fall semester. (Photo courtesy of Porter Swartz)

“In my uncle’s garage, there’s always at least two canoes lying around and one in progress,” Swartz said. “When I would come over there, I used to see these elegant canoes sitting on the racks. They were works of art, absolutely beautiful. It’s something that I’ve always seen him do and build, and I wanted to be a part of that.”

Swartz worked on his canoe during school holidays and weekends while an undergraduate at the University of Wisconsin-River Falls. Prine guided Swartz and his father for the majority of the of the project, then the father and son moved the canoe home for the final touches. They finished off with layers of fiberglass, epoxy and a UV inhibitor varnish.

The completed product clocks in at around 80 pounds and, to Swartz, feels almost indestructible and capable of carrying any load.

“When launching a canoe for the first time in the water, one hopes it will not only float but equally disburse its weight on the water,” he said. “I thought it would flex and crack slightly because it’s adjusting to the water, but it didn’t, and I was kind of surprised. It goes to show how well it was all molded and formed from the beginning.”

Though one might assume otherwise, Swartz has been more of a recreational canoeist throughout his life rather than a diehard enthusiast. However, he loves the outdoors and regularly bikes, hikes and snowshoes around his hometown of Menomonie, Wisconsin.

Growing up, Swartz loved studying subjects in biology and, in high school, began talking with family members in medical professions to get a feel for their day-to-day jobs. Optometry piqued his interest, and he shadowed optometrists during college to solidify that thinking.

“I knew I really liked health care and medicine,” he said. “The eyes are so fascinating to me because they’re such a unique organ in the human body, allowing one to assess an individual’s health without breaking through the dermal layer. Many complications in the body, a lot of them systemically, can show up in the eye, and it’s really pretty amazing.”

Swartz applied to a few optometry schools and felt drawn to the welcoming attitude of the professors and the “homey” feeling at UMSL. Though he still has more than two years of school ahead of him, he’s considering specializing in chronic dry eye.

“I know a lot of people suffer from dry-eye issues, and I personally have had very bad experiences with dry-eye, so I know how frustrating that can be,” he said. “I think it’s something that’s manageable if people take the right steps in treatment, and it can improve your quality of life a lot.”

Swartz is unsure if he wants to do a residency, but he’s sure he’ll be heading back to Wisconsin or nearby Minnesota after graduation. Living around his family would be a plus, and he’s looking forward to tackling future collaborative woodworking projects with his father.

“I have a love and passion for antiques and history,” Swartz said. “A couple years back I bought two old Thompson Take-Along boats from the 1950s. They are little lightweight boats, which are 12 feet in length, that I’ll eventually put an old 3-hp outboard motor on. I want to restore those boats and bring them back to life. My dad is also currently building a 14-foot sailboat that will sit two people. This canoe kind of got us on a whole new hobby we enjoy doing. That was our jumping-off point.”