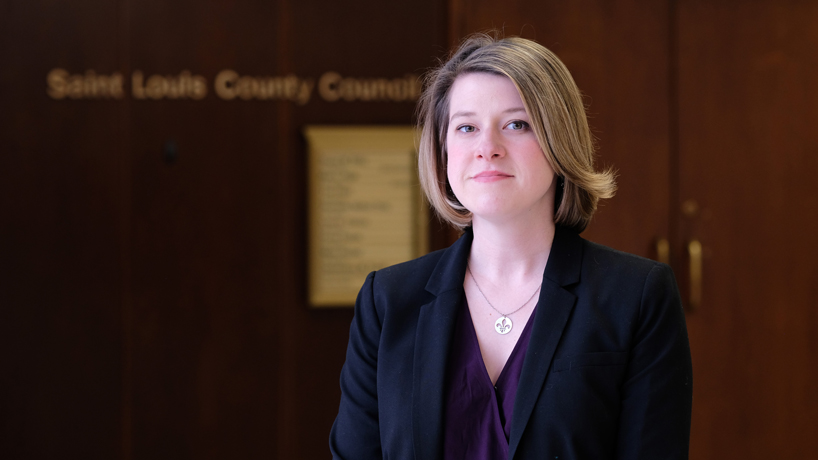 Lisa Clancy, who earned her BSW from UMSL in 2008, launched a successful campaign for the District 5 seat on the St. Louis County Council because she was eager to offer a fresh perspective on better serving everyone in the region. (Photo by August Jennewein)

Lisa Clancy knows what people probably thought about her St. Louis County Council candidacy when she first threw her hat into the ring last spring.

She was challenging two-term incumbent Pat Dolan for his District 5 seat in the Democratic primary. She was a political newcomer and a generation younger than anybody else on the council.

She didn’t seriously think she could win, did she?

“I was a serious candidate from the beginning,” Clancy said. “Campaigns take a lot of work, time and energy. I wasn’t doing this just to make a point. I was doing this because I really wanted it.”

Clancy beat Dolan by more than 20 points in the August primary, ran unopposed in the November elections and took her seat on the council on Jan. 1. For the next four years, she’ll represent constituents from more than a dozen municipalities on the seven-member board.

The University of Missouri–St. Louis School of Social Work graduate and former associate director of the UMSL Community Innovation and Action Center made the successful jump into politics by continuing to do what had made her an effective community organizer: listening, doing the legwork and being open to new ideas.

“The biggest reason I ran was I’m impatient,” Clancy said. “I really love St. Louis. I’m proud to call St. Louis home, but I think there is still a lot St. Louis can do better to be more collaborative as a region and also to make sure we’re better serving everyone, particularly by being intentional about including the voices of people who have been traditionally shut out of opportunities, access and, even, policy-making. There was a really ripe opportunity for a different voice.”

Clancy grew up in Webster Groves and studied for a semester at DePaul University in Chicago before returning home and enrolling at UMSL. She worked her way through school, serving as a nanny during the day and taking night classes.

She felt a pull to social work because of her interest in pursuing a career in social justice and earned her BSW in 2008 before going on to receive her MSW from Washington University in St. Louis. Clancy also made her first forays into politics while at UMSL, working as an intern on Claire McCaskill’s first U.S. Senate campaign in 2006 and serving an internship at McCaskill’s Washington, D.C., office the following summer.

“The students and the people at UMSL added as much to my experience as anything else,” Clancy said. “Being able to be in class with people who came from all walks of life and were at different stages of degree completion – people that were nontraditional, returning to school, starting later – I thought that really added to my experience. I don’t know that I would have gotten that experience at any other place, certainly not where I had been.”

When Social Innovation St. Louis formed in 2016, executive director Paul Evensen made Clancy his first hire. The new organization had a stated goal of synthesizing community resources to champion bold initiatives for the betterment of the region, and Clancy, with her background in social work and deep ties to St. Louis, was the perfect addition.

Within 90 days, she founded Thread STL, envisioned as a coalition of community resources working together and learning from each other. Now the group contains nearly 100 members from more than 40 organizations.

“Not bad for starting with zero,” Evensen said. “She had to reach out, make friends with the people who lead these partnerships and create a professional association for them. Rather than being an exercise in theory, it was going to get together the people we claimed we hoped to serve, organize them so we could be accountable for doing so and ask them what they needed. That, quite frankly, speaks to her strengths: listening, synthesizing what people are saying from lots of points of view, getting consensus and then organizing people to actually take action, so something happens from that.”

UMSL hired Evensen last spring, right around the time Clancy filed to run for office, and combined the work of Social Innovation STL with the foundation of the former Public Policy Research Center to form the CIAC. Clancy was pleased to be working at her alma mater and relished the opportunity to interact with instructors, such as Professor of Economics Anne Winkler, who had made an impact on Clancy during her undergraduate career. But, if everything went according to plan, that experience would be short-lived.

Evensen said Clancy made every effort to keep her UMSL and campaign work completely separate, and the race never came up at the office. That is, until the morning of Aug. 8.

“It was kind of surreal,” Evensen said. “We’re both at work and it’s like, ‘So … councilwoman … what do you think about the results?’”

Because she was unopposed in November, Clancy got to spend the nearly five months between the primary and her swearing in preparing herself for the job. She attended county council meetings, met with her future colleagues, department heads and County Executive Steve Stenger and continued to hone her priorities by connecting with the community members who had helped her win the election.

She stepped down from the CIAC at the end of 2018 because, even though county council is technically a part-time job, it’s really not if she’s doing it the way she wants to. The CIAC hired Kiley Bednar, project manager at the Forum for Youth Investment, to replace Clancy as associate director, though Clancy will still do some contract work for the center.

Her main focus, however, will be pushing reforms in racial equity, more resources for underserved families, fair wages for workers and transparency and accountability within the county government.

“There are going to be some big conversations coming down the pike pretty soon about what it looks like for our region to be more collaborative, working together as leaders in government across city and county lines but then also, even within St. Louis County, across municipal lines,” Clancy said. “I am up for thinking about being imaginative about what that looks like because I think that there are probably some changes that can be made to make sure that everyone in our region is better served.”