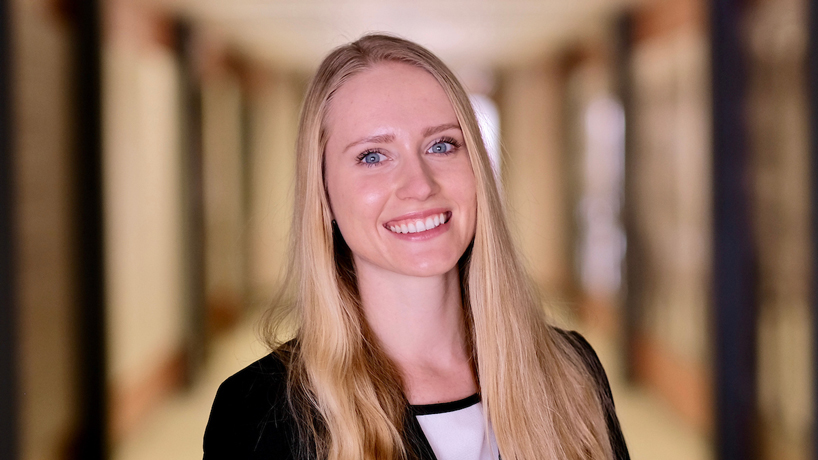 Stefaniya Ivanova is set to begin a temporary job at TD Ameritrade after graduating with degrees in mathematics and economics in December. (Photo by August Jennewein)

Stefaniya Ivanova’s had a checklist of tasks to keep her busy since celebrating commencement in December.

The most important have been finding a new apartment, buying a car and finalizing the details of an introductory job at TD Ameritrade, which she’ll begin next week.

It’s allowed the University of Missouri–St. Louis graduate to avoid fixating too much on the anxiety that can’t help but accompany so many life changes.

“This is one of the scariest moments in your life, when you go from college to what’s next,” Ivanova said. “Because all my life, I always had a plan for what I was doing.”

Fortunately for Ivanova, her time at UMSL has her well prepared to navigate what she has in front of her. She’s showed herself adaptable to new situations since coming to the United States to study from her home in Moscow. The former Tritons golfer also has proved she’ll invest the time to excel in any pursuit she chooses. 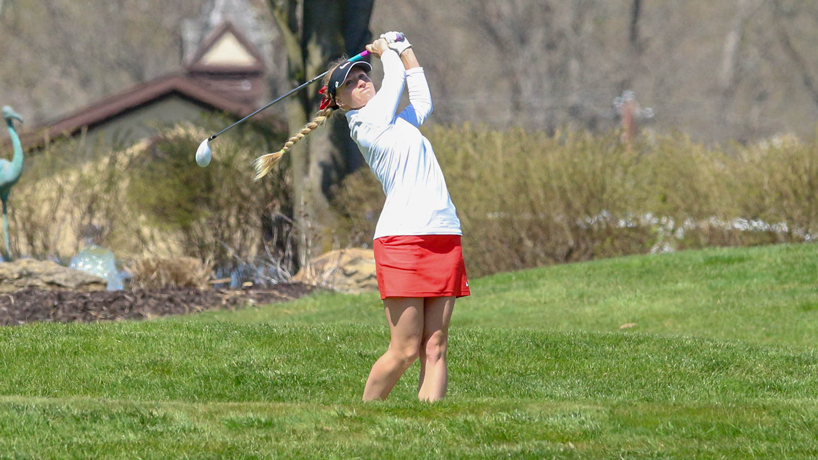 Stefaniya Ivanova won the Oak Terrace Fall Invitation and Gilda’s Club Laker Fall Invitation during a standout career on the course for the Tritons. She was a four-time All-Great Lakes Valley Conference performer. (Photo courtesy of UMSL Athletics)

Ivanova was a four-time All-Great Lakes Valley Conference selection on the course, helping UMSL finish in the top 10 nationally in each of her last two collegiate seasons. She won two tournaments individually during her playing career.

“I thought it was pretty impressive with all the travel being a student-athlete,” said Anne Winkler, the chair of the Department of Economics, who taught Ivanova in Introduction to Econometrics. “She sure made it look easy, and there’s no way that that it could have been.”

Ivanova’s focus and ability to balance multiple responsibilities were forged over more than a decade working to get to this point with golf serving as her gateway.

She had first tried tennis – a far more popular sport in Russia – like her older sister, Diana, a former collegiate standout at Old Dominion University. But Ivanova was turned off by all the running the game required.

She took much more quickly to golf at age 9 when her mother enrolled her in a summer children’s academy at the first 18-hole course opened in Moscow.

“All the people there, we were kind of like a family,” Ivanova said. “It was a good environment, and we were in nature all the time. Golf also lets you take your time, which is one of my qualities.”

It soon became more than a pastime.

Ivanova had watched her sister, four years her elder, ride tennis to a college scholarship in the United States. With Diana encouraging her, she set out to do the same with golf when she was in high school.

By age 15, she’d ventured overseas to test her skills as part of a Russian national team that spent more than a month training in Florida, even playing in some Future Collegians World Tour junior golf events. The next year, she represented Russia in an under-16 world championship tournament in England.

With those credentials on her resume, she was well positioned to reach out to college coaches to inquire about opportunities to play. Former UMSL coach James Earle ultimately decided to extend her a scholarship offer, and she enrolled in 2014.

She originally planned to study business administration but switched to more specific subjects that fit with her interests.

Ivanova comes from a family of engineers and has always been a strong student in math. For her, it also really did prove to be a universal language – something she could excel in while she was still working to increase her comfort level communicating verbally in English.

Picking up economics and its many theories from lectures and class discussions proved more difficult because of the lingering language barrier, though it had subsided significantly by her third semester on campus.

She found help when she needed it.

“Here, professors are very welcoming, and they want you to learn and say, ‘OK, if you don’t understand something, come ask me. I have office hours,’” Ivanova said. “They encourage you.”

They were also understanding of her travel schedule for golf, which sometimes prevented her, particularly in the spring, from attending classes.

Growing up in Russia, she had not always found her teachers to be so accommodating.

That was not the only cultural difference Ivanova observed during her time at UMSL. Rather, they surfaced frequently, including among members of her golf team who hailed from Spain, Sweden, France and Germany in addition to the United States.

The diversity she experienced at UMSL, not only on her team or among other student-athletes, is one of the things she appreciates most. She said her best friend came from Saudi Arabia, her boyfriend from New Zealand, and she built meaningful bonds with a number of Americans.

“It was actually the best decision in my life,” she said of coming to UMSL, “because I really became much more open-minded, and I really liked it here. I met so many new people and learned so much.”

Ivanova now wants to do more learning while extending her time in St. Louis. She got an introduction to the financial world through an internship last semester at TD Ameritrade, and that helped her land a temporary role with the company through tax season with the possibility to do more.

She’s also been applying for other jobs. Her visa allows her to work in the United States for up to one year, and because she has a degree in a science, technology, engineering or mathematics field, she can apply to extend that stay two more years.

Ivanova would like to use that time to decide what course she wants her career to take. Maybe that could be working as a broker. Maybe she could pivot to being a financial analyst.

She likes the idea of adding an advanced degree once she has a firmer path.

“I’m not sure if I would want to stay in the United States for the rest of my life,” Ivanova said. “But you never know.”

A world of possibility awaits.