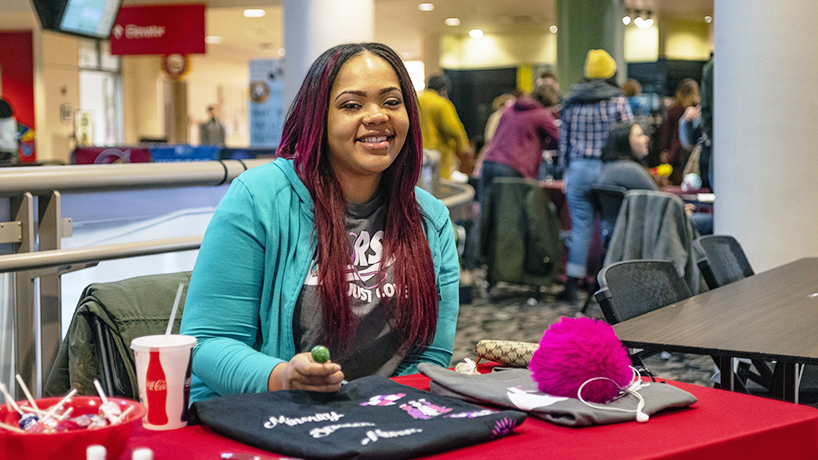 Janssen Blackmon may have walked into her first Minority Student Nurses Association meeting for extra credit, but she stayed for the people.

“I had that moment when I was like, ‘Oh, wait, this is actually something that I’m really passionate about,’” she said. “I actually enjoy coming to these. I actually enjoy spending time with these people.”

It did not take long for the University of Missouri–St. Louis College of Nursing student to find herself fully enmeshed in MSNA. Then, at the beginning of her senior year, the previous president’s term expired. Though Blackmon was initially concerned that the responsibility might negatively impact her grades, her friends encouraged her to try for it.

So she ran. Then she won. And she has spent her tenure so far fortifying what makes the organization great.

“It was really exciting when I found out that I actually did win and was the president,” she said. “Before MSNA, I didn’t really feel a sense of connection to my classmates. I’ve noticed that it makes us stronger and builds a bond between us.”

Providing support for minority nursing students while fostering connections among members are MSNA’s main purposes. To achieve this, the organization hosts activities that are united by a theme of holistic betterment. They run the gamut from monthly meetings, personal well-being activities such as Zumba classes, speakers, networking events and community service opportunities.

“It’s not just an organization where you just go to a meeting, and they’re like, ok, you’re a part of it,” she said. “We try to challenge you. We try to set goals for you and make sure that you live up to those goals. We don’t let our members slack, and if you feel like you aren’t doing as you should be, we’re going to call you out on the that and make sure you do go as high as we know you can go.”

Doing more than just showing up is critical to Blackmon’s vision for MSNA. After assuming the role, she met with other officers and set goals of recruiting members and bringing in speakers from the Black Nurses Association, both of which they have already achieved. They also wanted to create an environment of advancement for the members.

Blackmon’s approach to membership is inclusive, reaching out widely to all levels of nursing. In the majority-female College of Nursing, MSNA also provides space for male students and even extends out to minority nursing students at other area schools without similar organizations. This is in recognition that nursing is a challenging discipline, and all students need help at times.

“Some students have expressed to us how scared they are, and they don’t know what to expect, and they think things are getting way more challenging, classes are getting harder,” she said. “We tell them they’re going to make it.”

This supportive environment parallels that of Blackmon’s family, whose encouragement helped her through the gauntlet of nursing school. In difficult moments, she digs into her past for motivation, reminding herself that she has wanted to be a nurse since middle school. Nursing seemed like a perfect career because Blackmon has always been preternaturally comfortable in hospitals.

“If I was sick and I would go to the hospital, even before they gave me any medicine or anything, I would feel better,” she said. “It always felt like it was where I needed to be, and I always admired good nurses who would come in and you’d feel their energy, and you’d feel that they were there for a reason, and you were their No. 1 priority. They wanted to help you. They wanted to figure out what was wrong and how to treat it. That just always stuck with me. I want to do that. I want to be that for someone.”

Blackmon deliberately prepared for nursing school by attending high school health care outreach programs. When the time came for college, she decided to spend her first years learning at St. Louis Community College to save money before transferring to her first choice, UMSL, to complete her BSN.

Now on the other end of her plan, Blackmon is pondering her next steps. After she graduates in May, she hopes to be outside of the St. Louis region, maybe as a traveling nurse. Pediatric nursing, in particular, appeals to her. Regardless of where she ends up, it is clear Blackmon will continue to make connections and provide support for others.