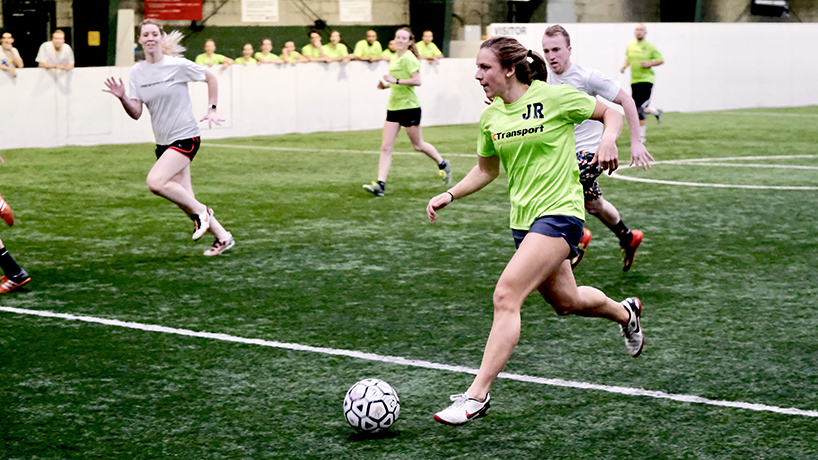 Optometry student Kailey Utley finished her rush with an assist for a goal, helping advance her Vetta Sports co-ed recreational team, the Jolly Ranchers, to its championship game, which it won on Sunday. (Photos by August Jennewein)

Kailey Utley has become something of a media darling.

Even if it were possible to discount the plethora of St. Louis Post-Dispatch coverage from her days at Pattonville High School – where she was a varsity sports triple threat and soccer standout, who produced of hat tricks and two-goal matches that secured district soccer titles and won selection to the All-Metro, All-Region and All-Midwest squads – the writing doesn’t end there.

Since then, she’s popped up in NCAA publications, Big 12 Conference updates, semipro national titles and, yes, even UMSL Daily. But it wasn’t until last year that she got called up to the big leagues.

Over the summer, the University of Missouri–St. Louis student heard from her Fire and Ice Soccer Club coach, Lindsay Eversmeyer: There was a reporter from espnW, the women’s sports-focused site operated by ESPN, interested in writing about Utley. Would she be interested?

“And I said, ‘Sure why not?’” Utley recalled. “I never would have imagined that would happen. My family and friends thought it was neat, and a lot of people shared it, but ultimately, what they wrote about was how I’ve been living for the past three years, so it wasn’t anything too crazy.”

It’s easy to understand why the College of Optometry third-year student seemed like an attractive subject for espnW. In addition to her academic pursuits, Utley is a commissioned second lieutenant in the U.S. Army and, then, there’s soccer. After a dominant run as a forward on West Virginia University’s Division I soccer team, Utley joined Fire and Ice, a semiprofessional team based in Belleville, Illinois. She considers winning the summer 2017 Women’s Premier Soccer League national championship to be a standout moment in her soccer career.

At 5 years old, Utley first stepped onto the soccer field, and though she also played basketball and softball through high school, she decided to pursue soccer in college. 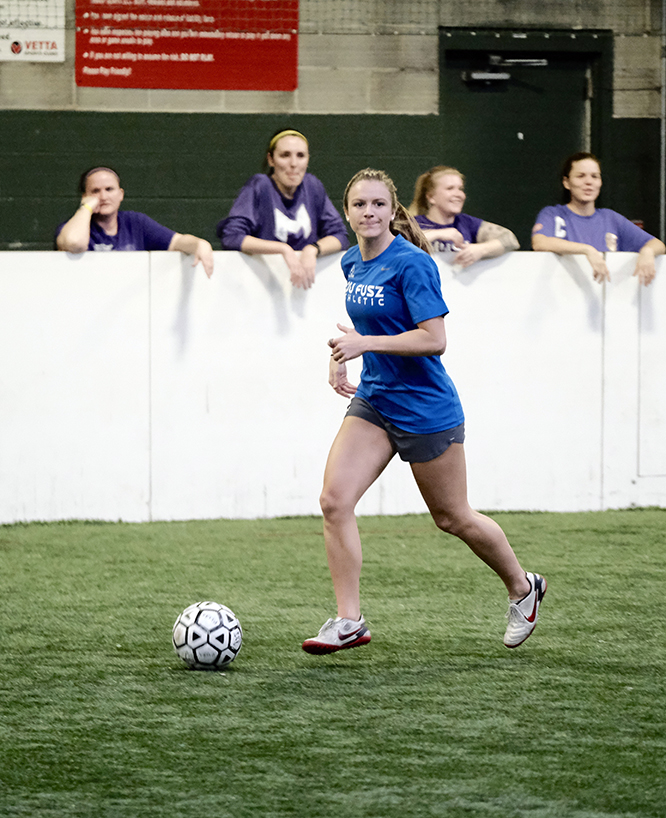 Both of Kailey Utley’s recreational soccer teams – the Lollipops women’s team shown above and her co-ed team – won their games on Saturday and the subsequent championship games on Sunday. (Photo by August Jennewein)

“I am, at heart, a competitor,” Utley said. “I knew I would be able to compete at the highest possible level, like (one of) the top 25 programs in the country.”

She did compete, helping West Virginia to some notable victories that included a hat trick in a NCAA Tournament Sweet 16 game that advanced the Mountaineers to the Elite Eight as well as a game-winning goal in double overtime that helped clinch the team’s third straight regular-season Big 12 Conference Championship.

After college, Utley thought her soccer-playing days were over until she was recruited via Facebook message by Eversmeyer.

“I didn’t have any plans for the summer before I was going into optometry school,” Utley said. “I thought that would be a great opportunity to stay in shape and still play the game and be part of the team and have a good time. The most special part about it is being part of a team, working beside other people toward a common goal.”

On the side, Utley plays recreationally in a Vetta Sports indoor soccer league. The trick to managing it all, she said, is scheduling.

“It’s kind of a way of life for me at this point,” she said. “You have to sacrifice some things, I guess. I could maybe have more of a social life or I could get more sleep or something like that, but it’s kind of automatic for me. I just write everything down in my schedule and stay disciplined.”

If playing both semipro and recreational soccer while in school wasn’t enough of a commitment, Utley also decided to apply for the F. Edward Hébert Armed Forces Health Professions Scholarship Program. She started the time-intensive application in April 2016, submitted it that December and was accepted the following March. The next month, she was commissioned into the Army and, after graduation, will serve for a minimum of three years.

Both of Utley’s grandfathers were in the military, and her brother serves as an Army Ranger, so she’s following a well-worn family path. But she didn’t consider that tradition when deciding to apply. After hearing a recruiter speak during orientation, Utley instantly resolved to go for the honor.

“Once I make my mind up on something, I just pretty much go after it, so that’s kind of what happened,” she said. “I knew there were only a couple people that were going to be chosen for it, and I was super excited and grateful that I was given that opportunity.”

Utley had already committed to St. Louis before deciding on optometry school. She missed her family, especially her three local nieces, while away at West Virginia. Though Utley had considered dentistry and orthodontics, she’d settled on optometry after career shadowing and was pleased to find that St. Louis was home to the UMSL College of Optometry.

“This is not something that I’m supposed to admit, but it was UMSL or bust,” she said with a laugh. “I did not apply anywhere else. I’m thankful to be part of the program. What I’m going to be doing with the rest of my life they’re teaching me every single day. They are providing me with the resources to become a great doctor and provide great patient care.”

Though she’s still pondering future specialties, Utley finds both disease and pediatrics intriguing. However, she acknowledges that her commitment to the Army means her location and practice will be out of her hands.

“I’ve probably grown up and changed a lot since I’ve been in optometry school,” Utley said. “Now that I’m older, I want to travel and see the world. In the Army, I think you move around every three years. I only have to serve three years, but if I were to serve longer, I think it would be neat to be on a base in Italy, Germany. That would be an extra perk.”

Until then, you can look Utley up in the classroom – or on the soccer pitch.