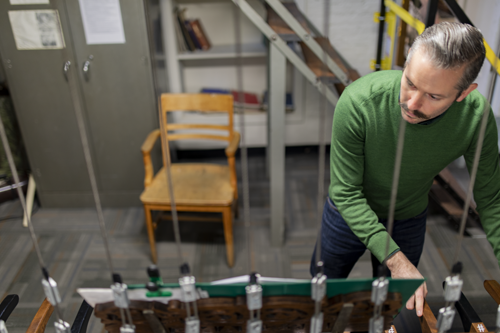 Jonathon Smith plays the chimes in Altgeld Hall. A recent renovation has made the future of the chimes stronger than ever. (Photo by Jesse Wallace.)

The clock struck 12:50 p.m. and the Quad teemed with students during passing period. High above them, in Altgeld Hall, Jonathon Smith moved quickly, organizing his sheet music. He knew what many of them would think—that a machine was playing the chimes in the tower. They couldn’t be more wrong.

Purposefully, with passion, Smith began to “play the tower,” so to speak. Playing the chimes is different than virtually any other instrument. It requires footwork. Smith glided from one end of the bell levers to the other, pressing them downward to adjust tension on the long lines that activated the clappers—metal balls within the bells. As the clappers swung and struck the chimes, the notes of “Hail to the Orange” pealed across campus.

This isn’t the first time the Altgeld chimes have been played, not even close. They’re almost 100 years old. But after a recent renovation took them offline, their comeback has been relatively quiet compared to the rather downbeat publicity that occurred when they went silent. Now, the future of the Altgeld chimes appears stronger than ever.

Smith is the first of a new lineage of chimes players. The lead player is now a position for graduate students in the School of Music who have been actively playing the bells. Smith oversees a registered student organization, Altgeld Ringers, which is dedicated to making the playing more organized.

The room housing the instrument has new walls and has been repainted. New emergency and safety systems have been installed, new flooring has been put in place to make the floor level, railings were installed and gates put in place along the steep sets of staircases. The Department of Mathematics also supplied the room with new furniture, a computer, printer and a scanner for music arrangements and other administrative needs.

The chimes instrument, as well as the practice playing console, were completely refurbished.

“It used to wobble, but it doesn’t anymore,” Smith said, of the chimes console. He’s been playing the chimes since 2011.

A new automatic system was also installed to keep the time, and changes were made to the chimes to ensure easier playing. 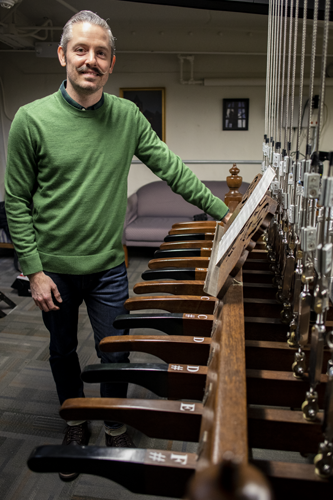 Smith poses next to the chimes player in Altgeld Hall. (Photo by Jesse Wallace.)

“(Playing the chimes) used to seem a lot more athletic than it does now. They actually did some work to make the playing less tiresome and smoother,” Smith said. “We’re really happy to be back to playing, happy to be back to playing renovated instruments, especially the practice console. This is a night and day difference, we practice everything here before we play it.”

While Smith and the rest of the chimes players have been grateful for the updates, Smith is committed to letting the history of the iconic place echo, too. Reminders of Sue Wood, who started playing the chimes in 1971 and served as chimesmaster from 1995 until the recent renovation, are all around.

“We have a ton of Sue’s music, like Hedwig’s Theme from Harry Potter. She never put her initials on it, but she wrote very tiny so you can tell it’s hers,” Smith said. “It’s a really neat thing to have this instrument up here, but (it’s also historical) and really unique to this school and our program here.”

“Every person that plays up here has probably left some remnants of their time here,” Smith added. “When I’m done here, my music will still be here.”

Illinois is one of the last schools to continue their chimes program, according to Smith. Many universities have implemented automatic systems or have failed to maintain their bells due to finances. But the chimes in Altgeld Hall have remained a unique fixture at Illinois. Players teach each other how to play the instrument.

“I learned how to play the chimes from Sue (Wood),” Smith said. “It’s not really a standardized instrument. There are only 15 bells, and all of the music we have we arrange ourselves. Most of our music, going back to 1920, has all been arranged by somebody here.”

The chimes themselves were created with the specific intent of playing Illinois Loyalty. But today, students can hear everything from the theme song of popular cartoon Futurama to classical harp tunes from the 1600s, a testament to how the chimes continue to adapt to modern times.

“So many students use Reddit and we hear a lot of complimentary things, we get song requests on our Facebook page, there’s a little more interaction with the digital media,” Smith said, adding that he is currently in the process of digitizing song arrangements. “The players all want to hold onto the integrity of what (Sue Wood) started.”

Since the initial renovations, public tours are no longer available. However, Smith is determined to share the charm of the chimes with the community and students, many of whom, like he himself once mistakenly believed, think the chimes are just some pre-recorded speaker. In fact, playing the chimes is a one-of-a-kind musical feat.

“Playing the chimes is much different than sitting down at another instrument because you have to move so much — you move your entire body,” Smith said. “It’s the action of moving and putting your body and weight into the instrument to play the notes. The building has to do with the acoustics. You’re playing the building.”