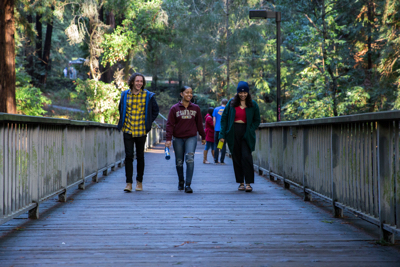 “When we develop our recruitment plans and work with our faculty senate committee on admissions and financial aid to finalize our admission policies, the focus of our conversations is all about enrolling students representing excellence and diversity who will become our future alumni,” said Michelle Whittingham, the associate vice chancellor for Enrollment Management.

The campus marked the first step toward building the Classes of 2021 (transfer) and 2023 (first-time), receiving 67,262 applications for fall 2019 enrollment. Most notably, the campus saw a 2.8 percent increase in the number of students wanting to transfer from a California community college, continuing the momentum built in the past several years.

The admissions team is now reviewing applications—evaluating students’ academic achievements and preparation in light of the opportunities available to them and their demonstrated capacity to contribute to the vitality and intellectual life on-campus. Undergraduate applicants will be notified of admission decisions and waitlist invitations beginning mid-February, with the majority beginning mid-March. Admitted first-year students have until May 1 to indicate their intent to enroll and transfers have until June 1.

In 2018–19, UC Santa Cruz fulfilled a state requirement to enroll one California transfer student for every two first-year students from the state. The campus’s exceptional efforts to attract transfer students led to a transfer pool with 10,138 California students, a 15 percent increase from 2017, yet similar to 2018. In total, the campus received 11,729 transfer applications.

“It’s exciting to see the strong pool again of transfer applications,” said Vice Provost and Dean of Undergraduate Education Richard Hughey. “Our admissions office has been working up and down the state, with students and community college advisors, to ensure potential transfer students to are aware of the welcoming opportunities and distinct learning environment available at UC Santa Cruz through its majors, colleges, research opportunities, and student programs.”

California high school graduates are projected to declined from 435,000 in 2018 to 431,000 in 2019, according to the Western Interstate Commission for Higher Education (WICHE).

The campus’s blend of high-impact research with tight-knit communities of learning—the 10 residential colleges—continues to be attractive for students from other states and countries.

U.S. News and World Report ranked UC Santa Cruz at No. 26 in a list of best universities for undergraduate teaching. The magazine also put the campus among the top 30 public universities in the nation.

Undergraduate students who arrive in the fall will be part of the campus’s residential college communities for living and learning, as well as host of special programs, including the Scholars Program, Smith Society, and ever expanding opportunities for undergraduate research, internships, and creative projects with world-class faculty.