Kwesi Jones '21: An artist of all media - EduBlog.News

Kwesi Jones '21: An artist of all media

Kwesi Jones ’21: An artist of all media

The Atlanta native’s latest work showcases the history of black studies at Brandeis through film. 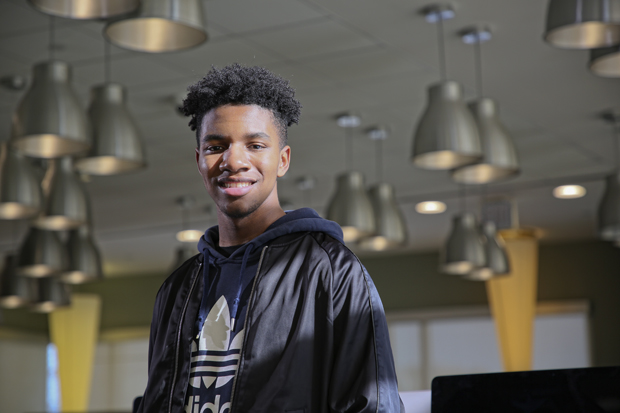 Kwesi Jones ’21 says every adult has an inner child that needs attention.

He arrived at that belief thanks to Pablo Picasso, whose paintings were once viewed as primitive and childlike because of their striking mix of geometric patterns and bold primary colors.

“I’m butchering his actual quote, but Picasso said it,” explained Jones, who, like the late 19th century Spanish painter is an artist in every sense of word.

“Every person is an artist, even if they feel removed from artistic skills,” he added. “I believe all people are creative. My life path has really been to hone in on the creative aspect in myself. I’m in constant conversation with my inner child.”

That point of view certainly explains how Jones maintains an impressive creative output on campus. The Atlanta native says he draws and paints; writes poems and slam poems; acts in an improv group; watches and criticizes all genres of cinema and television; and even emcees student events at Brandeis.

“Being able to see stories about different people has a unique psychological impact on the viewer,” he said. “With film, you put yourself in it.”

Jones, a AAAS major, feels double the affinity for this particular project, which he describes as a correlation between Brandeis’ past and present.

“This video will really show the lineage of blacks at Brandeis through time,” explained Jones. “It’s about then and now, about what the products of the past have reaped today.”

Many alumni who took part in the occupation will return to campus for the commemoration and to share their experience with black studies and black culture as part of the anniversary. The event will also feature keynote remarks from Angela Y. Davis ’65, Julieanna Richardson ’76, H’16 and Hortense Spillers, PhD’74.

“The commemoration shows you how close the distant past really is,” Jones said. “We still have people alive today who were there when Ford Hall first happened. It shows how recent these protests and calls to action were.”

AAAS and film hold a unique place in Jones’ life at Brandeis, though both areas of study became of interest to him while growing up in Atlanta. Jones credits his parents for encouraging him to pursue art and learn more about his roots.

At Brandeis, he’s taken his passions one step further. Now Jones is looking forward to leaving his mark on campus as the university commemorates 50 years of black studies.

“When you know who you are within history, you can move in the world differently and with more confidence,” said Jones. “For most of the people I grew up with in Atlanta, the experience of being African American is being divorced from a motherland – it’s hard to go back and trace.”

“You know you’re black in an African American sense, but at Brandeis you learn what black means all over the globe. There are so many facets to the African diaspora. People across the world have very different experiences. That’s what I’ve really become aware of at Brandeis.”