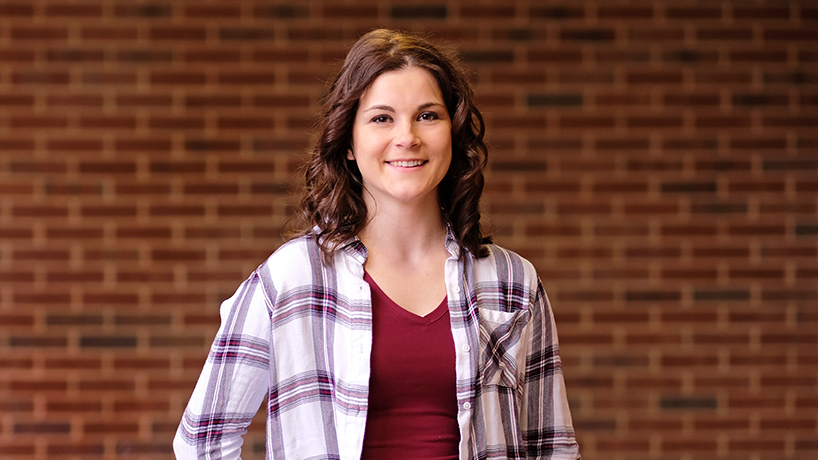 If you were looking for toddler Ashley Newton, you could find her riding shotgun in a booster seat in her father’s 1999 Isuzu tow truck.

A few years down the line, she’d still be there, cracking jokes about how the truck’s checkerboard interior fabric matched that of their 1992 hatchback Ford escort, or hanging out at her family’s service station. Or perhaps she’d be around her dad’s classic truck, a 1972 Chevrolet Cheyenne, or his muscle car.

After all that, you won’t be surprised to hear that the University of Missouri–St. Louis/Washington University Joint Undergraduate Engineering Program senior developed a strong appreciation for and knowledge about aged automobiles.

It started as something the mechanical engineering student could do with her high school friends. During the school year, they’d search for old-school cars and spend the winter knocking out glass, stripping excess weight and welding on reinforced bumpers and internal cages to keep the driver safe.

Then they ran their souped-up creations in the demolition derby.

Listen to Ashley Newton discuss her demolition derby experience and how that relates to engineering and design. (Photo courtesy of Ashley Newton)

“It was a challenge just because I am small, and I kind of do get tossed around in the arena, but I think it’s fun,” Newton said. “I love not only designing but I think building. Not only because it is challenging but you learn how something breaks down and how to make it better when it does break. It’s something you can relate to as an engineering student. It’s like, ‘Hey, what do we need to do to get to that next step?’”

During her last run, three years ago, in an indoor arena in Du Quoin, Illinois, Newton was pleased to spot a few other female drivers, a rarity in the traditionally male-dominated sport. Between her passion for cars and her interest in engineering, Newton has often been one of the few women in whatever room she’s in – and she’s not simply present there but dominant.

This all started early for Newton, who often jokes about “succeeding in a man’s world” with her father. A modern-day tomboy, she’d come home with grease and grass stains on her dresses.

The mechanical knowledge Newton garnered from working on cars naturally led to 2-D and 3-D drafting courses during her sophomore year of high school. Though initially nervous about being one of the only female students in those classes, Newton flourished. As she approached college, Newton knew she wanted to study a science, technology, engineering and mathematics field and started exploring her options.

However, her path was about to take an unanticipated turn.

At 4 feet 10 inches, Newton was an enthusiastic hurdler on her high school track team.

“If you’d asked my dad, I probably had a better chance of being on the football team than I would running hurdles, but I was determined,” she said. “I saw it as a challenge, as I see most things in my life. I loved it.”

Running in a meet over Easter weekend of her junior year, Newton landed badly but, unwilling to let down her coach, taped her foot and kept competing. At the end of the day, she had torn a posterior tendon and split two nerves in her second and third toes. Her first corrective surgery didn’t take, and she had a second after graduating a semester early senior year.

From that, she developed a severe staph infection and went on to have seven more surgeries in the span of six months. Her doctors eventually installed on her body a permanent IV line and a wound VAC, which Newton was interested to discover was based on leach therapy.

“They didn’t know if I would be able to keep my toes or my foot,” Newton said. “I was kind of a walking hospital room, but I still had my freedom, and I think I still had my feet, so I looked for something that I could conquer. As odd as it sounds, it’s almost like the best thing that has happened to me because it gave me a push not only for my degree, but it also gave me the respect of modern medicine from a totally different standpoint.”

As she recuperated, Newton pondered designing prosthetics, took some online classes and further explored school choices, discovering UMSL and joint engineering in that process. She thought it was a perfect fit and was drawn to the small class sizes and evening courses that would allow her to work daytimes.

Which she’s done for the past five years at All Points Transport, an intermodal trucking company, working everything from dispatching to payroll. Newton was also among a handful selected for the Regional Business Council mentorship program. The RBC paired her with Elantas research and development chemist Cynthia Chapple.

Newton was struck by both the difference and similarities in the ways in which she, an engineer, and Chapple, a chemist, approach materials science. It’s broadened Newton’s mind about career possibilities, and she’s added research and development to a list of interests that includes sustainable HVAC systems at a company like Ameren or Spire, prosthetic design with a STEM charity such as the Wounded Warrior Project or medical school.

“It was challenging but definitely rewarding to be able to put something in perspective for someone else,” Newton explained. “When you’re actually able to answer students’ questions, it’s a sense of relief, ‘Oh, hey maybe something did finally click or my degree is actually paying off.’ For me as an engineer, knowing the materials and how they work or how I could use them to my advantage is something that’s really fascinating.”

As if school, work and menteeship wasn’t enough, Newton is also a recent mother. After finding out she was expecting, she pondered taking a semester off and consulted joint engineering Program Director Mark Jakiela for his opinion.

“He looked at me, and I remember him telling me that there was something that I could give myself that nobody else could give me, and that was my degree,” she said. “Yes, my world was becoming very complex, but it was also a time for me to be able to chase that dream and do something for myself.”

Newton gave birth over spring break last year – “thankfully, my son decided to cooperate” ­– and went straight back to excelling at school and work. Though the joint engineering program has expanded Newton’s world far beyond cars and demolition derby, she gave her son Brantley the middle name of her favorite classic Chevrolet – Chevelle.

She’s already imagining where you might find them in a few years.

Anything you guessed is probably right.