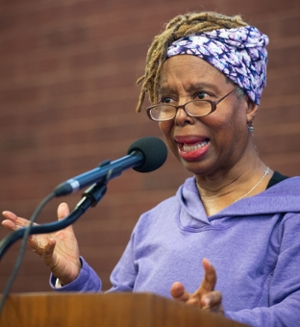 Colorism: It is as old as colonialism, pervasive as racism and remains in effect today. The benefits and consequences of “passing as white” were illustrated and discussed during the closing of Southern Illinois University Edwardsville’s Dr. Martin Luther King Jr. Week.

“I was gifted with this story,” said Medley, a New York playwright. “A friend of mine told me about his aunt who broke off from her family after she was mistaken for a white woman while traveling.”

Medley’s play is about “Zena,” who is unexpectedly offered a seat in the white section when she is traveling on a train in 1947 in Detroit. Zena leaves her first husband, a dark-skinned black man who is an alcoholic, to start a new life. 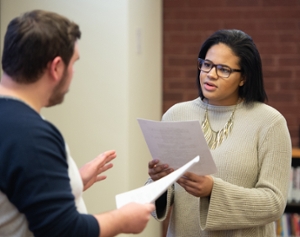 Zena marries a white man, who is an auto parts sales representative. When the couple attend an auto show at a Detroit hotel, the pregnant Zena sees her first husband, who is now a janitor at the hotel. After 10 years, Zena and her first husband are the only two people in the ballroom who know her secret.

“In the play, Zena says that no one can judge her, when they don’t know the racism and hardships she has had to face,” said Medley. “Being light-skinned or ‘yellow’ also comes with hatred and taunting.”

“The message of colorism is still with us,” she continues. “It saturates everything. The most appealing women are blonde, blue-eyed, and those who can get as close to that are also favored.”

“Cassandra is a talented playwright, and I was grateful she came to campus,” said Kathryn Bentley, director of the SIUE Black Studies program and associate professor in the Department of Theater and Dance.

“Many of our students are not aware of the depth of oppression that African Americans faced because of how dark or light they were, and how colorism actually tore families apart,” said Bentley. “Cassandra Medley’s play beautifully illustrates this issue, and gives us an opportunity to talk about something that is still prevalent in our communities.”

“We were fortunate to have been able to bring Cassandra to campus this semester,” continued Bentley. “She worked intensely with theater students to create an original play on immigration, ‘The War Within.’”

“The War Within” along with Medley’s one-act plays, “Daughter” and “Son” will be performed April 9-16 at SIUE’s Metcalf Theatre.

“During our session, we also talked about ‘passing’ among other groups,” said Medley. “Colorism exists for other ethnic groups such as Indians and Hispanics. Lighter-skinned people in these groups enjoy better advantages and opportunities. Then there are those who ‘pass’ in other ways, such as being heterosexual.”

Medley, originally from Detroit, has written more than 20 plays. She began writing in 1977. She wrote “Noon Day Sun” in approximately 2002, and it was presented on New York Off-Broadway in 2006.