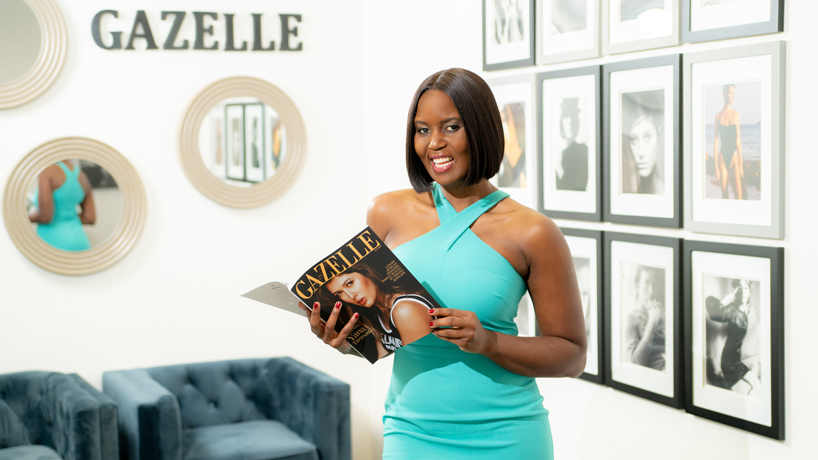 Seated inside her Maryland Heights office, Cillah Hall lets out a bellowing laugh as she describes the type of student she was 16 years ago.

She was a fiery scholar who challenged professors when she held an opposing viewpoint. She was a night owl who arranged her course schedule according to her terms, vowing not to take morning classes. And she was an aspiring journalist occasionally accused of being nosy.

But as the University of Missouri–St. Louis alumna sits in an executive chair at Gazelle Magazine headquarters, she realizes these qualities have helped her chart a career path tailored to her lifestyle and ambitions.

“I was a passionate student and had this fire in me,” said Hall, who earned a BA in communication in 2003. “Now every day when I get up, I’m running. If I’m not solving something, I am creating something or going somewhere. That’s just my daily life of trying to make it as a woman, to be taken seriously. I’ve fought really hard to be taken seriously. I do the work, and I make connections. I look at the mistakes I’ve made, and I take opportunities. It’s very challenging, so it definitely feels like I’m a gazelle being chased by lions all the time.”

This feeling, which is influenced by an African proverb, is also the inspiration behind Gazelle Magazine, her women’s fashion and lifestyle publication. Hall, who serves as the publisher and fashion editor, established the regionally based magazine in 2014 with the goal of bringing a cosmopolitan and positive influence to the St. Louis area.

“I felt like there was something missing in St. Louis,” she said. “I am from overseas, and I travel a lot to New York, LA and Miami. I felt like we were a little bit behind those cities. So Gazelle is a destination for women like myself who are excited about growth, who are aspirational, who are leaders and influencers.”

Hall and her team of 20 editors, writers, photographers and videographers publish the magazine on a monthly basis and contribute daily to the company’s growing online presence. Gazelle prints about 20,000 copies each month, which are distributed to homes and businesses by mail and are available on racks at select Schnucks and Dierbergs stores across the region.

Inside the 100-page magazine, readers find high-end fashion content – from design houses like Dior and Chloé – coverage of local galas and parties as well as profiles on influential leaders.

To celebrate its fifth anniversary in 2019, the Gazelle staff introduced a redesign in its January edition and pledged to tell more stories about issues affecting women and the St. Louis community.

“We are definitely making a huge push to start talking about real issues going on socially, politically, culturally because it’s a time when everybody has to do their part,” Hall said. “We can no longer ignore the bigger issues in our community. But we want to tell those stories in a way that empowers, not diminishes, what we have accomplished as women.”

Hall, who has a penchant for taking risks and testing limits, is the force behind Gazelle’s new direction. Throughout her career and much of her personal life, she’s considered herself a storyteller with a passion for writing and desire to empower others.

“I have a strong curiosity about people and their lives,” she said. “It comes from a really genuine place. I’m interested in and excited to hear about other people. I’ve always had that in me.

“In my own life, I am an open book. I love authenticity. You can’t be authentic if you aren’t telling your own truth, your own story. For me, a career in media was a calling. It’s something I’m passionate about, and I feel like I’m making an impact.”

Time at UMSL helped her focus this passion.

Before enrolling at the university in the late 1990s, Hall modeled and held a variety of other jobs, but she lacked a clear career focus. Her life was far from the picture she imagined when emigrating from Zambia to the U.S. at age 19. She felt a sense of limbo, wanting to develop a meaningful career but lacking the experience and degree to do it.

“I knew that I was destined for better things before enrolling in college. It was just a matter of finding a school that would fit my lifestyle,” Hall said. “My home life was busy with my new husband and daughter, and I had two jobs. UMSL was a place that felt right for me. When I was there, I felt like I was leading the life that I was going to live once I left campus.”

In four years’ time, Hall graduated with honors from UMSL and earned a job as a production assistant at KSDK (Channel 5). After a few years with the local NBC affiliate, she moved on to an organization in Springfield, Missouri, and then to KPLR (Channel 11). She eventually found herself back at KSDK, where she served as the morning news producer for three years.

She loved the work and made many meaningful connections in the role, but her hectic schedule did not provide the work-life balance she desired. Hall eventually resigned, giving way to her entrepreneurial ambitions.

She then opened Xanadau Public Relations, which mostly serviced clients in the entertainment industry. Xanadau represented musicians such as Murphy Lee and Nelly and organizations such as the Pujols Family Foundation and Mercy health system.

As she worked for herself, Hall became inspired to pursue other passions, including co-founding Missouri Style Week and publishing Gazelle.

“Graduating from UMSL and then getting a job at Channel 5 three weeks later is really how my life started,” Hall said. “Serendipity just took over, and I feel like I was led in the direction that I was meant to go.”

Now, five years into her publishing role, she’s eager to expand Gazelle and continue to outrun the metaphorical lions in her life.

“Every part of being in the U.S. has been a challenge of growth, major life tests, testing my ability to persevere,” Hall said. “There have been a lot of challenges, but they are mixed in with a lot of amazing moments of triumph. Truly, when you do the work and you’re consistent with it, you see the results in America.”