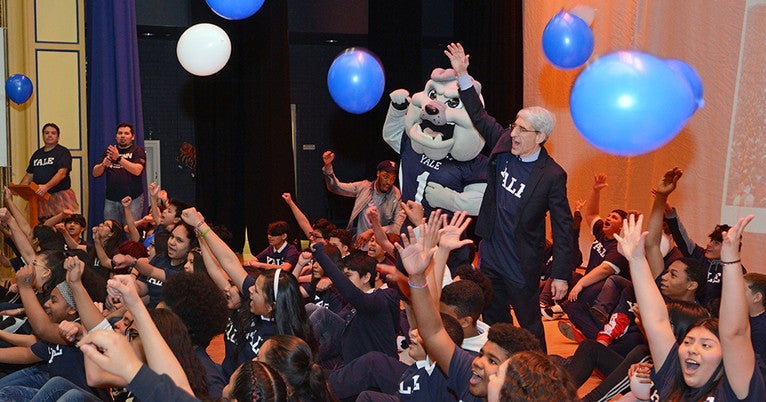 Snowball, the school’s annual winter assembly, brings together all of Fair Haven’s students and their parents for a morning of song and dance that celebrates physical fitness as well as affordable college access via the New Haven Promise scholarship program. Founded in 2010, the New Haven Promise scholarships funded by Yale help eligible students cover the full tuition for in-state public colleges. Yale provides up to $4 million per year every year for city residents who graduate from a New Haven public school and attend college in Connecticut.

“From the moment we arrive in late August, early September, we’re all looking forward to Snowball,” said Heriberto Cordero, principal of Fair Haven School. The purpose of the assembly is to “plant the seed” about the possibility of attending college with very young students and “watch it grow” as they get closer to high school age, explained Cordero.

“We now have Promise college students who participated in Snowball in their youth,” said Patricia Melton ’83, president of New Haven Promise, at this year’s Snowball. “It has helped, particularly the immigrant students and families, understand the opportunity that is before them.”

“It was wonderful to join fellow educators deeply committed to serving our home state at the 2019 Snowball,” said Salovey. “The bright young people of New Haven are integral to the continued growth of our city, and it was thrilling to share with them the exciting opportunities offered by higher education and to tell them about the Yale-supported New Haven Promise scholarship.”

The 2019 Snowball began with remarks from Congresswoman Rosa DeLauro and New Haven Public Schools Superintendent Carol Birks, who spoke from their personal experiences about the transformative power of a college education and encouraged Fair Haven students to chase that dream for themselves. After the speeches, students were called up to the stage in grade order to perform dance routines and fight songs from Connecticut colleges or universities.

Between musical numbers, teachers at the mic took turns quizzing the students in the audience about the eligibility requirements for the Promise scholarship: being a New Haven resident and attending New Haven Public Schools (or approved public charter schools), having a positive disciplinary record, achieving 90% attendance in high school, completing the community service requirement, and maintaining a B-average (3.0) or better throughout high school.

“Because of Promise, I’ve been keeping my straight As and trying to keep my high honors, so I can actually get to college for free,” said Fair Haven seventh-grader Elisha Correa, who’s been attending Fair Haven School and the annual Snowball since second grade. (Watch her in this video, getting excited about the 7th annual Snowball.)

During their routines, led by Fair Haven’s physical education teachers, students wore the colors of a Connecticut college or university as they performed a choreographed group dance and sang that school’s fight song. Each grade level represents the same college or university each year, so by the time students graduate from Fair Haven School, they’ll have learned about the 10 schools represented at Snowball, from Gateway Community College in pre-K to Yale University in eighth grade.

This year, six of the classes had a special guest star come up to dance with them: the president of the college or university they were representing. When eighth grade, clad in blue Yale t-shirts, took the stage, Salovey, Chun, and Yale’s costumed mascot, Boola, joined them for a lively rendition of the popular country line-dance “Cotton Eye Joe.”

“The universities throughout the state have long participated by providing t-shirts, cheerleaders, and mascots, but to have so many college presidents on the stage this year was definitely new and exciting,” said Melton.