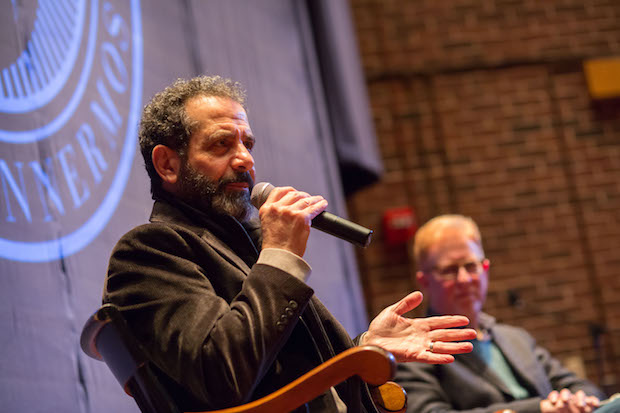 Actor Tony Shalhoub visited the Brandeis campus Sunday where he met with students and participated in a Q-and-A session.

Shalhoub’s performances for television, film and the stage have earned him Emmy, Grammy and Tony awards, and recently a Screen Actors Guild Award for his role in the Amazon Video series “The Marvelous Mrs. Maisel.” He implored students to hone their skills by performing in all three performance mediums.

“I would encourage young people to do theater because there is nothing like it as a training ground and an opportunity to take bigger risk and expand your range, but to also work in film and television, even if it is their own projects,” he said. “Now, everybody can do that. That wasn’t the case when I was coming up.” 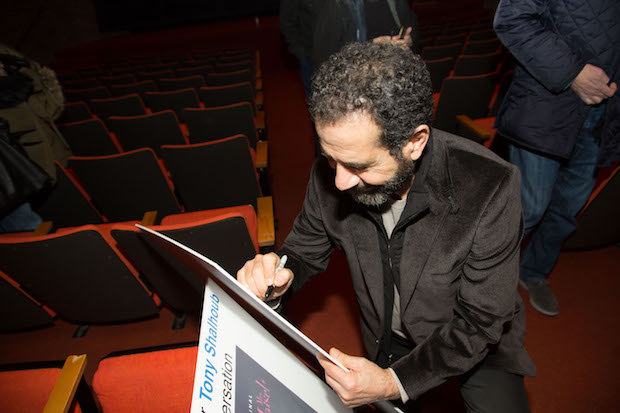 Shalhoub was interviewed by Graduate School of Arts and Sciences Dean Eric Chasalow and then took questions from the capacity crowd during the hour-long event at the Wasserman Cinematheque. He reflected on how his work on television series like “Wings,” “Monk,” and now “The Marvelous Mrs. Maisel” have made him a familiar face across America.

He said the relationship of the cast and crew on “Mrs. Maisel” is unlike anything he’s experienced before.

“There’s a connection on Maisel that’s kind of different. It is so cohesive,” he said. “There is a real exhilarating feeling when we are all together, on screen and off screen, that’s at a level I’ve never experienced before.”

He named three roles he would like to do some time in the future: King Lear, the father in the Harold Pinter play “The Homecoming,” and some kind of a World War II film.

“My real dream is to play a role I haven’t even imagined yet, that something will come along that I would be unlikely to play,” he said. “Maybe someone is writing something out there right now that’s unknown.”

The visit to campus was sponsored and organized by the Film, Television and Interactive Media program.