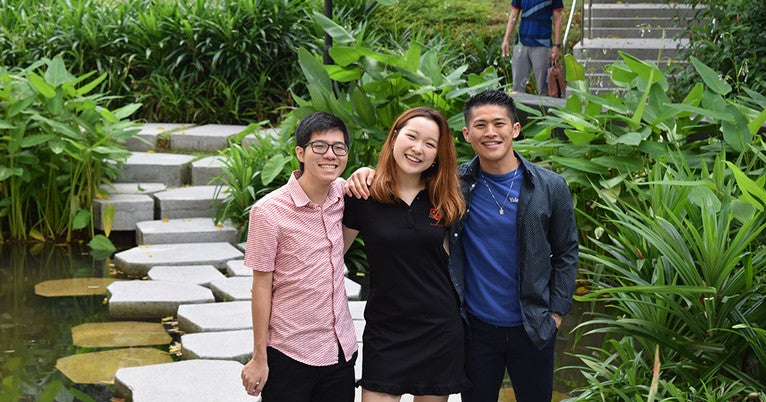 For the first time since the founding of Yale-NUS in 2011, three Yale undergraduates are living and studying in Singapore as part of a semester-long exchange.

As the partnership between Yale and Yale-NUS matures, Yale students have grown more aware of the many opportunities offered at and through Yale-NUS.

“The fact that we have been sending increased numbers of Yale-NUS students to Yale for semester study abroad means we have more ambassadors talking about how amazing Yale-NUS is. Yale students are intrigued,” said Trisha Craig ’93 Ph.D, dean of international and professional experience at Yale-NUS.

“More and more, Yale students understand that Yale-NUS represents a resource for them, and that Singapore is a great place. It’s an extremely modern city-state and a gateway to Southeast and East Asia, one of the most dynamic regions in the world,” said Craig.

Nguyen ’20 studies economics at Yale and decided that Singapore was the perfect place to go to expand his education.

“Many of my professors and many prominent Yale alums have emphasized in class and through their work how important Asia will be in the future global economy. I felt the need to experience their views myself through a semester in Asia at Yale-NUS,” he said.

Nguyen believes that while Yale and Yale-NUS have similar facilities and resources, the students at the two schools are very different.

“The most noticeable difference is how globally-minded Yale-NUS and its students are in terms of experiences, interests, and career goals. Dining hall conversations and seminar discussions tend to be less about America and more about international events and issues,” he said. “I assumed Yale-NUS would simply be a Yale in Asia, but I quickly noticed that it wasn’t. It is a totally different college with its own types of traditions, customs, autonomy, and people. It has been a whole new undergraduate college experience for me.”

While in Singapore, Nguyen wants to visit the Singapore Sembawang Naval Base, where American troops are stationed. He is also looking forward to the Chinese New Year.

Tanaka ’20 is pursuing a degree in linguistics and East Asian studies. To him, he said, Yale-NUS seemed like a natural option for a study abroad experience because of the institutional connection to Yale.

“On the one hand, I could count on many of the same Yale community spaces and support structures, like residential colleges and equivalents to deans and heads of college. I like that the social and community spaces around campus help to open up conversations and allow me to make new friends just like at Yale. The butteries at Yale-NUS also have mahjong, which is a big plus. On the other hand, in Singapore I also have the opportunity to experience very different cultures from what I experience at Yale and in the United States,” he said.

Although Tanaka is still adjusting to the more intimate community at Yale-NUS, he said he loves the opportunity to explore places off campus and around the city.

“The mix of cultures, the city landscape and green spaces, and the people of Singapore are completely different from anywhere I have ever been, so I am looking forward to exploring and gaining a better understanding of this place. Also, I hope to explore more hawker centers and eat great food!” he said.

Shen ’20 also majors in East Asian studies. Her interest in Yale-NUS combines Nguyen’s desire to explore an important and emerging world power with Tanaka’s appreciation for the familiarity of the Singapore institution.

“I am considering career prospects within Asia after graduation, and Singapore seemed to be the perfect spot since it’s a major Asian business hub. Yale-NUS is the only residential liberal arts college in Singapore so I imagined it would be a lot easier to adjust to compared to other institutions,” she said.

The wealth of academic opportunities also drew her to Yale-NUS.

“I felt that I had already explored most of the course options of my interest at Yale, and I knew that studying at Yale-NUS would offer me an excellent Asian studies program. I appreciate that the courses here give a better balance of global perspectives. I would say that many courses offered at Yale are still more Eurocentric,” she said.

“It’s also my first time meeting students from countries like Uzbekistan, Tunisia, and Ukraine, and while I’m sure there are students from these backgrounds at Yale as well, it’s much easier to meet these students here because the community is so small and intertwined,” she added.

Shen is also making an effort to integrate herself into the broader National University of Singapore (NUS) community in nonacademic ways. She kayaks with other members of the university and plans to travel extensively.

“I’m stoked for this semester, and I can’t wait to share all of my experiences and newfound perspectives and knowledge with Yalies back home,” she said.