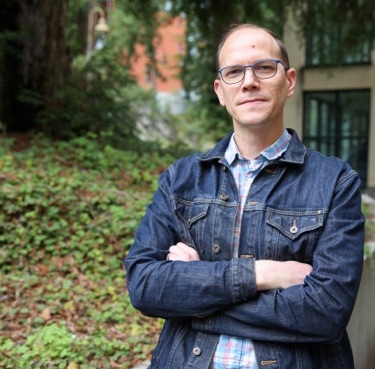 “This is a story of persistence, community, refuge, and protection away from the missions and the long, colonizing arm of the federal government,” says Assistant Professor Tsim Schneider, photographed below holding an obsidian point recovered from the site of a 19th-century Coast Miwok village. (Photos by Carolyn Lagattuta)

Contrary to the dominant narrative of cultural extinction, indigenous residents of Marin County survived colonization, preserving and passing on their traditions and cultural practices, says a UC Santa Cruz anthropologist who will present his latest research during a conference in March.

“We hear the story of loss and termination, but the Coast Miwok and other Native people survived the Mission period,” says archaeologist Tsim Schneider, an assistant professor of anthropology who has spent years recovering and analyzing artifacts from sites throughout Marin County. “This is a story of persistence, community, refuge, and protection away from the missions and the long, colonizing arm of the federal government.”

Schneider will join other researchers in a discussion of their latest findings during the annual meeting of the Society for California Archaeology, which takes place March 7-10 in Sacramento.

Most fourth-graders in California are required to study the Mission era that began in 1769 and ended in the 1830s, building models of the Catholic churches that still dot the landscape from San Diego to Sonoma. However, few residents of the San Francisco Bay Area know the tumultuous history of the Coast Miwok and Southern Pomo people.

Much of what is now Marin County, including Point Reyes and Tomales Bay, was home to multiple small-scale indigenous communities with distinct histories and identities. Schneider, a member of the Federated Indians of Graton Rancheria (the federally recognized and sovereign tribe of Coast Miwok and Southern Pomo people), collaborates with Lee Panich, associate professor of anthropology at Santa Clara University, to explore three sites in Marin County.

Schneider and Panich use ground-penetrating radar (GPR) and hand excavation to explore archaeological sites where household items and other artifacts of daily and ritual life are buried. They have recovered the remains of obsidian and chert cutting tools, animal remains (shell and fish bones, bones of domestic pigs), as well as charred plant remains, all of which offer clues to the persistence of residents and the transformation of their diets and lifestyles. Evidence of stone-tool making, fishing and shellfish gathering, and ceremonies reveal a “pattern of activity taking place outside the missions” that counters the familiar story that Native peoples were entirely confined to colonial missions or, later in time, the reservations and rancherias established by the United States Government.

Indigenous communities in the early 1800s

There certainly was significant forced and voluntary relocation of Native residents from Marin County to San Francisco’s Mission Dolores, which was established in 1776, but the mission was not walled off: Written accounts attest to life beyond the mission grounds and the persistence of assorted life-affirming practices for Native peoples, including hunting and gathering, mortuary rites, child birth, night dances, and other indigenous practices, said Schneider.

“Native people were still engaging with their world,” he said. “They were staying mobile and connected to their landscapes.”

Schneider sees the continuation of these practices during the mission era as the foundation for the enduring resilience of Coast Miwok communities that followed. For instance, Schneider and Panich are analyzing remains from a mid-1800s community at Toms Point on Tomales Bay. On that site, 3,000-year-old Coast Miwok villages became a thriving trading post in the mid-19th century after a Boston sailor named George Thomas Wood jumped ship.

“We see evidence that they applied traditional skills to imported materials,” said Schneider.

“We can use archaeology to show motion, dynamism, and engagement with the landscape,” he said, adding that Native residents were “relatively untouched” until the early 1800s, when Franciscan missionaries responded to the establishment of Fort Ross, a mercantile colony of the Russian-American Company, by constructing Mission San Rafael on Coast Miwok land.

By the 1840s, the trading post at Toms Point was thriving, with Native labor powering the hide and tallow business. Founder George Wood married a Coast Miwok woman from Tomales Bay; the story of intermarriage among Coast Miwok and Europeans in the region becomes personal for Schneider, who traces his ancestry to a similar relationship formed in 1840s Bodega Bay.

Today, Toms Point is privately owned. Schneider conducts his archaeological work in consultation with the land owner and Graton Rancheria. The Graton Rancheria, a patch of marginal land west of Petaluma, was designated tribal land by the federal government in 1920; it was terminated by Congress in 1958, and restored in 2000 by President Bill Clinton.

Schneider collaborates closely with Graton Rancheria’s Sacred Sites Protection Committee and its tribal historic preservation office. In 2016, he led a group of advanced undergraduates and graduate students from UC Santa Cruz on a four-week field expedition that focused on three sites: the trading post and two additional sites with dates of occupation extending to at least 4,000 years ago.

This detailed work follows a survey conducted by UC Berkeley anthropologists in the early 1900s—a time Schneider refers to as a “darker era” when archaeologists mapping sites around the San Francisco Bay regularly excavated Native American graves with no consultation or regard for tribal customs.

Schneider has also led field trips and workshops with members of the Coast Miwok tribal community—children, as well as adults and elders—many of whom now live in the Central Valley and beyond. “Because of great distances and the high price of living in coastal California, not many tribal members get to visit the places where their ancestors were living and working,” he said. “It’s been 150 years since the Coast Miwok people were on Toms Point, but they were here for 13 millennia and counting. It’s important to respect the tribe and the cultural trauma they experienced by the long arm of colonialism.”

Schneider is gratified to see evidence of “the capacity of Native people to make the best of awful conditions, using their traditions in ways to help them thrive.”