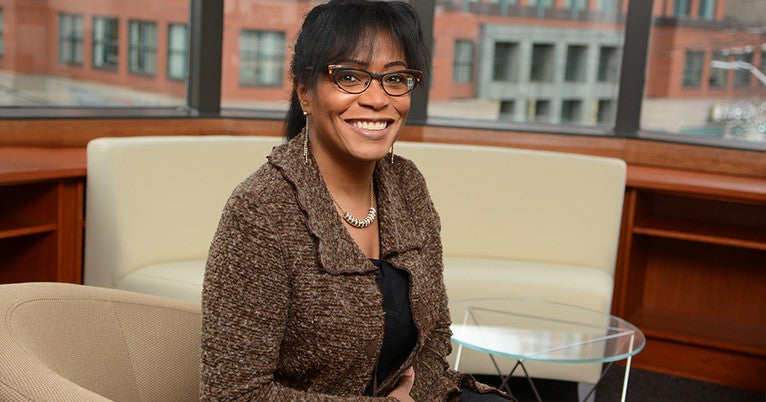 When Patricia Melton ’83 B.A. first came to Yale in 1977, she was just trying to survive. She’d grown up in Cleveland as one of seven kids, and her mother passed away following a serious car accident when Melton was just 12. Through a program called A Better Chance, Melton was accepted into Middlesex School in Concord, Massachusetts, a private boarding school where she became a standout lacrosse and field hockey player. But by the time she turned 14, Melton had to support herself. Though she was accepted into Yale, the first in her family to attend college, she arrived several days late because she was at first unable to come up with the money for transportation to campus.

“It didn’t dawn on me to call the coach,” Melton says. “First-generation students were so under the radar then, no one talked about our unique challenges.”

Throughout her undergraduate years, Melton had to juggle financial responsibilities with school and athletics, and was dealt a devastating blow when she lost a brother to gun violence in 1980. Though she was officially a member of Pierson College, Melton lived and worked off-campus for two years to cut back on costs, and stopped buying books after freshman year. She also switched athletic gears, taking up track and field and becoming one of Yale’s most celebrated athletes. She won two Most Outstanding Athlete titles and a second-place national title in hurdles. Her times qualified her to be a finalist at the 1988 Olympic Trials in the 800-meter run.

After graduation, Melton was often called back to Yale to speak to student-athletes, and Senior Associate Athletic Director Barbara Chesler remained a constant presence. “Barbara is a huge advocate of athletes,” Melton says. “And she’s created an amazing community of women athletes.”

Melton pursued a career as an educational consultant and an assistant dean at Vincennes University in Indiana, but says she felt a calling to return to the east coast and reimagine her Yale experience. “It was so difficult,” says Melton of her undergraduate years. “I was very shy, I lost my brother, I don’t know how I made it through. But I had this relationship through alumni and athletics — this was my Yale family.”

In 2012, Melton learned that New Haven Promise was looking for an executive director and submitted her resume with Chesler’s support. She got the job, and a nearby apartment, and was soon overseeing one of the city’s — and Yale’s — big success stories and growing it into its full potential.

“Coming back at the top of my career and being able to work with my alma mater — it has far exceeded my expectations,” she says.

Melton was quick to embrace her new home city. “New Haven is the type of place where you feel like you can make a difference,” she says. And she could see herself in the faces of the first-generation high school students that New Haven Promise supports. With funding primarily from Yale, the Community Foundation of Greater New Haven, and Yale New Haven Hospital, New Haven Promise provides incentive-based tuition scholarships to any qualifying high school students in the city to attend more than two dozen two-year or four-year in-state colleges. Forty students from the program have been admitted to Yale. The organization also provides mentoring and paid internships to participating students, and support for graduates to find careers in New Haven.

New Haven is the type of place where you feel like you can make a difference.

Since New Haven Promise began, the city’s public-school enrollment has increased by 17%, a 50-year enrollment high, and it now has the highest graduation rates (80%) from Black and Hispanic students among Connecticut cities. Since the program’s inception, 1,591 Promise Scholars have shared more than $12.7 million in college funding. In addition, over 170 students have been placed with paid internships at 60 agencies in the past year, 95 of them at Yale.

“The thing I’m most proud of is that my alma mater is the only college in the country funding a Promise program for the entire city,” Melton says.

She’s also able to enjoy being part of the Yale community in a way she couldn’t as an undergraduate. She’s now a fellow at Pierson, her residential college, and sits on the Yale Alumni Association Board of Governors. She works closely with Yale President Peter Salovey, chair of New Haven Promise’s board of directors.

Melton is energized every day by what New Haven Promise students have accomplished and what’s to come. She’s says she’s ready to find out what it looks like “when an entire city embraces its students — to, through, and after college.”