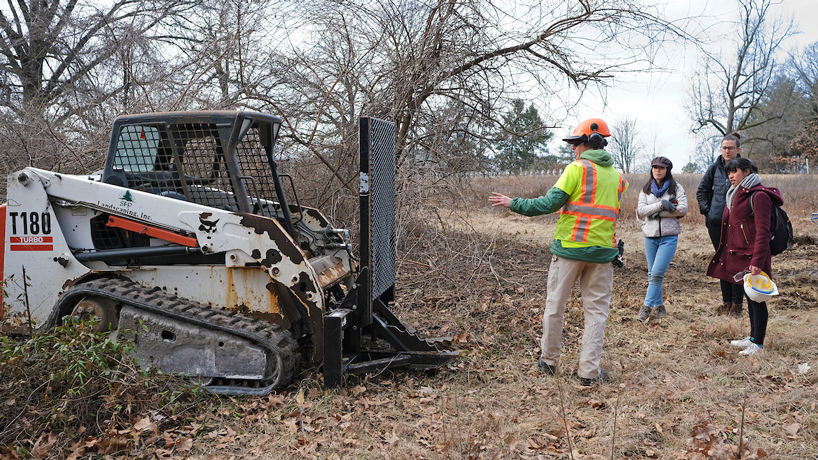 Local contractor Native Landscape Solutions has been helping in those efforts, which were made possible through a $30,000 grant from the Missouri Department of Conservation’s Community Conservation Grant Program.

The NLS team has been removing Amur and Japanese honeysuckle from four acres of North Campus, just west of West Drive, that borders the Audubon Bird Sanctuary. It recently began similar work on three acres of South Campus near the Campus Honors Environmental Research Project site.

UMSL Grounds Supervisor Gregory Ward, who secured the grant with assistance from CHERP Director Jay Fish, wants to make sure the work doesn’t go unnoticed, not only on campus but in the wider community. Last week, he organized a demonstration day and workshop at the South Campus location. 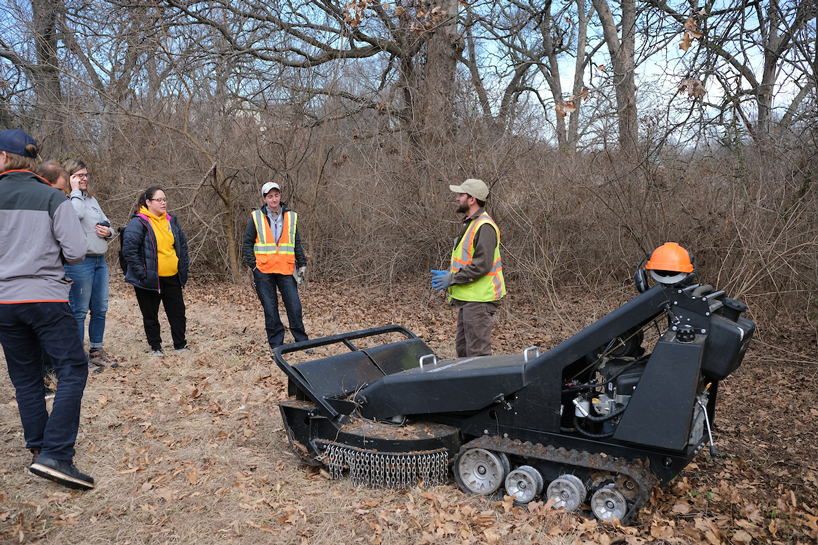 Chris Feldewerth (at right) of Native Landscape Solutions discusses the uses for the Peco Brush Blazer during last week’s workshop.

“This is our moon walk,” Ward said. “That’s how I view it. That’s how I believe campus should view this. We want to have exposure. We’ve never truly tackled our natural areas to this extent. This is an ongoing process, and this is just the beginning.”

The event attracted students, current and former faculty members, staffers and community members from such organizations as Great Rivers Greenway, the Missouri Botanical Garden, the Missouri Department of Conservation and the Missouri Prairie Foundation’s Grow Native program to the South Campus location.

Staff from Native Landscape Solutions walked attendees through how to identify honeysuckle and other invasive species. They demonstrated how to use some basic tools to remove the problem plants. They also showed off more powerful machinery like the Peco Brush Blazer, hydraulic tree puller and forestry mulcher that can be used to clear larger areas of land more efficiently.

They also offered a lesson in the science at work that makes restoration so important.

Tom Ball, who has more than 30 years experience as an outdoor adventure and environmental educator in such programs as the Missouri Stream Team and Missouri Environmental Education Association, explained the difficulty honeysuckle creates for native plant growth. The honeysuckle produces leaves very early in the spring, giving it a competitive advantage over native plants and serves to shade out understory plants and tree seedlings. The changes to vegetation can alter the soil moisture and nutrients. The berries from the invasive plants also do not contain the same nutrients or fat content as other native berries, which can impact the birds that eat them.

Researchers have also found that removing invasive honeysuckle growing near streams can also improve diversity of insects, snails, worms and other aquatic macroinvertebrates living in the stream.

“It could be a good science study if you want to look at the effects of removing an invasive species,” Ball told graduate students Estefania Fernandez Barrancos and Amanda Wu during one of the demonstrations. “That could be like a master’s degree. You could actually get a real degree from that if you wanted to because important science is going on. That’s why we do it.” 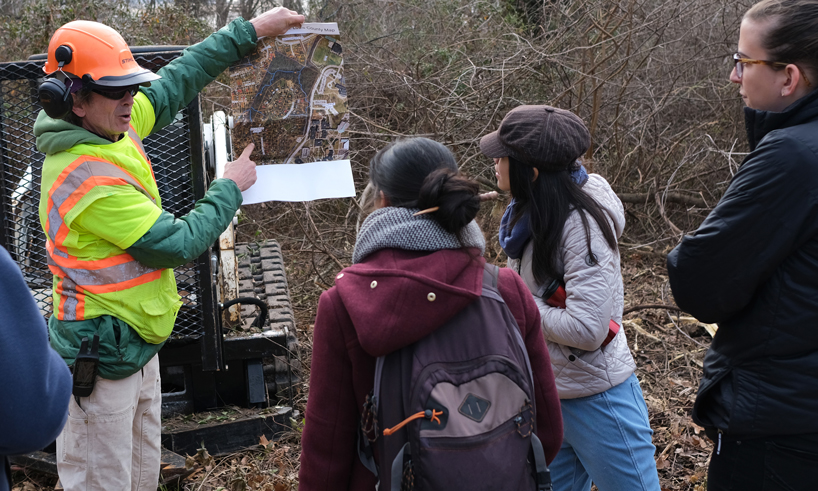 Tom Ball of Native Landscape Solutions holds a map of the UMSL campus and points out areas his team has been working to clear of invasive species.

But one didn’t have to be plotting a thesis or dissertation to find value in the workshops, as Allison Brown, the restoration outreach coordinator for the Missouri Botanical Garden, noted.

“I work with community groups and schools, businesses to give them information on how to restore their areas,” Brown said. “So I came to see if I could learn new methods that I don’t already know and see what other contractors are doing and telling other people to do.”

Ward is hopeful work being done at UMSL can inspire other groups to take action.

“We’re so visible, and it’s going to become more and more necessary that we’re at the forefront of these initiatives,” Ward said. “We want to show that we are being excellent stewards of the land that we are responsible for.

“Through MDC grants, there is money out there for public land owners to assist with projects like this and to further whatever mission they have in mind. I really feel like we could be a leader to set the example.”

He aims to apply for more funding that can be put toward removing invasive plants from other parts of UMSL’s campus in the future.