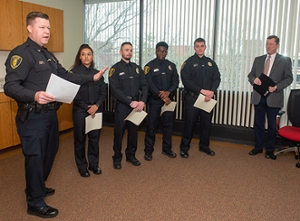 Southern Illinois University Edwardsville’s Police Department has added four officers to increase its squad to 44. All of the new officers have direct ties to either SIUE or the Metro East.

The officers were sworn in Wednesday, Feb. 20 by Vice Chancellor for Administration Rich Walker. Chief of Police Kevin Schmoll also participated in the ceremony.

“We are pleased to have these officers join a team of SIUE officers who are proud to serve,” Walker said. “We pledge to each of their families that we will do our best to provide them with the proper equipment, training and support to keep them healthy and safe as they help keep our students, employees and guests safe on all three campuses.”

The new officers are: