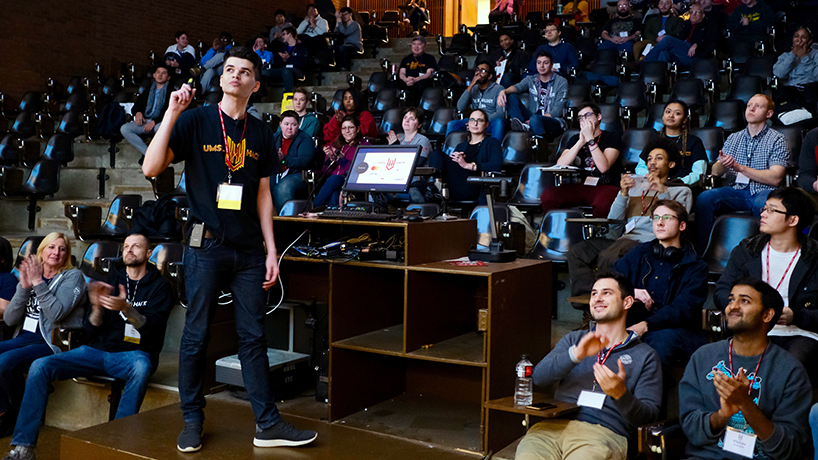 Co-founder Mohamed Langi kicked off the hackathon at the opening ceremony on Friday. (Photo by August Jennewein)

If you had strolled through Express Scripts Hall and the Social Sciences & Business Building last weekend, you’d have noticed the classrooms filled with small groups of intensely working students.

All around them were the accoutrements of their trade: notes, computers, snacks, energy drinks and sleeping bags.

For 36 hours they hunkered down for UMSL|Hack: Show Me the Data, the third annual spring semester hackathon organized through the Department of Information Systems. The event began Friday evening with the announcement of five problem statements: campus safety; increasing volunteerism in St. Louis; fighting suicide and depression; informing voters on local issues; or freestyle, in which the developers designed their own problem.

Here “hack” is used in the spirit of increasing efficiency through developing new methods or solutions rather than in the unauthorized-system-break-in sense. The word hackathon, a portmanteau of hack and marathon, reflects the intensity of the challenge. Programmers worked to develop a complete application by 2 p.m. Sunday, when judging began. 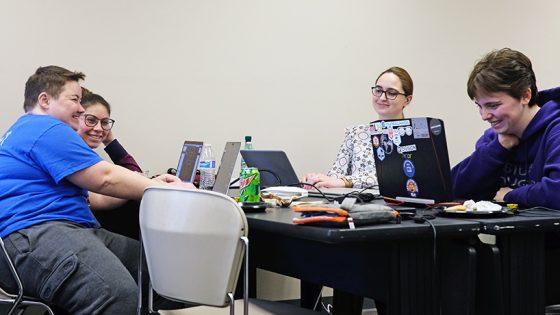 The driving force behind the event was University of Missouri–St. Louis MBA student Mohamed Langi, who co-founded UMSL|Hack while working toward his information systems BS. After participating in GlobalHack VI, Langi was inspired to create a similar program at UMSL. Since the inaugural 2017 hackathon, Langi has grown participation from 60 to 120 hackers and expanded its reach beyond UMSL to students from area high schools, Saint Louis University, Washington University in St. Louis and more.

All this was possible thanks to Langi’s hustle.

“It’s just calling people, telling them the good intentions behind UMSL|Hack and why it is good for the community,” Langi said. “It was a lot harder when we first started because nobody knew what UMSL|Hack is, and now, it’s become easier. We actually had Express Scripts reach out to us saying they wanted to be a sponsor.” 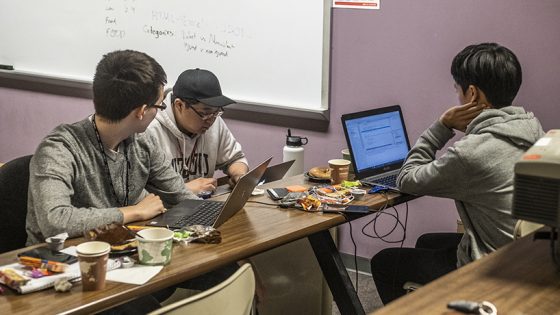 Because UMSL|Hack’s goal is education, the organizers create problem statements that are achievable for entry-level programmers. To help the student developers, Langi arranged for 30 mentors to provide guidance on Saturday and Sunday.

“We create this environment for people who have the same interest in technology to learn, to communicate, to network with each other,” Langi said. “Our whole goal is to make sure that by Sunday everybody who has participated has learned something new, whether it be meeting other people, whether it be in the technology or whether it be soft skills from communicating at the event.”

In addition to the seven meals provided, Langi arranged for breaks with stand-up comedians, midnight video game face-offs and areas with board games, TV and music.

But hackathons aren’t all fun and games, and UMSL|Hack is no exception. Participants had the option to submit resumes along with their registration, and Langi passed those along to sponsors that had contributed at the Diamond ($8,000) level. Sponsors that had contributed at the Platinum ($5,000) level or higher received a list of all participants and had the option of sending recruiters to the event itself.

“Recruiters look at a hackathon almost like internship experience because they know what it takes,” Langi said. “There are people who have gotten jobs or internships just by showing up to UMSL|Hack. It benefits almost everybody that’s involved in it. The sponsors, the staff, the volunteers, the participants and UMSL itself. These hacks have been getting a lot of traction. Almost all the big schools have a hack on campus.”