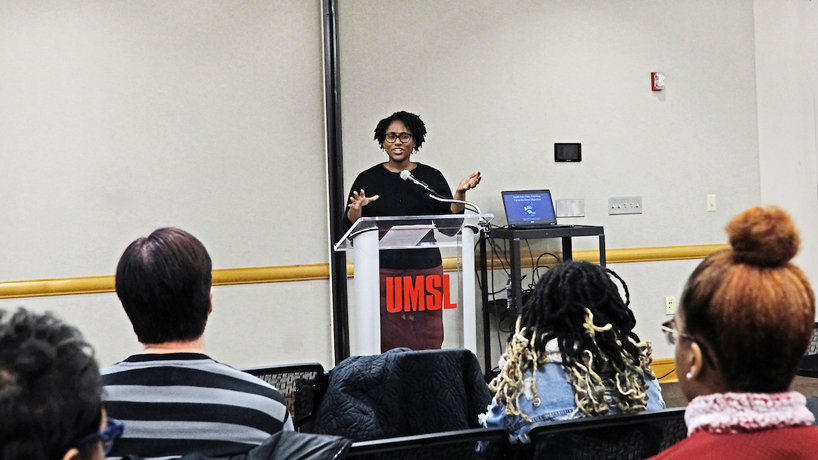 Ashlee Roberts had been planning the keynote event for the University of Missouri–St. Louis’ celebration of Black History Month and thinking about speakers who could best elaborate on the 2019 theme of “Black Migrations,” set by the Association for the Study of African American Life and History.

“Two people came to mind,” the associate director of the Office of Student Involvement told those who attended the event Wednesday night in the Century Rooms of the Millennium Student Center.

One, Roberts explained, was Isabel Wilkerson, a journalist and author of “The Warmth of Other Suns: The Epic Story of America’s Great Migration.” The other was Marcia Chatelain, an associate professor of history and African American studies at Georgetown University.

“That is our keynote speaker tonight, and I’m very excited to have her,” Roberts said as she introduced Chatelain to the small but engaged audience.

Chatelain, who received dual bachelor’s degrees in journalism and religious studies from the University of Missouri–Columbia and a PhD from Brown University, wrote a book titled “South Side Girls: Growing Up in the Great Migration.” The book examines the experiences of young women and girls who moved to Chicago from the Deep South during the mass migration of African Americans beginning around 1916 and continuing until 1970.

“We know that that migration is critical in populating what we consider black spaces today,” Chatelain said near the start of Wednesday’s presentation. “One of the things that I think is sometimes hard to capture when we think about the Great Migration is why people took such a risk to leave the Deep South.” 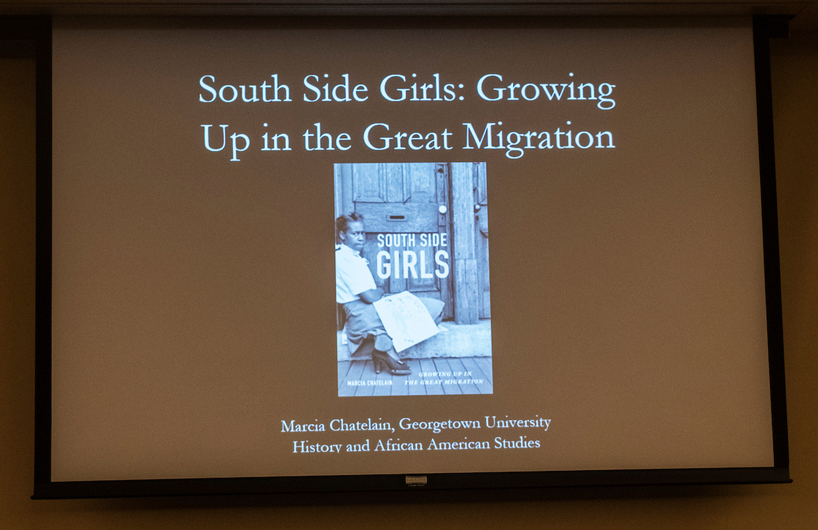 A screen in the Century Rooms of the Millennium Student Center displays the cover of Georgetown Associate Professor Marcia Chatelain’s book, “South Side Girls: Growing Up in the Great Migration.”

She reminded attendees of the reign of terror African Americans experienced in the Jim Crow South, where they were barred from voting by both legal and terroristic means and found limited economic or educational opportunities.

Still, Chatelain stressed the mixed emotions that accompanied many on their moves to the Northeast, Midwest and West, where they still encountered racism and uncertain futures.

Her book’s cover image – one taken by photographer Wayne Miller – captures those emotions. It’s of a young, black woman in the 1940s sitting on a stoop with a newspaper fashion supplement open on her lap.

“It’s this fashion magazine that’s showing all these beautiful items, and she probably can’t afford these items, but we see that she has spent a little money on those fabulous shoes, and she’s thinking about being a city girl,” Chatelain said. “For many of the girls that I studied for my book, they are captured in these moments of mixed emotions.

“On one hand, they know that leaving the South was important to their families and could probably provide a better future, but the day-to-day realities of living in a new city sometimes made them wonder if it was all worth it.”

Chatelain described some of the continued hardships black girls faced, the way no matter how much education they received they were still often left doing domestic jobs. But she also talked about the new opportunities they found at a point when the nature of American life was fundamentally changing.

Chatelain’s lens for exploring the Great Migration through the eyes of young people was novel because their voices aren’t often captured by history.

In fact, Chatelain recalled researching her book and uncovering unpublished dissertations that documented the experiences of black women. In one instance, she found a collection of unpublished interviews sociologist E. Franklin Frazier had conducted with black girls and young women that were transcribed but lying hidden in an archival box in the basement of the library at Howard University.

More than 1,200 log on to annual Focus on Teaching and Technology Conference for new ideas, networking

Hispanic Heritage Month at UMSL: A Q&A with Marité Balogh and Luimil Negrón