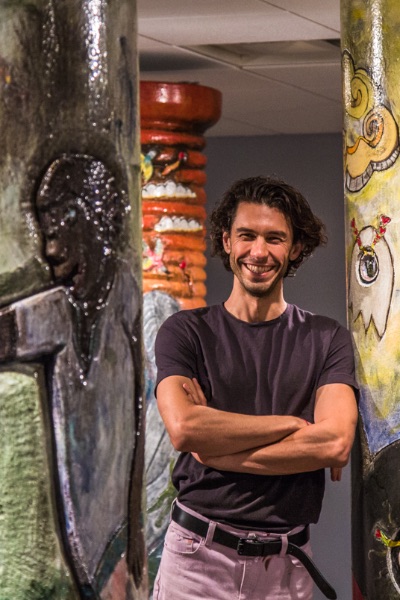 Marija Nelson Bleier and Tom Franco watched as a crane lifted the colorful, 800-pound sculpture 30 feet into the air.

The piece, carved and painted by Franco from an eight-foot-tall clay sewer pipe, was part of an exhibit Bleier had curated in her job as visual arts coordinator for the town of Danville. There were to be three of these huge ceramic sculptures set outside the town’s 1,200-square-foot gallery space.

For both UC Santa Cruz alums, that moment of flying art was a tangible example of the importance of collaboration and of community.

“It was an awesome moment,” said Bleier (Cowell ’99, art history). “I thought, ‘Look at all the people it takes to get this artwork in place.’”

“It was just so cool seeing them (the sculptures) in the air,” said Franco (Porter ’02, fine arts). “It really elevated what I was doing and what my group was doing. It was art to be seen.”

Bleier, 42, has worked in the art world since her graduation from UC Santa Cruz. She had jobs at a number of galleries and even had a temporary gig helping create the displays at San Francisco International Airport. For the last five years, however, she has run the town of Danville’s community art gallery. Her exhibits—she does six a year—have ranged from paintings to photos, from the serious to the playful.

One exhibit, titled “Surf’s Up,” for instance, featured surfboard art and included examples from Frank and Kevin Walsh of Santa Cruz, while another installation highlighted photos of the Vietnam War taken by the men who had fought it.  All of this done on a $10,000-a-year budget.

“Sometimes I’ll be watching a movie and get an idea,” said Bleier of how the exhibits are born. “Sometimes, it’s things I’m curious about or want to learn more about.  Or, I’ll see something on Instagram and think, ‘Oh, I love this.’”

Which is how she found Franco, a 38-year-old Oakland actor, sculptor, and mixed-media artist, who is also founder of the Firehouse Art Collective, which provides space for artists of all mediums in the Bay Area. She wanted to do a ceramics show, and his large-scale works caught her eye.

Franco—whose brothers James and David are well-known actors and his mother, Betsy, an acclaimed author—had taken a break from the smaller works he creates out of found objects to try his hand at larger-than-life ceramic pieces.

He and a group of four emerging artists he likens to a band with their collaborative creations and shared gigs, went to the Mission Clay factory in Phoenix, Arizona, he said. The factory not only manufactures big sewer pipes for municipal use but also siphons off a few of the cylinders for an artist-in-residence program that it hosts.

The pipes, which are carved when still wet, are perfect for public art, Franco said. “It’s a shape we live with already, that we live with very intimately. That’s what I love about found objects. You take shapes we all know and put them out of context so people can see them for what they really are.”

Bleier said Franco’s works are narrative and extremely approachable. “He just has this playful, fun, and inclusive energy as an artist. He also likes to do collaborative work.”

It was while Franco was a student at UC Santa Cruz that, he said, the idea of the power of collaborative creativity was born. Not only was the magic of working together evident in the studios on campus, he said, but it was also a centerpiece in his study of dance and martial arts.

According to Franco, he and his art mates created 12 of these big ceramic pillars, using knife and paintbrush, working with a kind of creative intensity. It was free-spirited and almost magical, according to him. Not only that, but it took teamwork—from flatbed truck drivers to crane operators—just to get the sculptures from Arizona to their spot in front of the gallery.

The big pieces drew people in, as art tends to do in a community, Bleier said, allowing people to step outside their everyday lives to experience something different.

“They (the pipe sculptures) are very exciting on a subconscious level,” Franco says. “Kids love them. Kids want to touch them. They come up and dance around them.”