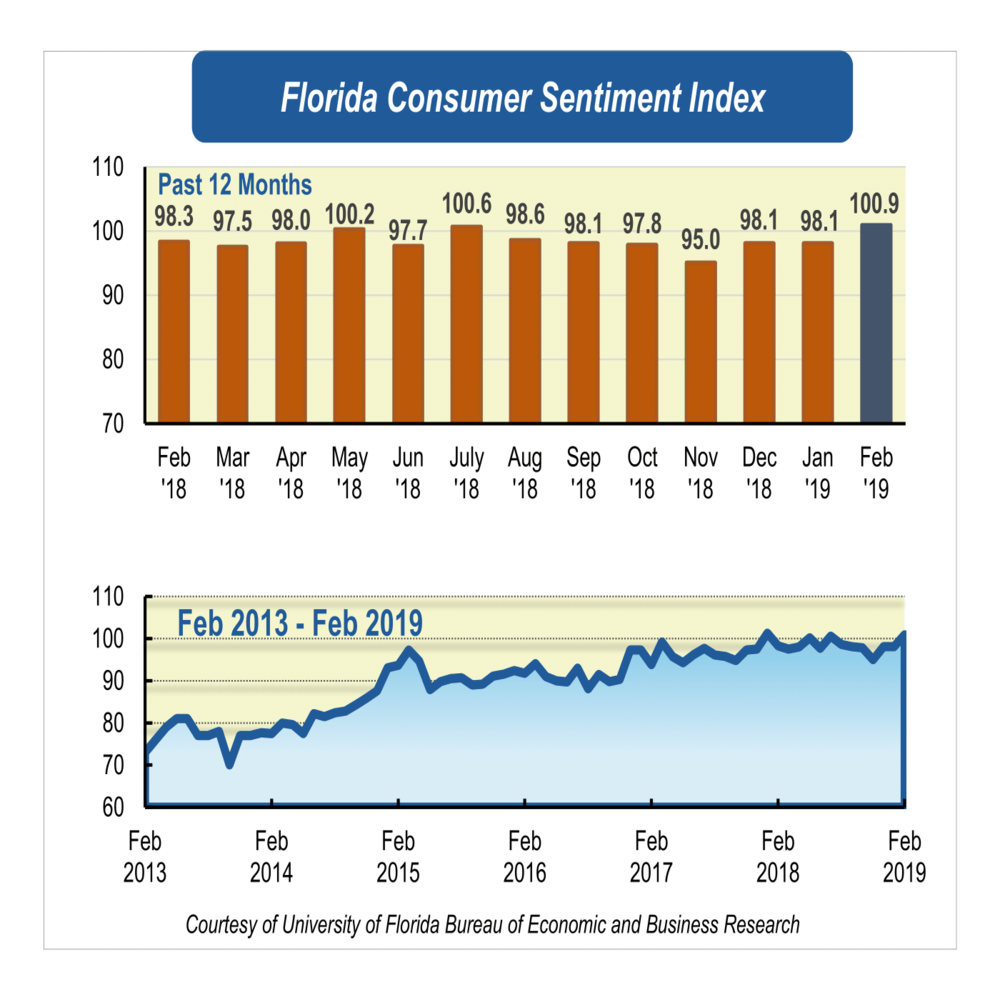 These strong levels of confidence have not been seen since January 2018, when consumer sentiment reached 101.3 points. This month’s reading is the second highest since March 2002.

Among the five components that make up the index, three increased and two decreased.

Floridians’ opinions of their personal financial situation now compared with a year ago increased 1.3 points from 93.8 to 95.1. It is worth noting that opinions varied greatly by gender and income levels, with male respondents and those with income levels under $50,000 reporting less-favorable opinions.

In contrast, overall opinions as to whether this is a good time to buy a major household item like an appliance decreased 1.1 points from 100.2 to 99.1. Again, men reported less-favorable opinions compared with women.

“Despite the differing opinions by gender, overall these two components of the index showed that perceptions regarding the current economic conditions increased slightly among Floridians in February,” said Hector H. Sandoval, director of the Economic Analysis Program at UF’s Bureau of Economic and Business Research.

“Overall, Floridians are more optimistic. The increase in February’s confidence comes mostly from consumers’ future expectations about the national economy in the medium- and long-run. Importantly, these outlooks are shared by all Floridians regardless of their gender, age or socioeconomic status,” Sandoval said.

Economic indicators in Florida remained positive. In particular, the labor market in Florida continued to add more jobs in December, and the monthly unemployment rate in Florida remained unchanged at 3.3 percent. Similarly, the U.S. labor market has continued to strengthen, and economic activity has been rising at a solid rate. As a result, the Federal Open Market Committee decided to maintain the range of the federal funds interest rate between 2.25 and 2.5 percent in their last meeting in January, stopping any potential increase in the cost of borrowing in the short-run.

“Looking ahead, in view of the realized economic outlook, we anticipate consumer sentiment to remain high in Florida,” Sandoval said.

Conducted Feb. 1-21, the UF study reflects the responses of 375 individuals who were reached on cellphones, representing a demographic cross section of Florida. The index used by UF researchers is benchmarked to 1966, which means a value of 100 represents the same level of confidence for that year. The lowest index possible is a 2, the highest is 150.

Details of this month’s survey can be found at http://www.bebr.ufl.edu/csi-data