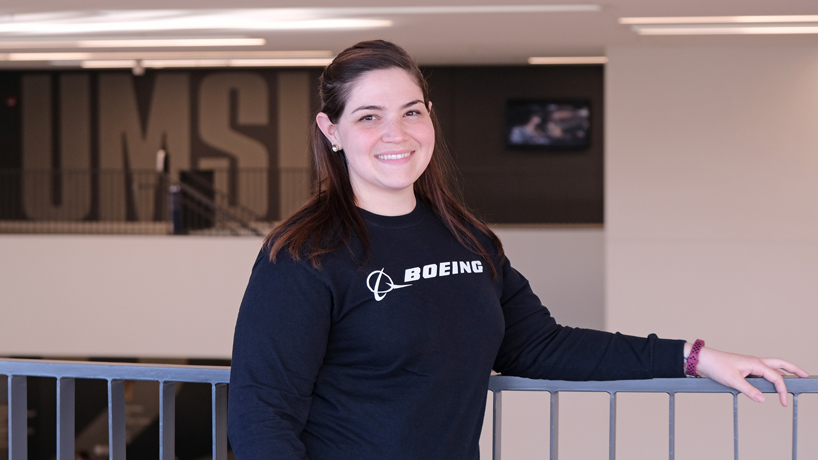 Nicole Lograsso, BSBA 2013, MBA 2018, acquired a job as a procurement agent for Boeing in 2016. She went on to earn her second UMSL degree in December and transition into a new role in supplier diversity in February. (Photo by August Jennewein)

Nicole Lograsso felt like she was about to reach the lowest point of her life.

She was unhappy in her job working nights doing quality assurance for QuikTrip. That discontent was only amplified because of the time missed with her young daughter due to her schedule.

Then, just as her confidence was plummeting, Lograsso got a call from Boeing.

“I was in shock and awe,” said Lograsso, who earned a BSBA from the University of Missouri–St. Louis in 2013. “I was able to get a job with Boeing right at my low point. It worked out really well, and it was right around my birthday. Things fell into place, so I was super excited. It was a great, amazing feeling.”

Now, more than two years into working for her dream company, Lograsso’s excitement about her career outlook hasn’t faded.

She began with the local aerospace company in August 2016 as a procurement agent, purchasing products to support Boeing’s defense units. The work focused mostly on advancing the production lines for Boeing’s F-15 and F/A-18 planes and building connections with suppliers.

“I didn’t accept my dream job right outside of college, which I think a lot of people feel pressure that they have to do,” Lograsso said. “I was really hard on myself for not having that job right away. Now, looking back and seeing that everything has fallen into place, I try to convey patience to other people so that they might not be as hard on themselves.”

Not long after starting at Boeing, Lograsso wanted to build on her positive momentum and decided it was the perfect time to pursue her second degree from UMSL: an MBA.

She originally started the graduate program thinking that she would simply complete the coursework and not spend any additional time on campus. Her attitude quickly changed.

Lograsso connected with James Campbell, professor and chair of the Department of Supply Chain and Analytics, who encouraged her to become involved in the department’s Executive Mentoring Program. The opportunity, which matched her with a director at Ameren, then inspired her to pursue a certificate in supply chain management and seek out a short-term study abroad trip to Finland.

“The MBA program was a really good experience overall, definitely more than I expected it would be,” Lograsso said. “Initially, I came in thinking I was going to come and get it out of the way and not worry about doing anything extracurricular. Then I got matched with a mentor, and that was great to get insight from someone that I could go to without feeling scared about what they might say or think.”

While balancing a budding career, parenthood and graduate courses was difficult at times, Lograsso graduated from the MBA program in December, and new opportunities continue to fall into place.

In February, she rotated to a supplier diversity position at Boeing. Through the role, she works to ensure the company acquires products from a wide range of suppliers, including small businesses, veteran-owned companies, women-owned businesses as well as corporations.

As Lograsso settles into this position and the rest of her career, she’s fueled by the same motivation that propelled her to first job at Boeing.

“I want to do well so that my daughter can have anything that I wasn’t able to get,” Lograsso said. “I want her to see me and say, ‘Mommy did it. I can do it, too.’”