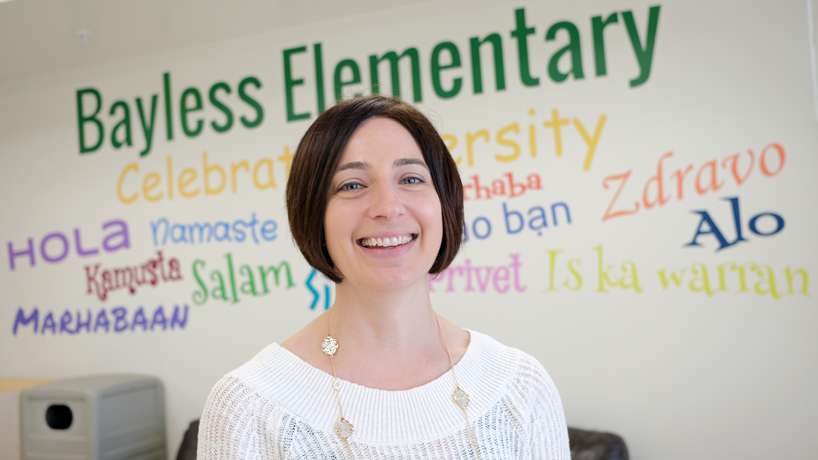 UMSL College of Education alumna Therese Shain is the only educator in Missouri and one of only 33 nationally to be part of this year’s class of Milken Educator Award winners. The honor, bestowed by the Milken Family Foundation, is for exemplary early and mid-career educators and comes with a $25,000 prize. (Photo by August Jennewein)

Bayless Elementary School staffers and third- through fifth-graders gathered Feb. 13 under the pretense of an assembly to celebrate students’ high scores on the MAP subgroup assessment.

But once Missouri Commissioner of Education Margie Vandeven finished up her 5-minute speech and Milken Family Foundation Chairman and Co-Founder Lowell Milken took his spot behind the lectern, it became clear that something else was up.

Milken talked about his foundation’s Milken Educator Awards, presented along with $25,000 unrestricted cash prizes to a select group of exemplary early and mid-career educators each year since 1987.

Therese Shain, a Special School District of St. Louis County educator who has taught special education students at Bayless for the past decade, was still trying to process Milken’s words when friend and fellow teacher Jamee Heidmann turned to her.

Milken called out Shain’s name and the crowd – which also included First Lady of Missouri Teresa Parson – burst into applause. Shain, who earned her BS in education from the University of Missouri–St. Louis in 2004, is the only Missouri recipient of the award this year and one of only 33 nationally.

In the moment, it was all she could do not to pass out.

“I’m not a big spotlight person,” Shain said. “I almost felt for a second that I might faint or something. It’s a lot of attention.”

Shain joins a group of more than 2,700 teachers, principals and specialists among past winners in the Milken Educator Network, including 47 from Missouri since the state joined the Milken awards program in 1996. She also has an invitation to the Milken Educator Forum from March 21-24 in New Orleans, where she gets to network with and learn from fellow educators as well as state and federal officials.

But that’s not what the Bayless students ask her about every day. That would be the cash prize. No, she doesn’t yet know what she’ll do with the money.

“I’m sort of a celebrity in the halls,” Shain said, with a laugh. “I’m more of a planner, so I want to really think about it.”

Milken selections are made in a secretive manner. There is no application process, per se. Candidates are vetted and chosen confidentially by panels convened by states’ departments of education, then recommendations are passed along to the Milken Family Foundation.

Only a handful of people knew Shain had received the award before the assembly. She had no clue.

“As a special education teacher, Therese helps her students reach through their challenges and have a voice in their learning,” Vandeven said in a press release. “She is an example of the type of effective educator every child deserves. I congratulate her on this outstanding achievement.”

Shain first became inspired to pursue a career teaching special education by her grandmother, who had speech and learning impediments and did not complete elementary school, which was common for special needs students at the time.

A native of Arnold, Shain went away to college for a semester but returned to the St. Louis area to pursue her bachelor’s degree at UMSL.

“I liked UMSL because you’re spending a lot of time in schools around the area,” said Shain, who went on to receive her master’s in educational counseling and psychology from the University of Missouri–Columbia in 2007. “You could develop some relationships doing observations, and it helped facilitate getting a real job. You were local.”

While teaching special education can be challenging, Shain takes pride in the way she has engaged her students in monitoring their own progress. The second- and third-graders she works with track their improvements in reading and make graphs of how they’ve grown.

“That way, they are more motivated,” Shain said. “They try a lot harder, and they’ll do a lot more at home. It’s almost as if they take more ownership themselves.”

She says practical lessons imparted by her UMSL instructors, such as remembering to take some time to decompress over summer vacation and to not take on more than she can handle during the school year or risk burning herself out, still resonate strongly with her.

She doesn’t remember anything in the lesson plans about dealing with sudden celebrity, though.

“It’s still a little shocking to me,” Shain said. “I’m kind of a humble person. A lot of people say that’s what they like about me. It’s crazy to me that they picked me out of all of the teachers in Missouri. I was almost wondering, ‘Really? Me?’ This is kind of hard for me.”