Wilson challenges assumptions of history, culture, race, and conventions of display with his innovative and evocative work 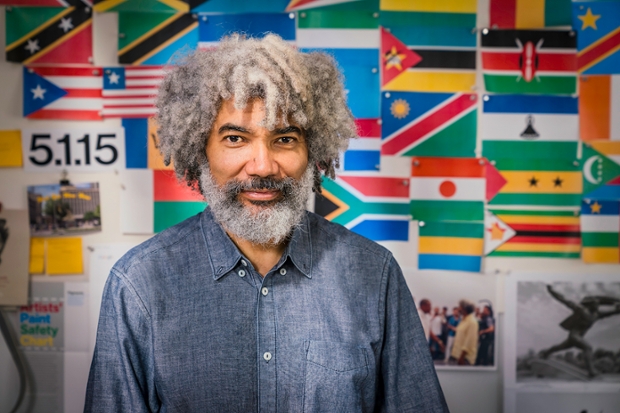 Renowned visual artist Fred Wilson has been selected as the 2019 recipient of Brandeis University’s Creative Arts Award. The award comes with a residency on campus during which the artist will engage with students, faculty and the Brandeis community.

Wilson challenges assumptions of history, culture, race, and conventions of display with his innovative and evocative work. By reframing objects and cultural symbols, he alters traditional interpretations, encouraging viewers to reconsider social and historical narratives. Wilson represented the United States at the 50th Venice Biennale with the solo exhibition Speak of me as I am. In 1999, he received a prestigious John D. and Catherine T. MacArthur Foundation “Genius” Grant.

“For nearly four decades, Fred Wilson has challenged traditional views of art, of the museum itself, and of people who were on the periphery but seldom the subject of traditional European-influenced works. I am so pleased that he will join the prestigious list of those honored with Brandeis’ Creative Arts Award,” said Brandeis University President Ron Liebowitz.

Since his groundbreaking and historically significant exhibition Mining the Museum (1992) at the Maryland Historical Society, Wilson has been the subject of many solo exhibitions, including the retrospective Objects and Installations 1979-2000, which was organized by the Center for Art and Visual Culture at the University of Maryland, Baltimore, and traveled to Saratoga Springs, Berkeley, Houston, Andover, and Santa Monica, before closing at the Studio Museum in Harlem. Other solo installations include So Much Trouble in the World—Believe It or Not! at the Hood Museum of Art, Dartmouth College, Hanover, New Hampshire (2005); Works 2001–2011 at the Cleveland Museum of Art (2012); Local Color at The Studio Museum in Harlem (2013); Black to the Powers of Ten and Wildfire Test Pit at Allen Memorial Art Museum, Oberlin College, Ohio (2016); Fred Wilson at the Neuberger Museum of Art, Purchase College, New York (2017); and Fred Wilson: Afro Kismet, which premiered at the 15th Istanbul Biennial in the Fall of 2017 and traveled to Pace Gallery in London and New York in the spring and summer of 2018, respectively. It is currently on view at the Maccarone Gallery in Los Angeles and will travel to the Gibbes Museum of Art in Charleston, South Carolina in 2020.

“I will be honored to accept Brandeis University’s Creative Arts Award,” Wilson said. “I know Brandeis is a place where students and faculty engage with many of the ideas that have been the focus of my work. This award is particularly meaningful to me given the importance of the Rose Art Museum as a home to modern and contemporary art. I look forward to spending time on campus.”

“Fred Wilson’s research-based, innovative museum projects deal with issues that resonate strongly with Brandeis’s history and mission. Through his art, Fred boldly interrogates marginalized histories and peoples, even as he uncovers and challenges social and racial injustice,” said Gannit Ankori, professor of art history and theory and head of the Division of Creative Arts.

After a long hiatus, the award was reconfigured as a biennial prize in 2015, with Fred Wilson to be the first visual artist to receive the renewed Brandeis Creative Arts Award.