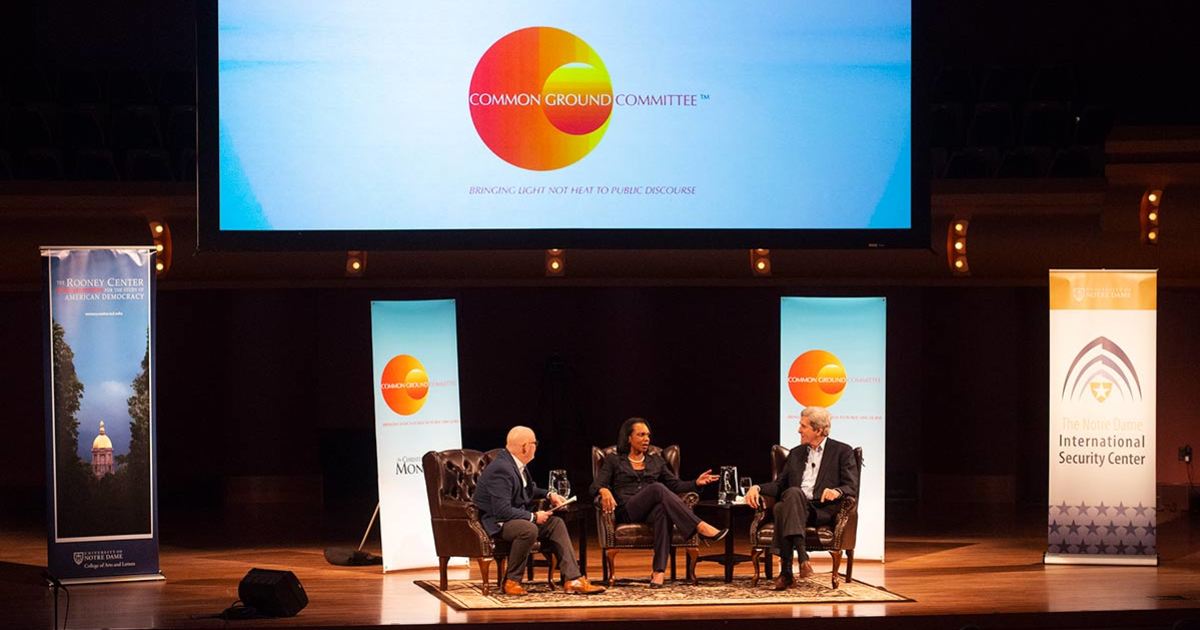 “Only 54.2 percent of Americans came out in 2016 to vote. We’ve got to vote, America; we’ve got to care about our own democracy,” former Secretary of State John Kerry urged as he and former Secretary of State Condoleezza Rice (M.S. ’75) took the stage Tuesday night (March 19) at the University of Notre Dame’s DeBartolo Performing Arts Center for the forum “America’s Role in the World.”

Rice began on the domestic front, stressing Americans’ civic duties. Tolerating no excuses for not showing up at the polls, Rice emphasized that her ancestors died for the right to vote. She encouraged the audience to own their democracy and get involved.

“You have no reason not to vote. If you don’t vote, you get what you pay for,” she said. “De Tocqueville was impressed with America’s civil society. I know here at Notre Dame that service is a big part of the curriculum and service to other citizens is the highest form of democracy.”

Focusing on America’s role on the world stage, moderator and Christian Science Monitor journalist Howard LaFranchi dove into some of the most pressing issues society faces, from climate change to the threat of nuclear aggression.

Kerry, a key figure in authoring the Paris Climate Agreement, has been outspoken in his criticism of President Donald Trump’s decision to pull out of it. Noting that each participating country decided individually what it would do to keep the global average temperature from rising to calamitous levels, Kerry said Trump lied to the American people about the burden it would put on the country.

“The bottom line is: We are not only not near a 2 percent decrease (in average global temperature), the top scientists have told us we have 12 years to get to .5 percent degree reduction,” Kerry said. “We are headed to 4 percent; that’s catastrophic. We have to change our politics. We have to hold politicians accountable.”

The Paris Climate Agreement boosted the renewable and alternative energy market, Kerry said — solutions Rice also touts. “What countries have to pay attention to are the three E’s: economic growth, environmental sustainability and energy mix. How do we still grow? Nuclear could be a big part of the answer. The French get almost 80 percent of their power from nuclear, and it’s clean.”

On immigration issues, Rice and Kerry both believe comprehensive reform is called for and, in fact, well overdue. Rice noted that some of the current rhetoric, regrettably, “others” immigrants, making them seem like outsiders. She also disagrees with so-called merit immigration that favors the privileged.

“I thought the idea was that people came here and America made them better. America is a country of immigrants. We’re going to rue the day we don’t have immigration because of the labor needs,” she said. “Most Americans think we ought to be able to have an orderly border. You need some way to deal with the 12 million people who are here and living in the shadows. We’re not the kind of country to round them up and deport them.”

Turning to populist and authoritarian leaders, LaFranchi asked about Russia and North Korea. Being a Russianist fluent in the language gave Rice an opportunity to get to know Putin well. She believes he needs an enemy and has decided that the U.S. is it. However, she stressed that we shouldn’t judge Russians based on Putin, saying, “Let’s isolate Putinism, not Russianism.”

Both secretaries agreed that Trump’s initial summit with North Korean dictator Kim Jong-un was a success, largely due to Rex Tillerson’s efforts to get other countries to impose harsh sanctions on North Korea. The second summit in February of this year was, as Rice put it, “a mistake.” Both Rice and Kerry said the U.S. should have gone into the summit with some kind of pre-agreement.

North Korea’s neighbor China also presents complicated issues for the U.S., particularly regarding trade and cybersecurity. As negotiations continue between Trump and China’s Xi Jinping, Rice thinks Trump has accomplished something. She believes that China lacks leverage due to its closed markets and slowing economy.

The U.S.’s failure to get tough on Syrian President Bashar al-Assad early on and to punish him for using chemical weapons on his own people was a blunder that Kerry said “cost us dearly.” Rice lamented that, now, any solution will have to come via Moscow. Acknowledging that the prolonged wars in the Middle East have caused national fatigue, Rice said the U.S. must stay involved.

Summing up their views on polarization in America, Rice and Kerry admitted that democracy is hard and sometimes messy, but worth the struggle. Kerry bemoaned the “hard-edge ideology” that now drives politicians in Congress, as opposed to the robust bipartisan debates he participated in as a senator. He also noted the increasing gap between America’s wealthiest and poorest people. “We have to let everybody rise, all boats at the same time. We have to make America fair again before we can make it great again,” he said.

Rice left the audience with this advice: “Try and put yourself in the company of people with whom you don’t agree. We’ve become afraid to talk to people who we disagree with. When you don’t encounter people who don’t agree with you, you think they’re stupid or venal. Don’t live in your own echo chamber.”

Notre Dame’s Rooney Center for the Study of American Democracy and Notre Dame International Security Center (NDISC) joined the nonprofit Common Ground Committee and Bridge ND (a chapter of Bridge USA) as co-sponsors of the event.