Taking the Time to Write it Out is Proving Beneficial for some SIUE East St. Louis Charter High School Students - EduBlog.News

Taking the Time to Write it Out is Proving Beneficial for some SIUE East St. Louis Charter High School Students

Taking the Time to Write it Out is Proving Beneficial for some SIUE East St. Louis Charter High School Students 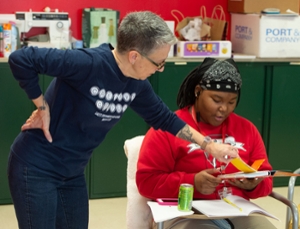 CHS’s Creative Writing Club is in its second full year of operation, facilitated by Valerie Vogrin, professor in the Department of English Language and Literature, and Carolyn Kribs, CHS social studies faculty associate. After school, students assemble in CHS’s Peace Room for a no-hold’s-barred session of imaginative writing. 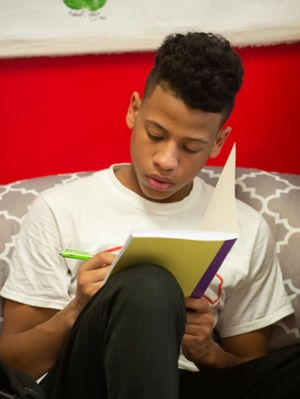 The SIUE College of Arts and Sciences’ Targeted Funding Initiative (TFI) helps make the Writing Club possible, providing money for supplies and participation prizes. The CAS TFI utilizes funding acquired through the College’s Winter Session courses and is supplemented with other CAS internal funds, according to CAS Dean Greg Budzban. Since the initiative’s launch in 2015, Budzban has provided more than $600,000 to faculty and staff.

“The club is meant to be fun, and to encourage students to be comfortable expressing themselves,” said Vogrin. “We want them to write fluently and not to censor themselves.”

“We kick off each meeting with a prompt,” she continued. “Students write for 30 minutes and then we invite them to share.”

The most recent session focused on fiction. Students passed around the spiral-bound Amazing Story Generator book and randomly selected a panel from each of the three rows.

A sample of the writing choices selected by students:

“I like creative writing. It gives me a chance to explore what’s inside my head,” said CHS freshman Evan Bonner, a first-time participant. “I like to write poetry, because it can be emotional.”

However, Bonner tried his hand at prose with the prompt, “After too many cups of coffee – an avid comic book collector – refuses to leave the bathroom.”

“I had fun with it, but I made it depressing,” he said. “When the comic book collector was young, he liked to read and collect comic books. The man grew up, got married and had a son. He also had a good job. Then he finds his old comic books and becomes obsessed with them.”

“He reads them all the time and loses his job,” continued Bonner. “His wife leaves with his child because he didn’t spend any time with them. He fell into a deep depression, and all he drank was coffee. He then considered killing himself and went into the bathroom. His sister came over, tried to get him out of the bathroom, talking him out of killing himself and into taking back his life.”

“There is an out-of-work writer who goes on a date,” White explained. “He tries to rob a bank for his date, and his date is the get-away driver.”

“I like to write stories. I do it for fun,” said White, who has attended the writing club three times.

“When I put an idea down, I can take it anywhere,” said Danisha Gilmore, a CHS sophomore, who was one of the three prizewinners. Gilmore received candy and an award-winning young adult novel by Meg Medina.

The prize drawing at the end of each meeting is for added fun, according to Vogrin, but the real prize is the writing itself.

“Most people are better off for having some writing in their lives,” added the professor.

“It’s extremely gratifying for me to see programs funded by the Targeted Funding Initiative foster creativity and enrich student’s lives,” said Budzban. “This result is precisely why I created the TFI program.”

Fourteen students attended a recent writing session, but typically approximately seven students stay after school each Tuesday for the club, according to Kribs.