For Sarah Drummond ’93 B.A., life is imitating art. Earlier this year, with her new book on change leadership just weeks away from release, she was called to a new leadership position for a school that has undergone momentous change of its own. 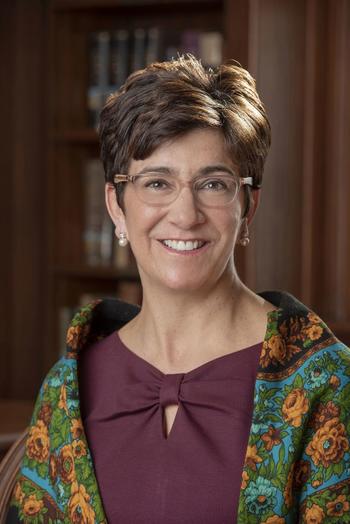 On July 1, Drummond will become Founding Dean of Andover Newton Seminary at Yale Divinity School. She will be the first woman to lead Andover Newton in its over 200-year history.

In the March episode of Yale Divinity School’s Quadcast, Drummond gives advice on how a leader can successfully navigate and implement change.

“Nobody changes without a deep sense of loss,” Drummond says. “And if you don’t have something just as good to put in their hands as that which you are asking them to give up, to expect people to change is just crazy.”

Many of Drummond’s strategies apply to both faith and business organizations. In fact, Drummond does not see a major difference between the two spheres. She believes that modern business is influenced by the world of religious leadership and that community building is the “older sister” to business. Drummond points to the goal orientation found in biblical teachings as evidence.

“I really resist the notion that having and striving towards a goal is somehow a business idea,” says Drummond. “Jesus told us what the world would look like if it was an adequate reflection of what God wanted for it. In the kingdom of heaven there is no hate, there is no hunger, there is no poverty. Those were goals!”

In her new book, Dynamic Discernment: Reason, Emotion and Power in Change Leadership, Drummond provides tools leaders can use when their organizations are hit with crisis, controversy, or change.

In the podcast interview, Drummond, an ordained minister in the United Church of Christ, also provides perspective on the sexual abuse crisis in the Catholic Church.

“It is not about sex, it is about power. And abuse of power is something that comes with power that lacks accountability,” says Drummond.

Drummond believes lay people can play a role in organizational change of a church. She argues the Catholic tradition of liberation theology is one of the best resources for community members to take back power.

One of Drummond’s key strategies to fix a damaged dynamic between leadership and laity is something she terms “pockets of possibility”: when those on the receiving end of power engage in dialogue with those in power about common goals.

“Where do you see something those in the position of power want, that you also want? Try to build a bridge around that shared interest,” Drummond advises.

On today’s religious landscape in the United States, the most common mistake Drummond sees faith leaders making is clinging to the mindset that being right is all that matters.

“I see religious leaders getting into all kinds of frustration with their communities because rather than connecting with people, they are trying to point out how right they are or how wrong another person is. If the faith community feels like their religious leader might judge them, they won’t be able to form a trusting bond and relationship,” says Drummond.

Listen to the full episode here. A compendium of all episodes of the YDS Quadcast can be accessed at divinity.yale.edu/quadpod.