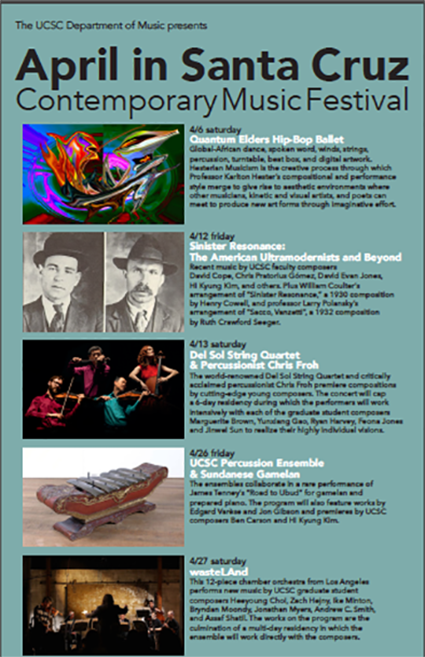 The festival will include performances by two internationally known ensembles, the Del Sol String Quartet and wasteLAnd—each playing the work of UCSC student composers.

“The world-renowned Del Sol String Quartet with percussionist Chris Froh will be in residence for a week in early April, refining the works designed especially for them by our culturally and intellectually diverse graduate composers,” noted UC Santa Cruz music professor David Evan Jones. “Their performance will be on April 13.”

“WasteLAnd, a virtuosic 11-piece ensemble from Los Angeles, also arrives in late April to work in residence for several days on pieces conceived specifically for its unique extended instrumental capabilities by another set of graduate composers–each with their own highly individual concept,” he added. “This engaging collaboration will reach its culmination in concert on April 27.”

Jones is the director of this year’s April in Santa Cruz festival, the Music Department’s annual celebration of new music. Each year there is a different director, and each one takes a different tack.”

“Because of the community-based emphasis of the festival, the director is both a facilitator of ideas already ‘in the air’ and an innovator and mover who creates and develops opportunities for expanding and communicating our creative potential,” said Jones.

“We were extremely fortunate this year to receive support from a variety of sources, including a generous gift from the Vincent J. Coates Foundation, which made possible the residencies of both the Del Sol String Quartet and the wasteLAnd ensemble,” Jones added. “The announcement of those residencies, in turn, sparked a whirlwind of musical speculation, innovation, and experimentation by our graduate students.”

That concert will also feature music by UCSC faculty composers, including Hi Kyung Kim’s new version of her Untamed Brush I for viola and Jones’s new work for violin and Disklavier (computer-controlled piano). Festival founder David Cope will additionally bring back Parallax (1974), an evocative work for voice and piano, and Chris Pratorius Gomez will conclude the evening with his setting of Edgar Allen Poe’s A Dream Within a Dream.

The UCSC Percussion Ensemble and Sundanese Gamelan are featured in the first half of the April 26 concert, followed by two premieres by music faculty–Ben Leeds Carson’s Lament and Conductus for Haegeum (Korean vertical ‘violin’ played by Soo-yeon Lyuh) and electric guitar played by the composer, and Hi Kyung Kim’s the westwind holds my melting heart! for clarinet and percussion.

All concerts take place at the Music Center Recital Hall on the UC Santa Cruz campus and are free and open to the public. Doors open at 7 p.m. Concerts begin at 7:30 p.m. For more information, visit the Arts Division web site.