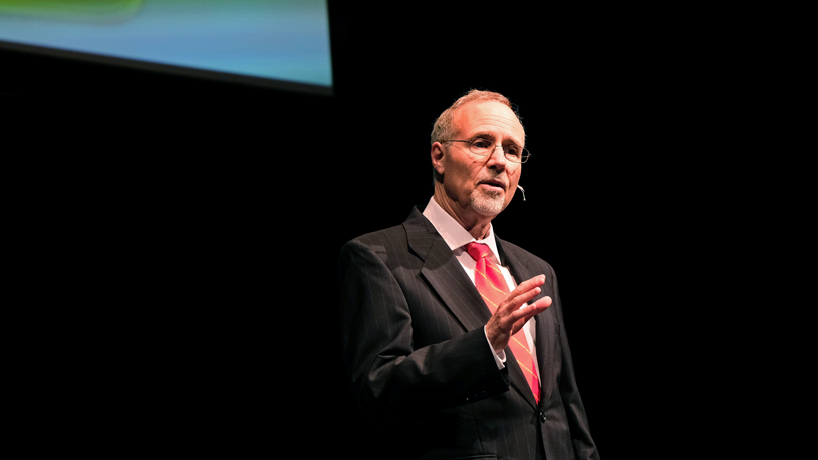 University of Missouri–St. Louis Chancellor Tom George announced Thursday that he’ll be retiring from his post on Sept. 1. He is the longest-tenured chancellor in the university’s history. (Photo by August Jennewein)

Chancellor Tom George has overseen a physical transformation of the University of Missouri–St. Louis campus during his 16 years of leadership while helping the university grow as an engine for research and expand its global reach. In that time, he has focused on the core mission to educate the workforce of the St. Louis region.

George announced Thursday that he’s retiring from his position effective Sept. 1. He’ll leave as the longest-tenured chancellor in the university’s history.

Barbara Harbach, George’s wife, is also retiring from her position as Curators’ Distinguished Professor of Music, chair of the Department of Music and director of the School of Fine and Performing Arts.

“For the past 16 years, my wife and I have had the privilege to serve at the University of Missouri–St. Louis,” George said. “We’ve found the work rewarding and the people outstanding – all individuals dedicated to the betterment of the region and themselves. That’s what makes it so hard to announce that Barbara and I will be retiring from our respective positions.

“It has been the greatest experience of my professional life to serve as chancellor of UMSL and to represent the students, faculty, staff and alumni in our efforts alongside numerous community and business organizations. Through these endeavors I’m constantly reminded that – without a doubt – no other university brings more to bear on the success of the greater St. Louis region than UMSL.”

George, joined by University of Missouri System President Mun Choi, made the announcement at the Millennium Student Center in front of UMSL faculty, staff, students and alumni.

“As UMSL’s longest-standing chancellor, Dr. George has truly transformed lives through his work,” Choi said. “I am grateful for his contributions to UMSL and the UM System. In his 16 years at UMSL, he has made a lasting impression on the St. Louis region and the entire state of Missouri. We are indebted to him and Dr. Harbach for their service and wish them well in retirement.”

George assumed his position as UMSL’s chancellor in September 2003. He brought with him more than 30 years of experience in higher education, including serving the previous seven years as chancellor at the University of Wisconsin–Stevens Point.

Throughout his tenure, George has represented UMSL while championing higher education throughout the St. Louis region and nationally. He will continue serving as the president emeritus of the Coalition of Urban and Metropolitan Universities through 2020.

“Barbara and I are excited about entering this new stage in our lives,” George said. “While we have no set plans, UMSL and St. Louis will always be part of our past and future. It is a community that has adopted us, affected us and, in many ways, educated us. I would like to thank all students, faculty, staff and alumni for their support over the past 16 years and letting us serve the institution and be part of the UMSL family.”

Though George will continue his responsibilities until Sept. 1, Thursday’s announcement allows the university to begin preparing for his departure from UMSL’s top administrative position.

“I will be meeting with members of the UMSL community to develop a transition plan and the naming of an interim chancellor,” Choi said. “We will launch a national search for a permanent chancellor to continue to build upon the successful programs of excellence at UMSL. I look forward to working with the UMSL community – faculty, staff, students, alumni and friends – during this transition.”