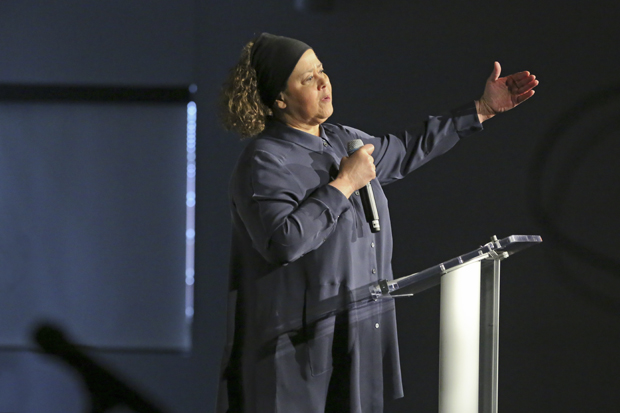 Anna Deavere Smith performed segments of her award-winning one woman show “Notes from the Field,” and reflected on her approach to her work during her Richman Fellowship presentation Thursday in Sherman Function Hall.

“When I was a girl my grandfather said, ‘if you said a word often enough it becomes you,'” Smith said. “So I’ve been going around America with a tape recorder for many years now with this ridiculous idea that I could become America, word for word. Of course I haven’t done that, but it has kept me busy.”

Smith’s one-woman works for the stage often explore issues of race, community, and identity through testimony gathered from hundreds of interviews with real people. Smith plays multiple — sometimes dozens of — characters, all closely based on those interviews. Her work has earned accolades including the National Humanities Medal and a MacArthur “genius” grant.

To create “Notes from the Field,” Smith conducted interviews with more than 250 people across the country with a focus on issues of poverty, violence, criminal justice and education. Seventeen of those interviews were transformed into character in the play, with each telling their own story. It won an Obie Award in 2017, and a television version was released on HBO last year.

Along with her work for the stage, Smith is also well-known for his roles on television shows like “Black-ish,” “For the People,”  “Nurse Jackie” and “The West Wing,” and she’s appeared in films including “The American President,” “Rachel Getting Married” and “Philadelphia.”

Smith was brought to the Brandeis campus as the 2019 Richman Distinguished Fellow in Public Life. The fellowship featured a two-day residency during which she engaged with the university community and delivered her Richman presentation, which included a Q-and-A session with Marya Levenson, the Harry S. Levitan Director of Teacher Education and Professor of the Practice of Education, and an award presentation from Brandeis President Ron Liebowitz.

“We are honored to have Anna Deavere Smith here, she is one of those courageous individuals who holds a mirror to our contemporary society who asks us to reflect along with her how it might become more equitable and just,” Liebowitz said.

The Richman Fellowship was created by Brandeis alumna Dr. Carol Richman Saivetz ’69, and her children, Michael Saivetz ’97 and Aliza Saivetz Glasser ’01, in honor of her parents, Fred and Rita Richman. The fellowship recognizes individuals active in public life whose contributions have had a significant impact on improving American society, strengthening democratic institutions, advancing social justice or increasing opportunities for all citizens.

The fellowship is hosted by the International Center for Ethics, Justice and Public Life on behalf of the Office of the President.