Basement Records is bringing talent to the surface - EduBlog.News

Basement Records is bringing talent to the surface

Basement Records is bringing talent to the surface

Founded by Avi Hirshbein ’19, the club is a window into the recording industry 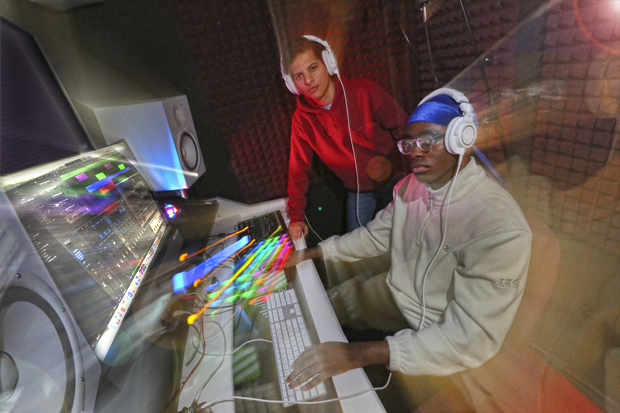 Avi Hirshbein ’19 realized what he wanted for a career early in his first year at Brandeis: He set his sights on the music industry.

Brandeis didn’t have a major or program specific to the music industry, but it did offer resources and a community that served as a canvas for him to create his own vision.

“I found this community of support at Brandeis,” Hirshbein said. “If you have initiative, there are always people who want to help you.”

Hirshbein is the founder of Basement Records. He has loved music for as long as he can remember and started writing and performing songs in elementary school. As he got older he became more interested in the business side of music. When he enrolled at Brandeis, he started thinking about how he could pursue a career in a field he was passionate about.

He originally envisioned Basement as a student-run record label, but it has morphed into a recognized university club that brings together students with an interest in music to learn through experience. Recording tracks is just one small part of what Basement Records does. The club hosts training on editing and production, hosts events like the Hip-Hop Cypher (the hip-hop equivalent of a jam session) and co-organizes a competition for musical acts to open Brandeis’ annual SpringFest concert.

To get Basement Records going, Hirshbein recruited a small group of friends with interests in different areas of music – production, performing, marketing and more — who liked his vision. What was missing was a place to meet, record and learn.

“We realized we needed a space, a headquarters,” he said.

That’s when he learned about Sound and Image Media Studios (then known as the Getz Media Lab), and he met the studios’ manager, Mark Dellelo. Located in the Brandeis University library on Farber Level 3, Sound and Image Media Studios (SIMS) features equipment, software and services for video and audio production. It also provides training and support in video production, audio production, digital photography, graphic design and animation.

SIMS has become Basement Records’ home base. The club hosts workshops on editing software and utilizes the Sound Studio, a space that received major upgrades thanks to the club’s involvement.  New equipment and acoustic treatments were installed in the Sound Studio in 2016, in large part because of the advocacy of Basement Records for revitalizing the space, Dellelo said.

“The booth we installed to improve the acoustics in that space came about because of them, and they’ve been our partner in enhancing the equipment inside it as well,” Dellelo said. “They made the case that there was a real interest in having a professional-level recording space that the whole community could use.”

Hirshbein, a business major, now has his eyes on the future. He has had summer jobs working for major record labels, and he’s managing the Brandeis-founded music group “Late Night Thoughts.” He isn’t sure what he will be doing next, but he feels prepared to take on the music industry, and he hopes that Basement Records will continue long after he has left campus.

“I really want it to keep going. I hope I have left a lasting legacy at Brandeis,” he said.

To do that, he decided to step down as president after his junior year and handed the club over to Bethel Adekogbe ’20. While Hirshbein is all about the business side of music, Adekogbe loves production.

“Making music is so honest, and it’s a super creative way to express yourself,” he said. “Not only is it something that you can perform, but you are creating. There’s something you can listen back to and enjoy and appreciate.”

Adekogbe, who also works as a student support specialist in the SIMS lab, sees Basement Records as a place where people can learn from each other.

“Basement is a great place for anybody looking to dip their toe into the musical waters and figure out,” he said. “I’m so amazed by what Avi was able to create and I just really want to build off that and keep it going.”

It will continue to have the support of Dellelo, who views Basement Records as a valuable community partnership. The club has helped bring more students into SIMS and raise awareness of its resources across the campus community.

“I’m really interested in community building, and Basement Records is my partner in doing community outreach,” he said. “The only way to learn how to do all this, audio production, video production, is to form a community of practice around it.”