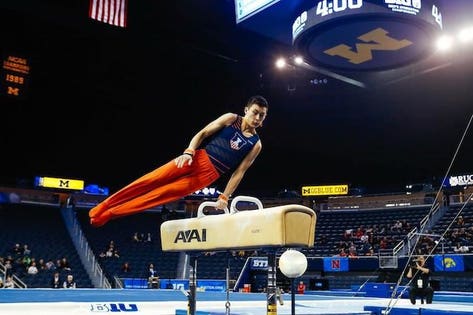 Will Brandon Ngai become the youngest person to ever graduate with an M.B.A. from a top business school?

Probably. Pam Black, one of our contributing authors at Poets&Quants, has written an entertaining and inspiring story on Ngai. She writes that by the time he is 20, Ngai will have an M.B.A., a bachelor’s in engineering and three NCAA championships under his belt.

It’s an intriguing question because M.B.A. applicants are forever wondering if they are either too young or too old to apply to a top business school. That was clearly not a concern for Ngai.

A gymnast and native of Sacramento, California, Ngai is finishing his first year at the Gies College of Business at the University of Illinois Urbana-Champaign. He is the youngest athlete ever to win an NCAA championship, in the pommel horse — and his coach says he has worked hard enough and is good enough to go on to the 2020 Summer Olympics in Tokyo, Japan.

But academics have always come first for Ngai, which is why he’s hanging up his grips to focus on his education—specifically the acquisition of an M.B.A.

“I was getting tired by the end of my senior year,” he says. “It wasn’t the gymnastics itself; I was just ready to move on to other things, whether that means a career or continuing my education.”

Ngai is used to being the youngest person in the room. It doesn’t even faze him anymore.

“It definitely is a little weird, but it’s normal to me,” said Ngai, a first-year M.B.A. student who is a three-time NCAA All-American, 2016 NCAA champion, and 2017 Big Ten champion. “When I was 14 years old, my junior year of high school, I took part-time classes at the community college with students who were 21-22 years old. It doesn’t take long before it becomes normal, and people view me based on the quality of my work and performance instead of my age.”

Early on, he learned the discipline and diligence that put him ahead of his peers. He credits his parents, Penny and Peter, dentists who share a practice in Sacramento, for guiding him and his two younger brothers in their activities.

Brandon’s mother, who was also a gymnast, started him on the pommel horse at age 4. “The idea was, it’s a great sport to start your kids out with because they get a lot of core strengthening and coordination,” he says. His parents drove him to daily practice and regular competitions. “It was expensive and time-consuming, but they were always willing to do it,” he says. “Even from a young age, they were always setting me up for my future.”

His parents also required their sons to do home study during the summers. He hated it at the time. But the extra work enabled him to skip two grades. He also took undergraduate college classes during high school.

When Brandon graduated from high school at the ripe young age of 15, he looked for a college that combined his main interests, gymnastics and engineering. “Growing up, I loved to figure out how things worked,” he says. He liked large vehicles and woke up early to see the garbage trucks. Planes were a particular passion and he dreamed of becoming an aerospace engineer.

The University of Illinois offered both a well-regarded engineering program and a leading gymnastics team. The school has “one of the most-storied gymnastics programs,” says Associate Head Coach for Men’s Gymnastics, Daniel Rubeiro, who recruited Brandon. “We’re third in the country out of 28 Big Ten titles.”

But in part because of his youth, Brandon got off to a rough start. “He had the talent, but he was competing against guys who were much older and physically more mature,” says Rubeiro. Ngai was disappointed that he didn’t make the lineup in his first year: “I remember looking at the NCAA scoreboard and thinking, ”Why can’t I be up there?”

Rubeiro says Brandon’s analytic approach helped him reverse the situation. He understood what he needed to do to improve and how to stay focused. Thereafter, Brandon won all American for the next three years. In his sophomore year (2016), he was individual NCAA champion, and in 2017, a Big Ten champion.

In his final year, his numbers pushed his team from No. 2 to the top of the Big Ten.

Ngai excelled academically as well. “Intellectually, he’s just superior,” says Rubeiro. “I thought, ‘At 16, this kid is 10 times smarter than me, and I’m twice his age.’” Rubeiro adds that Ngai can dumb down his brilliant engineering ideas so others can understand them: “He has the IQ and the EQ.”

By graduation, Brandon was losing enthusiasm for gymnastics and engineering. In his senior year, he decided he could put his quantitative knowledge to better use in finance and business.

He wanted an MBA but had no money to pay for it and no business experience. In addition, the GMAT deadlines were flying by. There were only two and a half weeks left until the next one. With some doubts, he took it. “It was a little stressful,” he says. “But I just tried to do what I could.” He scored 740 out of 800.

Without much looking, Ngai chose his alma mater, interviewing at the Gies College. The school offered him a full-tuition scholarship.

Part of the attraction was the school’s familiarity. “We have an incredible team culture and we were a family to him,” Rubeiro says. “It’s a fantastic school, and at age 18, he didn’t necessarily want to leave that family.”

That sense of camaraderie carried over to business school where the class is limited to 50 out of a total 6,000 business students. “It’s small enough so that you can get to know everyone,” Ngai says.

Despite his inexperience, engineering gave him “a great quant background” that he can adapt to business projects and classes. His favorite part of the curriculum is action Learning, where a team of six students works with a real-life top company to help it solve business problems. “I like that because I’m a learn-by-doing person,” Ngai says.

In the first action Learning course, the team worked with a major agricultural manufacturing company on how to manage seasonal demand. The second problem is working with a Brazilian retailer to get its health-care costs under control.

His marketing professor, Hayden Noel, who is also academic director of the M.B.A., remarked on Ngai’s focus and maturity. “He was always well prepared and eager to defend his position.” Based on Brandon’s experience, Haydon was surprised to learn that he wasn’t aged 25 or 26.

Because his scholarship only covers tuition, Brandon works 20 hours a week with AXIS Capital inside the University of Illinois Research Park, and he will intern this summer with USAA at their corporate office in San Antonio, Texas.

Taking the 20 hours out of his week is no hardship. He’s used to training in gymnastics 20 hours a week. He even works after he’s done with school and his job. He likes to devise software projects such as a gymnastic app to help coaches.

What does the future hold? Ngai is keeping his options open, but leaning towards quant finance, asset management or maybe insurance. Whatever he chooses he shouldn’t have a hard time getting a job. The placement rate for Gies MBAs is 91% in the first three months after graduation, and the averaging starting salary for the class of 2018 was $91,500.

In the long term, like his parents, Ngai wants to start his own business when he has the right idea and resources. “That’s been one of my aspirations,” he says, “to be self-employed and build something from the ground up.”