R Matthews is ready to inspire the class of 2019 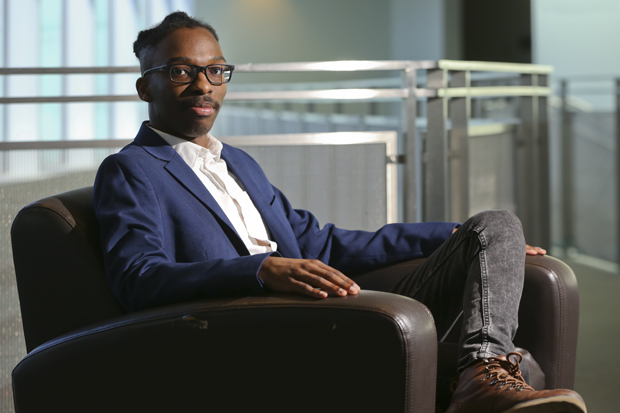 Meet R Remi Matthews ’19, the Brandeis senior with a cool name and an infectious smile.

Running into the Atlanta, Georgia native on campus means you’ll likely see him jamming out to music or hanging out with his friends.

At Brandeis, Matthews is a Posse Scholar double-majoring in computer science and African and Afro-American Studies.

And his one-letter first name?

Matthews says his friends never get tired of having fun calling him out in public.

“Sometimes people joke around and call me L-M-N-O-P or A-B-C or say ‘How R you,’” Matthews explains as a smile unfurls on his face. “Up until my sophomore year, I went by just Remi, which is my middle name. But it’s kind of a weird story.”

“My dad’s family has a tradition of giving all the first born males a name that starts with ‘R,’” Matthews says. “He also had a friend whose name was ‘E’ so he figured it would be cool to just make me ‘R’. My mom said it was a stupid idea. But here I am!”

Matthews will have one more chance to make an impression on campus: He was recently elected by the senior class to give the undergraduate address at Commencement on May 19.

BrandeisNOW caught up with R to learn more about his life at Brandeis:

BrandeisNOW: When did you realize you made the right choice to come to Brandeis?

R Matthews: I had my fears, being far from home. But I remember when I came to tour the school and do an overnight, I stayed with a fellow Posse Scholar. I remember me and my Posse, and some older Posse students, maybe 20 of us, hanging out in one room. And out of nowhere my host comes in with a bunch of packets of Hi-C fruit punch, asking us if we wanted any. Something about that really set the tone for the kind of place this is – the environment is super welcoming and nice. Something about that experience told me I would be at home here.

BNOW: What do you nerd out about?

RM: Music, technology and people. I like catching up with friends on campus. And I always have my headphones in, though. I like all different types of music. Hip hop, reggae, and also R&B. I am really interested in original soundtrack scores, I just love the instrumentation.

BNOW: What do you do for fun in Boston and Waltham?

RM: I am definitely a concert junkie. I went to like seven last semester, going out into Boston every other weekend. In terms of Waltham, I just like eating food. I love going to In a Pickle and Joseph’s for breakfast, and Pho and Spice is great for pad thai.

BNOW: Who has your biggest mentor been?

RM: Joelle Robinson ’18, she was in Posse and an African American student who served as the computer science undergraduate departmental representative. I remember when I first came to Brandeis and started in computer science, I hated it and was really struggling. I wanted to drop the major. But she encouraged me a lot and told me that I had to stay with her. Now I’m still with the major and would love to pursue computer science as a future career.

BNOW: How will Brandeis help you make a difference?

RM: I think one thing that I really appreciate about Brandeis is how much it revolves around the people here. And to be clear, all the people here are very interesting and want to make a difference in the world – a student in my hall my freshman year is currently a state senator; many of my friends are involved in community service. Being around people like that encourages me to do the same thing, to better the world around me.