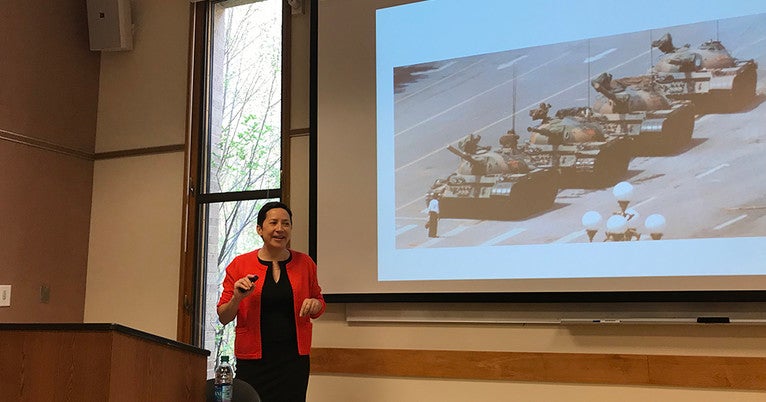 Just two months shy of the 30th anniversary of the Tiananmen Square protests in China, journalist Louisa Lim challenged the suppression of the event’s remembrance during a Poynter Fellowship talk in Luce Hall on April 23. Her talk was titled “Tiananmen at Thirty: Memory as an Act of Resistance in the People’s Republic of Amnesia.”

Lim is the author of “The People’s Republic of Amnesia: Tiananmen Revisited” and an award-winning journalist who has reported from China for the BBC and NPR. She shared anecdotes and research from her book, which draws on her extensive reporting of Tiananmen events and reveals their lasting consequences. The student-led protests for democracy and human rights in Beijing, and the Chinese government’s subsequent retaliation using violent force, are a momentous part of Chinese history, yet most citizens today ignore its anniversary, according to Lim. Her book’s pointed title reflects that “amnesia has become a state-sponsored sport,” she told her audience.

In her book, Lim investigates how the large-scale forgetting of such a watershed event is an overwhelming feat of censorship by the Chinese government. One of Time Magazine’s most influential images of all time is the “Tank Man,” an unidentified Chinese man blocking a line of military tanks the morning after the protests. This image is instantly recognizable worldwide, yet per Lim’s survey of university students in China, most did not even recognize it.

Against this backdrop [of censorship], memory is an act of resistance.

“This shows the extent of the great forgetting that’s happened both on an individual level and a collective level,” Lim said. “Forgetting is not just something imposed from above; it’s something that people have had to cooperate with.”

Since 1989, questioning the official Chinese narrative of history is inconvenient and even dangerous because memory has been politicized, Lim said. As a result, activists like the Tiananmen Mothers are still being imprisoned or detained for acts relating to Tiananmen to this day.

“[People] have colluded with this forgetting because remembering is not just inconvenient — it’s of no benefit, and the cost of memory has intensified over time,” Lim explained, adding that “those people who refuse to forget are punished.”

Lim also discussed the difficulties that journalists often face while covering issues in China, which intensify around the anniversary of Tiananmen. As a journalist with a decade of experience of reporting from China, Lim described her careful methods and extreme precautions such as writing on an offline laptop kept locked in a safe.

“There is this long and sustained campaign to influence the way that the West reads about Tiananmen,” Lim said. “The repression around anniversary coverage has become normalized, and so fewer stories get told. So, in many ways, the repression does work and it’s a really hard subject to cover. So, you may ask, how did I write my book? There were three main things that I depended on: stealth, preparation, and most importantly, luck.”

Throughout Lim’s time in China, she spoke to artists, mothers, students, and even an ex-soldier who all choose to resist the pervasive “amnesia.” Lim saw these Chinese activists as a force of remembrance, as are the academics and journalists who continue to pursue the truth about Tiananmen 30 years later, she believes.

“Against this backdrop [of censorship], memory is an act of resistance,” Lim said. “This is true inside China, and increasingly outside China as well. As academics and students, we should feel free to study and talk about whatever we like. That’s the true freedom of thought and academic endeavor. That’s why it’s important we have talks like this and that we still discuss Tiananmen openly today.”