A personal story of economic segregation 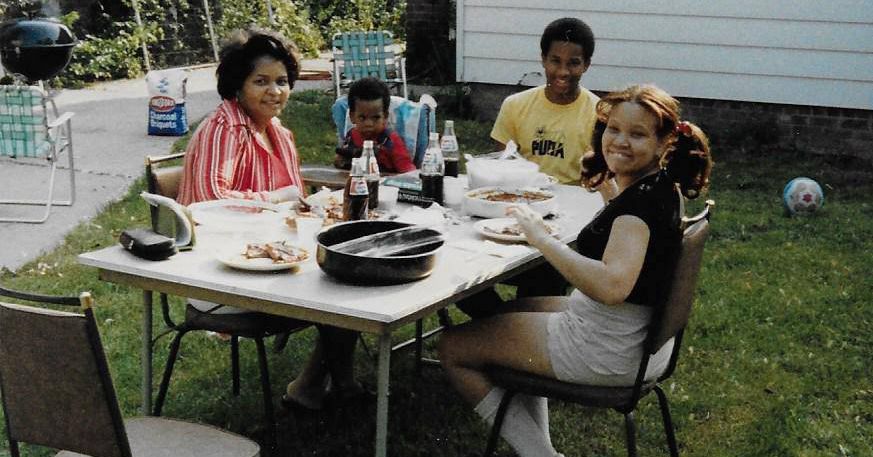 This post originally appeared on the blog Corner Side Yard.

I’ve written quite a bit about segregation and its impact on cities, and more specifically on its impact on people of color. But I’d like to offer a personal view, using my own family history to demonstrate segregation’s personal and generational impact.

My mom’s dad was born in 1899, and her mother in 1905. Both were born and raised in Alabama and came north as young adults in the mid-1920’s. My grandfather moved north after an altercation with a white foreman at the steel mill made him a target of other workers; he escaped to save his own life. The story goes that my grandmother was in an abusive marriage in Alabama and she also escaped to save her life. They met and married in Detroit.

My dad’s parents were somewhat younger. His dad was born in 1920, his mom in 1922. My grandfather was born in Arkansas but moved to St. Louis and then Detroit as a teenager during the Depression. My grandmother was born in Georgia but also moved out of the south as a youth. They met in Detroit and got married in 1941, just two weeks after Pearl Harbor.

All of my grandparents took full advantage of living in a booming Detroit. There were plentiful employment opportunities in the city’s manufacturing economy, particularly in the post–World War II period.

My mom’s dad worked at a Uniroyal plant through the Depression and beyond. He died in 1965, just months after I was born. My grandmother passed in 1980. The two of them raised seven children (my mother is the youngest), and they were able to buy a home in the early 1950’s near Mack Avenue and St. Clair Street on Detroit’s east side.

Like so many homes in Detroit, theirs is now gone, having been demolished in the late ‘80s. They lived on one of those Detroit blocks that has become famously abandoned. Here’s a Google Street image of it:

See the tall evergreen tree on the right side of the street, and the other foliage behind it? That’s about where my grandparents house was. It was a beautiful foursquare home on a small lot, probably built in the 1910s.

My dad’s dad held two jobs, with Ford Motor Company and Wayne County, and was able to retire with pension benefits from both by 1985. He and my grandmother were able to buy a small Cape Cod home in Inkster in the early ‘50s, where they stayed until both moved to live with my aunt in the early 2000s. They raised three children there; my dad is the oldest. Unlike my mom’s parent’s house, my dad’s parents’ house is still around. It’s the one on the far right.

The house looks exactly as I remember it from childhood. In fact, it’s virtually unchanged from when my dad was a child.

Both sets of my grandparents were able to establish excellent footholds into the American Dream, just like so many other families in America. But their ability to pass that dream onward and upward faced constraints that other families didn’t have to face.

My mom’s family grew up just two blocks from the home of Ossian Sweet, a black doctor who in 1925 fought off a white mob trying to intimidate him out of the home he just bought.

My mother’s family moved into their home nearly 30 years after that event, but the neighborhood’s inexorable downward spiral began the moment white residents elected to cede the neighborhood to blacks. That started a cycle of drastically reduced demand (only the eyes of black folks were looking at the homes), reduced values, deferred maintenance, disinvestment, and reduced public services that crippled a community within a generation.

Twenty-five miles southwest of my mom’s childhood home, Inkster is another interesting case of segregation. Inkster is immediately west of Dearborn, home to Ford Motor Company’s headquarters and its Ford Main plant. Dearborn was also famous for its long-time hostility toward blacks, notably under its racist mayor Orville Hubbard, who ran the town from 1942 to 1978.

Since blacks who worked for Ford, like my grandfather, were explicitly excluded from living in Dearborn, Inkster became one of a handful of communities that, by default, black people had to live.

Inkster’s position was reinforced in 1961 by the hasty incorporation of Dearborn Heights, a city composed of area surrounding Inkster on nearly all sides that the largely black Inkster had tried to annex. Inkster took Dearborn Heights to court, arguing that the municipality engaged in racial gerrymandering intended to physically and socially isolate the community. The case was dismissed by the Michigan Supreme Court in 1963.

It’s no exaggeration to say that Inkster calcified as a community after that court case. Although the houses above remain, Inkster followed a similar descent. Witness this view of Inkster Road, its main corridor:

One set of grandparents lived on Detroit’s east side and personally witnessed a downward economic cycle that ultimately ended with their home being scavenged and demolished. The other set lived in the hyper-segregated Detroit suburb of Inkster. And while their former home remains, its Zillow estimate is just $24,500.

There was no transfer of generational wealth from my grandparents to my parents.

But that’s fine. Both of my parents were still able to parlay their working/middle class upbringings into becoming first-generation college graduates. They met at Wayne State University in the early ‘60s and got married and had a child (me) in 1964. We lived not far from where the Detroit riots started in 1967, my earliest memory.

With another child on the way, they elected to get out of the tense environs near the riot’s epicenter and buy this house on Manor Street, in a more stable and comfortable area:

That’s my childhood house with the small tree in front and chairs on the front porch. We lived there for 13 years.

When we moved there in 1968, we were maybe the fifth or sixth black family on the block out of maybe 20 homes. Soon after, a complete and swift transformation of the neighborhood took place.

I don’t recall any outright hostility toward us or any of the other black families, but hey, I was only 4 or 5 years old. What I do recall is that by the time I started first grade in 1970, our block was entirely black, except for the O’Grady’s across the street. The O’Grady’s lasted on the block until about 1978, when their adult kids moved them out.

Outright hostility and intimidation wasn’t necessary because everyone knew the drill—once blacks move in, cede the ground and look elsewhere.

Unlike the neighborhoods of my grandparents, the neighborhood of my childhood home hasn’t fallen quite as far. Some of my neighbors from nearly 40 years ago still live there. But in part because of segregation, and an overall moribund regional economy for the last half century, it lost a certain level of demand over time.

My last visit to the block happened in May 2018. The neighborhood has remained at a weird level of stasis for a very long time; it looks exactly the same in 2018 as I remember it in 1978.

There was no transfer of generational wealth from my parents to me and my siblings, either.

I’m not writing this to suggest that my parents could or should have been wealthier than they are, nor am I suggesting the same for me and my siblings. In our respective careers we’ve all done quite well. My dad is a retired A.M.E. Church pastor who spent 41 wonderful years in the ministry. My mom had a varied career that took her from working in the drama department at the University of Detroit Mercy to community college work in Chicago’s south suburbs. My sister has been a federal government contractor in northern Virginia since the ‘90s; my brother is a college psychology professor in Brooklyn. I’ve had a successful urban planning career that’s opened urbanism writing, research, and consulting opportunities for me. All of us are happily married with fantastic kids. We’ve done well and we live well.

But we’re successful despite this lack of generational wealth. Tatjana Meschede and Joanna Taylor, researchers at Brandeis University’s Institute on Assets and Social Policy, identified the role of family inheritance as one aspect of maintaining the racial wealth gap in America:

The two researchers focused specifically on inheritances among families where at least one parent has a college degree. They looked at families like this in order to test the notion that higher education is a great equalizer.

The differences that they found between black and white families were stark. “Among college-educated black families, about 13 percent get an inheritance of more than $10,000, as opposed to about 41 percent of white, college-educated families,” Taylor said in a release announcing the new research. More specifically, white families that receive such an inheritance receive, on average, more than $150,000 from the previous generation, whereas that figure is less than $40,000 for black families.

The head start on wealth via inheritance has intergenerational repercussions. It could mean a college student has the ability to accept an unpaid internship that provides valuable work experience, without worry. It could mean repaid student debt, or no student debt at all. It could mean a down payment on a home purchase you’d otherwise be unable to afford, at a relatively young age. It could mean the chance at pursuing your career passion, instead of intensely focusing on providing for yourself and your family.

But what happens when communities are allowed to decay to the extent that Detroit’s East Side and Inkster have? There’s no chance at intergenerational transfer, and with that comes a cascading loss of opportunity.

A similar home in suburban Ferndale, less than five miles from my Detroit neighborhood, is estimated to be valued more than four times as much.

Our society has long determined who accumulates wealth, and where it’s accumulated.