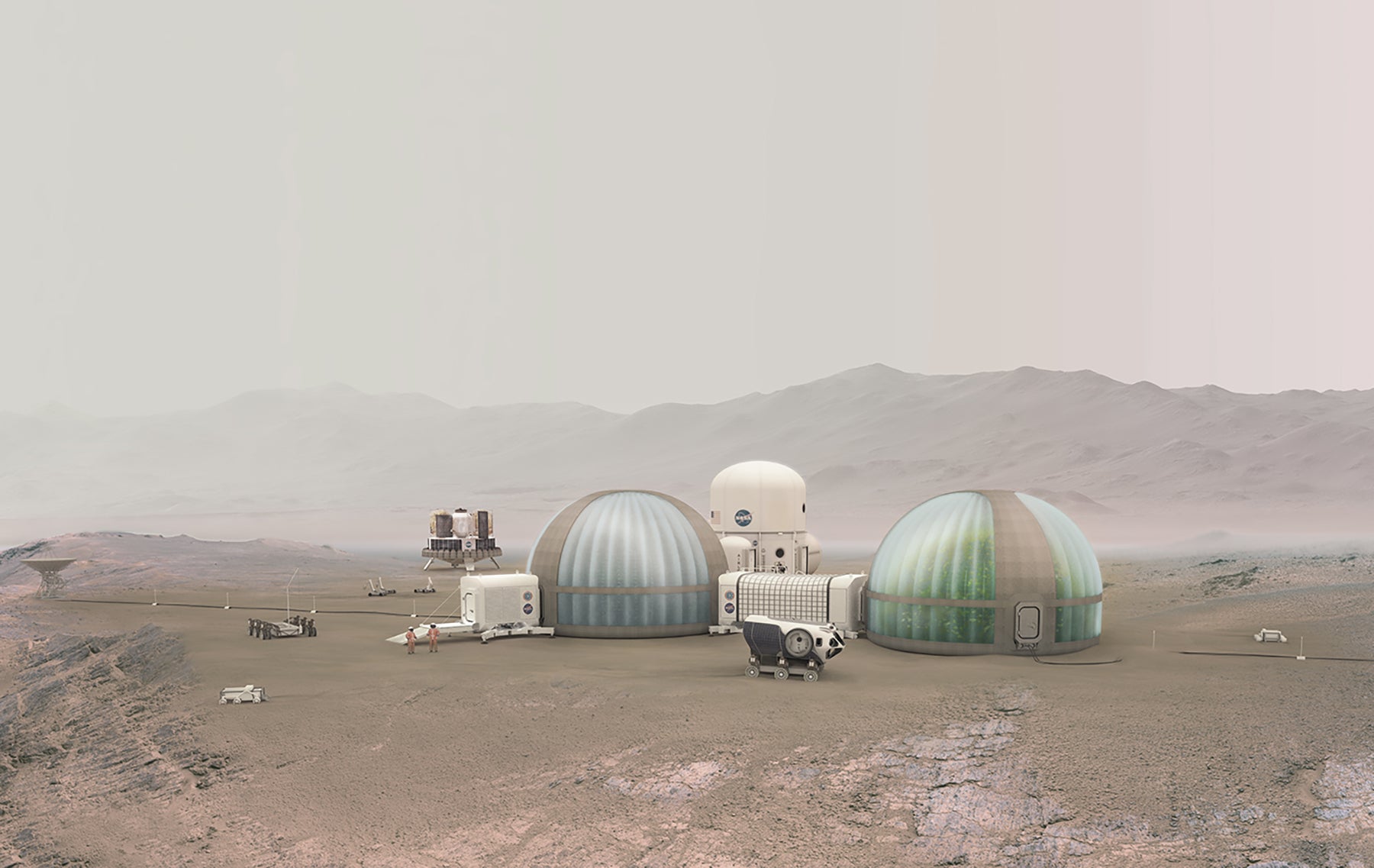 A student team from the UC Davis Space and Satellite Systems club was one of five university teams invited to present their plans for a Mars greenhouse at the NASA Langley Research Center last Tuesday, April 23.

“We all had an amazing experience learning from other teams’ ideas and interacting with professional engineers as well as fellow students,” said team member Lucas Brown, a freshman in aerospace engineering.

The UC Davis students entered the Martian Agricultural and Plant Sciences project for this year’s BIG Idea Challenge, organized by the National Institute of Aerospace in collaboration with NASA. Their goal: to design a greenhouse to support four astronauts during a two-year stay on Mars. The design needed to relate to the “Mars Ice Home” concept, an inflatable structure that would arrive on Mars before the crew and be partly assembled automatically. The walls of the ice home and greenhouse would be filled with water, frozen solid in Martian conditions, for structure and protection from radiation.

Dartmouth College placed first among the five finalists with MIT taking second place, NASA announced Wednesday. Unlike most of the other competitors, the UC Davis team was made up entirely of undergraduates, many of them freshmen and sophomores.

Developing the proposal took the team in a wide variety of directions, from soil chemistry and irrigation to interplanetary law.

“We’re all engineers but we’re all going well outside our scope,” said team lead Duha Bader, a sophomore majoring in mechanical and aerospace engineering.

“It’s cool that it’s an intersection of agriculture and engineering — I never thought I would be studying irrigation systems,” Brown said.

The UC Davis proposal made use of Martian soil for growing plants, while the other competitors used hydroponic systems. The team assessed the pros and cons of both approaches and found that while hydroponics might be easier to set up, a soil-based greenhouse would be more resilient and have other long-term benefits for the mission beyond providing fresh food.

“There is stress relief in growing plants, it has recreational and mental benefits,” said Journey Byland, sophomore in aerospace engineering, who designed the soil-processing system.

Martian soil would be collected, sterilized with an electron beam to remove any Martian microbes — just in case they exist — and treated with water to remove perchlorates, toxic chemicals common in Martian dirt.

Growing soybeans mixed with nitrogen-fixing bacteria would enrich the soil. Plant waste would be burnt to ash and put back into the soil; earthworms (from Earth) would help mix the soil and keep it healthy.

The team considered, but rejected, using human waste to enrich the soil like fictional astronaut Mark Watney did in the novel The Martian by Andy Weir. The potential health problems are too complicated with a multiperson crew, they said.

A 1967 United Nations treaty calls on member states to avoid contamination of other planets with Earth microbes, or bringing alien microbes into the Earth environment. The agreements and NASA policies stemming from the “Outer Space Treaty” mean that all the Martian soil coming into the greenhouse has to be sterilized and that at the end of the mission, the greenhouse’s plants must all be destroyed and thoroughly sterilized.