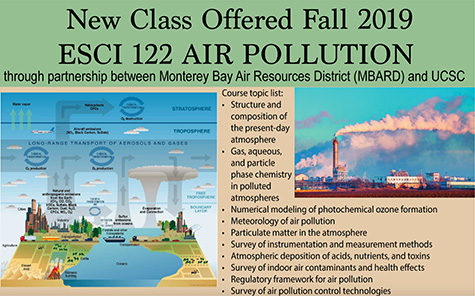 A new upper division course on air pollution designed for students in the environmental sciences major has been made possible through a partnership between UC Santa Cruz and the Monterey Bay Air Resources District (MBARD), which is also supporting campus research on air quality sensors.

Environmental toxicologist Peter Weiss-Penzias, who is developing the new course (ESCI 122), said it will be offered for the first time in fall 2019 and will provide a broad survey of topics related to air pollution. Starting with the basic chemistry and physics of the atmosphere, the course will cover topics such as the life cycles of various pollutants, their health effects, the regulatory framework for air pollution, and engineering solutions and control measures.

Weiss-Penzias has also received a grant from MBARD to support his work on low-cost sensors for monitoring emissions of ethanol and other volatile organic compounds.

“The partnership is providing support in two important areas,” Weiss-Penzias said. “The air pollution class fills a need for the new major in environmental sciences, and our work on sensor technology addresses an issue with ethanol emissions that was brought to our attention by the Air Resources District.”

“We want to take advantage of the research capabilities at UC Santa Cruz and the fact that we have this major research institution in our backyard,” Stedman said. “We also want to generate awareness about the air quality agency among students, and there’s a workforce development aspect to it as well, since MBARD is frequently looking to recruit air quality engineers and specialists.”

Weiss-Penzias said he got to know MBARD officials through his research on mercury pollution and serving on a panel for the district’s Clean Air Awards. Stedman told him about increasing concerns statewide regarding ethanol emissions from large winery operations, which led to the sensor technology project.

Large winemaking facilities can be major sources of air pollution, Stedman said. “Volatile organic compounds are a component of smog, and in sunlight and high temperatures they form ozone, so that’s why we’re concerned,” he said. “New sensor technology could help us get a more accurate picture of the emissions.”

The sensors are based on nanotechnology developed in the lab of Shaowei Chen, professor of chemistry and biochemistry at UC Santa Cruz. Mauricio Rojas-Andrade, who earned his Ph.D. in Chen’s lab in 2017 and is now at UC Irvine, worked with Weiss-Penzias on the sensor technology, for which they have filed a patent application.

With the MBARD grant for the sensor project, the researchers were able to secure additional funding from UCSC’s Launchpad program to support work on a proof-of-concept prototype device. Weiss-Penzias is advising a team of undergraduates in the Baskin School of Engineering who are building a device as their capstone project.

“Mauricio and I made a prototype sensor and showed that it works, and we’re now working on a proprietary blend of nanoparticles to optimize the sensor,” Weiss-Penzias said. “The students are making the actual device, building a chamber for sampling and developing all the electronics for processing the signal output from the sensor, wireless transmission, and so on.”

While detecting ethanol emissions is the initial focus of the sensor project, the researchers plan to make the sensor tunable to detect other volatile organic compounds as well.