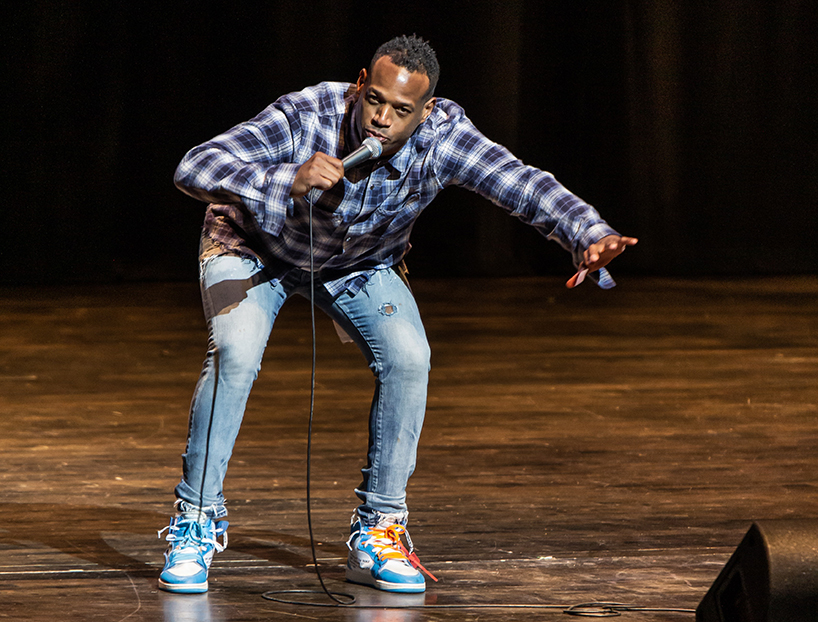 When she heard her daughter would be meeting Marlon Wayans, Aleathea Williams’ mom sent her a photograph.

Posed in it – her mom with the comedian.

Aleathea was one of two University of Missouri–St. Louis students to win meet-and-greet tickets with the Mirthweek comedians Wayans and Loni Love. She had brought her triplet Alexus as her plus-one.

Would the sisters be telling Wayans about the mother-daughter parallel and showing him the photo?

The two were backstage Friday in the Blanche M. Touhill Performing Arts Center for the finale of the University Program Board-sponsored week of cheer. Like many in the room and, later, in the packed auditorium, the Williams sisters grew up entertained by Marlon Wayans and Wayans brothers projects such as “In Living Color,” “Scary Movie,” “White Chicks” and “Marlon.”

“I appreciate when comedians can be in the real world,” Aleathea said, explaining what she liked about Wayans. “If you don’t have role models in your life, sometimes comedians and celebrities are all you have.”

Still, there was something different about Friday’s performance for even the most fervent fan. Stand-up, as UPB Enrichment Chair Rachel Thompson pointed out, is a fresh venture for Wayans, who just released his first Netflix special, “Woke-ish.”

Despite his newishness to this comedic form, Wayans slew on Friday during a set that stretched, pleasantly, an hour beyond its anticipated end time. The crowd, which filled almost every seat in the Anheuser-Busch Performance Hall, responded with gusts of laughter to the comedian’s style – a high-energy mashup of traditional stand-up and physical comedy.

Throughout, he made sure to adapt his performance to acknowledge the city, opening with a joke about St. Louis that can’t be faithfully transcribed in UMSL Daily and his location on a college campus. One bit involved his experience at Howard University.

“I went to college – for a year and a half,” he said. “I got a Wayans degree, baby. That’s all the school I need…I liked school, but then my professors would be like I want you to make an all-black film, all-black cast, no whites, just black people. You going to take out the whites of their eyes, and the film is going to be called ‘Black on Black.’ What you think of that?”

He went on to talk about his daughter, who has been accepted into University of Southern California.

“She got in the right way,” Wayans said. “My daughter was like, ‘Please, Dad, tell me I got in on my own merits.’ ‘You got it right, b—, you did. My a— is not going to spend $500,000 to get you into school. B—, there is community college. You’ll be right at University of Missouri­–St. Louis, baby girl, with a great crop of people there.’

“I’m kind of upset, a little upset, that the people got caught. You know, I got a son, and that dude ain’t too smart. I got a little money set aside, we going to bribe that n— way in.”

Wayans wasn’t afraid to find the humor in any subject including encouraging his lesbian daughter to have sex on her prom night while acknowledging he might feel differently if it had been his son who was gay. He closed with an extended joke about why no man should lay hands on a woman, something UMSL student Hannah Elzey appreciated.

“It was really cool that he talked about not abusing women,” said the sophomore, who was new to Wayans’ comedy. “I didn’t know what I was expecting, but it was good. He was very, very funny.”

Comedian D.C. Ervin warmed up the crowd for Wayans and for special guest Love. In Love’s opening performance, she talked about her career from the “Chelsea Handler Show” to “Ellen” to having her own show, “The Real.” She directed the audience to embrace their flaws and turn negatives into positives.

“If you’ve got a big nose,” Love joked, “take a side-profile picture.”

Love also connected with the college crowd, advising all to “keep y’all bad a— in school” and “don’t be the campus slut.”

She closed out her performance saying, “There’s nothing like love, and I feel the love in this room tonight. Also, I just want to sing this song together. Are you with me?”

She started singing the lyrics to “I Will Always Love You.”

Not knowing the song and without missing a beat, all joined, and everyone was with her.