Peter Mwariri hopes to use his nursing degrees to better society - EduBlog.News

Peter Mwariri hopes to use his nursing degrees to better society 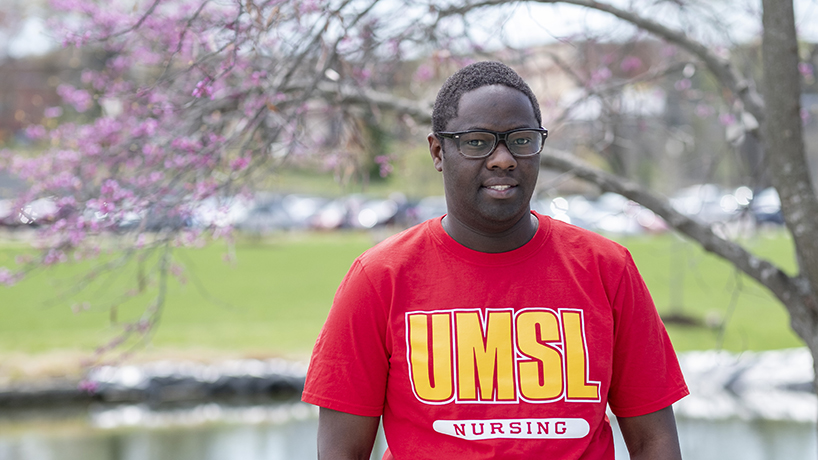 The College of Nursing will present Peter Mwariri with the Shirley A. Martin Distinguished Nurse Award, which recognizes a student who has demonstrated outstanding personal and professional growth. (Photo by August Jennewein)

The diagnosis came much too late for Peter Mwariri’s aunt, Margaret Wanjiku.

By the time the doctors in Kenya had found her breast cancer, it was already stage 4.

“In my country, women are objectified,” Mwariri said. “It’s not easy for them to speak for themselves, so my aunt was going through pain, and she could even tell the hospital, but by the time we knew, it was too late. There are a lot of people who die in my country due to poor access of care and corruption in the government.”

Wanjiku lived for less than two months after she was diagnosed in 2007. Her death propelled Mwariri out of Kenya and into health care.

“I need to do something,” he said. “I need to be be able to educate the community and be able to help with their health.”

In 2008, Mwariri immigrated to St. Louis and, influenced by his nurse uncle, enrolled in the University of Missouri–St. Louis College of Nursing in 2017. Now, two years later, he is poised to graduate from the RN to BSN program with the Shirley A. Martin Distinguished Nurse Award, which is presented to a student who has demonstrated outstanding personal and professional growth, and an acceptance into UMSL’s DNP program. He hopes to use his advanced practice degree to help people both in the United States and in Kenya.

To become an RN, Mwariri earned his associate degree at St. Louis Community College–Meramec while working in its computer lab to support his studies. Then, in 2012, Mwariri joined the U.S. Army Reserve, serving until 2017. He’d spend one weekend a month with the reserve and the rest of his time balancing the demands of school and work with his family life.

“I always wanted something that I could do for this community,” Mwariri said. “I felt like I need to serve the country. When I joined, I had not gotten in the nursing program, so I wasn’t able to be in the medical part – when I was in the army, I just got to do everything.”

His time in the Army Reserve inspired Mwariri to seek work in a government setting where he could make an impact. Currently, he’s a nurse at the Missouri Department of Mental Health, which interests him because he’s noticed a lot of mental disease since coming to the U.S. Adult geriatric nursing and primary care are two of Mwariri’s other interests.

The latter – primary care ­– makes up a large part of why he decided to pursue the DNP.

With the clinical doctorate, Mwariri will be able to diagnose patients and serve as a primary care provider. He’ll also be able to use research to influence trends for the health of entire populations, not just individuals. Eventually, he hopes to also teach.

Mwariri applied to the DNP program in February and found out just two weeks later that he’d been accepted. He’s looking forward to continuing his education at UMSL.

The recommendations of friends are what initially drew Mwariri to UMSL for his BSN, but the affordable tuition and supportive instructors – including then-RN to BSN Program Director Liz Mantych –were bonuses that contributed to his success.

Then there were the projects that tied back into his reasons for becoming a nurse in the first place. In April, Mwariri and his classmates spoke with a group of African American students about hypertension education.

“To our surprise, almost 80 percent of the group gave us stories of hypertension, stroke,” he said. “They tell the doctor that their medicine is not working, and the doctor keeps them on the same medicine for 10 years. We told them you can change your doctor. I don’t want somebody to say, ‘I have been on this medicine for years, and my doctor doesn’t do anything.’”

After Mwariri graduates, he sees himself working to improve health in the U.S. through preventive education while organizing medical mission trips to help people in Kenya.

Mwariri has already made strides toward positively affecting the care of people in Kenya through projects such as a church-organized drive benefiting hospitals. Thanks to a large Kenyan expat nurse community in St. Louis, his church was able to collect medical supplies such as blood pressure cuffs and wheelchairs.

This wasn’t his first experience working to send aid to his birth country. In 2009, Mwariri participated in Shoeman Water Projects, which uses proceeds made from selling donated shoes to drill wells. He found it a transformative experience.

“There’s not good access to clean water, and kids will be dying of waterborne diseases for lack of clean water,” Mwariri said. “I’m always trying to do something to better society. We should take care of people. That was a good project. That opened my eyes. It helped me be able to organize.”

Though Mwariri hasn’t visited Kenya much since immigrating, he did return in 2014 for a critical mission – marriage.

When he left home, Mwariri had also, temporarily, left behind his fiancée. She immigrated to the U.S. four months after the couple married in Kenya. They now have three children: a 7-year-old boy, a 2-year-old girl and a 7-month-old girl. While Mwariri completed his BSN, she resigned from her job to raise their children but has something else in the works now.