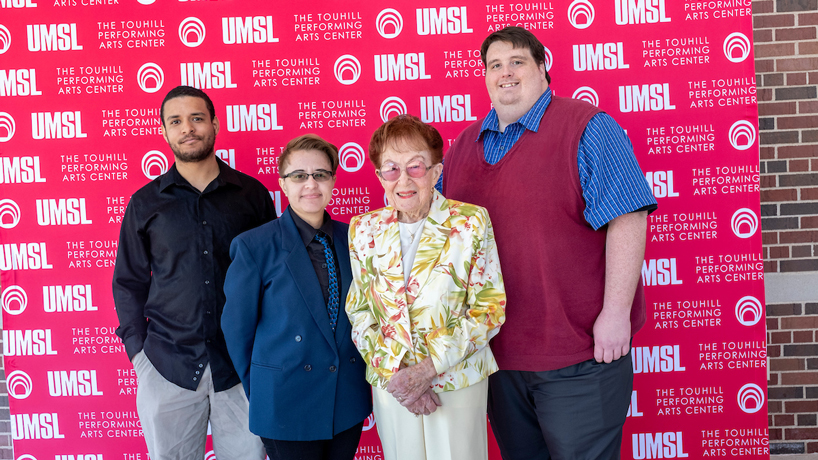 Natalia Valero had already started to set some long-range goals when a diagnosis of cervical cancer interrupted life in 2017.

Valero didn’t stop pursuing a degree even while undergoing treatment and surgeries, returning to class two weeks after a hysterectomy.

Speaking to an audience of more than 200 fellow students and scholarship donors in the Terrace Lobby of the Blanche M. Touhill Performing Arts Center on Friday, Valero expressed gratitude for the classmates and professors who offered support, opened doors, carried backpacks and made it feasible to complete coursework from home. 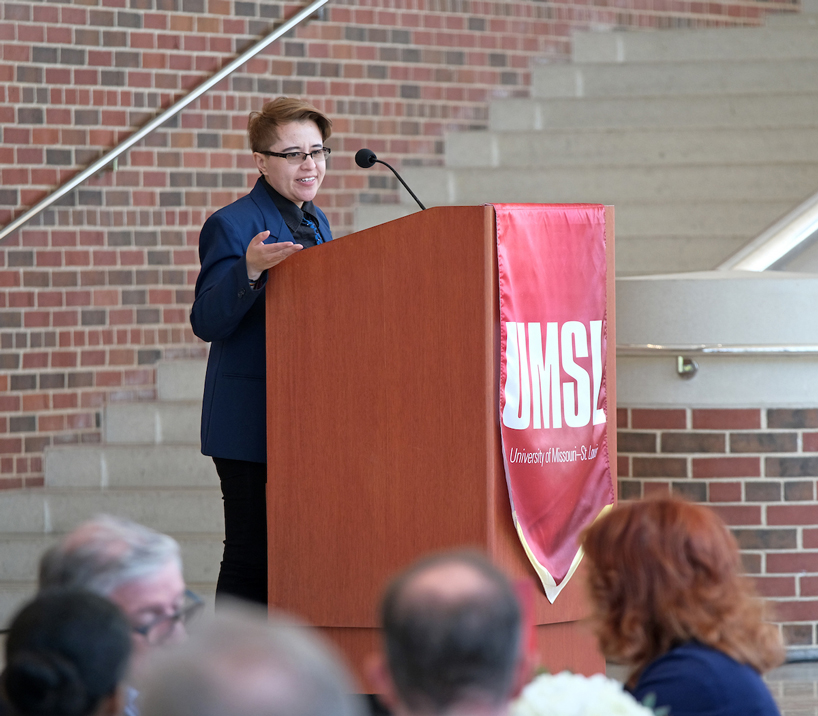 Natalia Valero shares details of studying abroad in Spain with the support of scholarships after surviving cervical cancer. Valero will graduate this spring after majoring in psychology and Spanish.

On the occasion of the annual scholarship recognition luncheon, Valero also shared thanks for the benefactors – particularly Helen Shopmaker – who were ready to assist with support when life for the senior psychology and Spanish major was ready to return to normal.

With the cancer in remission, Valero studied abroad at Complutense University of Madrid in what proved a transformative experience. It gave Valero the opportunity to experience a different culture and cuisine, take in historic sights – including the Alhambra in Granada – and make friends with people from all over the world.

“The University of Missouri–St. Louis, coupled with my time at Complutense, helped me grow academically and improved my speaking and writing skills,” Valero told the audience. “Because of the support I’ve received, I stand here a more assured student, ready to take on anything the future has in store.”

Valero, who will graduate in a few weeks, has plans to enroll in a master’s program in Spanish at Saint Louis University. The soon-to-be graduate would like to return to UMSL afterward to pursue an MSW with the intent to provide mental health services to the Hispanic population in St. Louis.

Valero wasn’t the only student speaker whose life was changed with the help of scholarship support to study overseas during their time at UMSL.

Kaine Cogan, a senior majoring in criminology and Spanish, described looking out the window at the green mountains as his plane made its descent into Costa Rica, his first time traveling out of the country. It stirred a desire in him to travel, and he later studied in Uruguay through UMSL and has visited Panama, Japan and India as well. 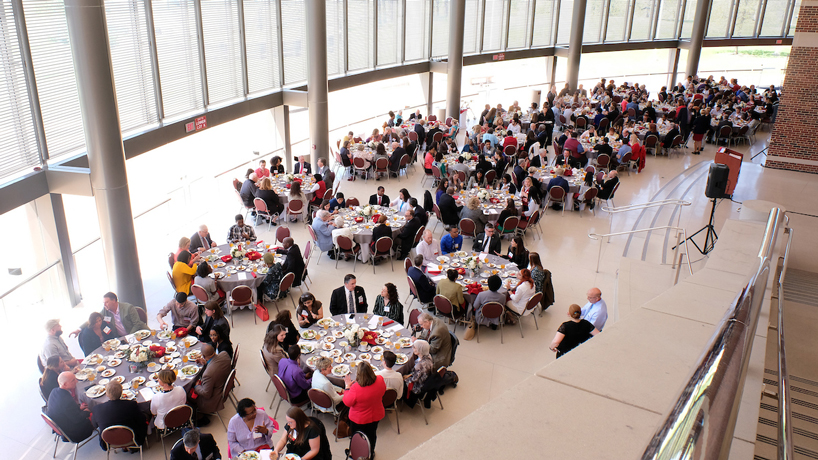 Students and donors dine together last Friday in the Terrace Lobby of the Blanche M. Touhill Performing Arts Center for the annual scholarship recognition luncheon.

The first-generation college student likely wouldn’t have had those opportunities without scholarships.

Senior Ryan Montgomery told the audience why his study abroad experience in China was significant for more than the cultural immersion opportunity it provided.

Montgomery enrolled at UMSL in his 30s and has been working his way through school, intent on becoming a high school teacher. He’s majoring in secondary education with an emphasis in English but would have had a difficult time supporting himself during his required student teaching.

But a College of Education program with the Fuxin Experimental School in the Liaoning Province provided him the chance to complete his practicum abroad, and he did so with scholarship support.

“I was able to go on this life-changing study abroad experience,” he said. “The memories and friendships I made during my short time in China will stay with me for the rest of my life.”

The scholarship luncheon is intended an as opportunity for scholarship donors and recipients to meet and interact with one another. 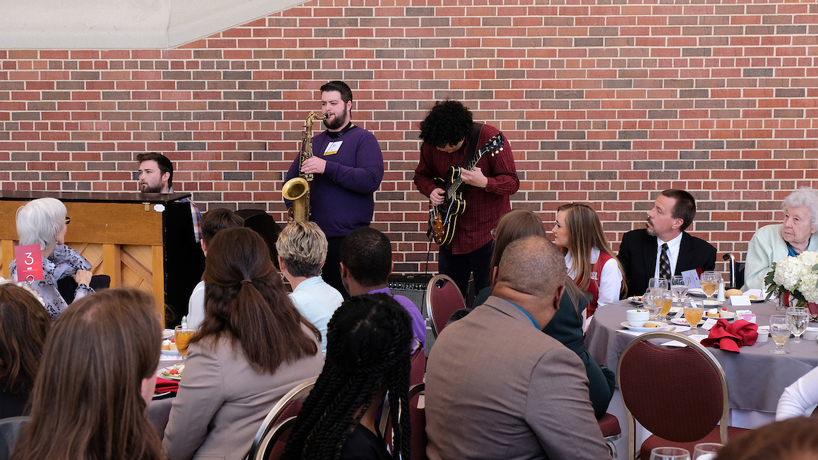 In addition to speeches from Valero, Cogan and Montgomery, the audience heard scholarship recipients Nick Ayala, Trey Riley and Ethan Saake perform together on guitar, saxophone and piano, respectively. They played “Bag’s Groove” and “Blue Bossa.”

UMSL is thankful for all of the donors whose generosity helps enrich the lives of students, but Friday’s luncheon was a chance to especially recognize the 95-year-old Shopmaker and the investment she and her late husband, Allen, have made in UMSL, including through their endowed study abroad scholarship.

“As we heard from the student testimonials today, many never imagined leaving St. Louis much less the United States, and Helen’s recent gift to her endowed study abroad scholarship ensures that many, many more students will be able to have these cultural exchange experiences in perpetuity,” said Sarah Wion, assistant director of development for scholarships. “Helen is, in no small part, enabling the next generation of global citizens.”