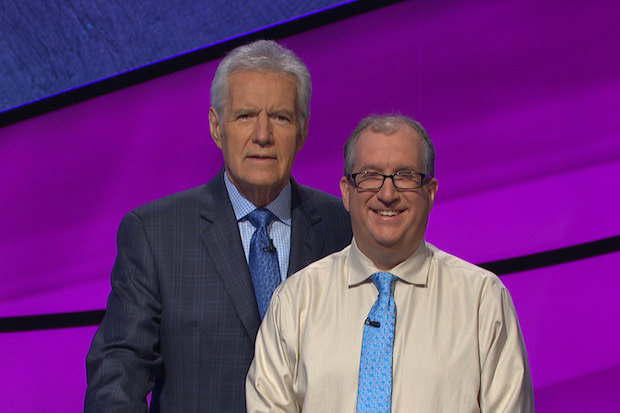 Usually a final score of $53,999 is enough to win on “Jeopardy!” For Adam Levin ’94, it was a little short. Eighteen dollars short, to be exact.

Levin, who is the sports information director for Brandeis athletics, nearly took down one of the greatest champions in the show’s history in the episode that aired Monday, April 29. The appearance was a dream come true for Levin, who got his start in competitive trivia at Brandeis as a member of the Brandeis College Bowl team (now called Quiz Bowl).

He came in second place to James Holzhauer, a professional gambler from Las Vegas who has grabbed headlines and smashed records with his big betting playing style. Holzhauer finished with $54,017 after both players correctly answered the Final Jeopardy! clue.

After all the final answers were revealed in Final Jeopardy!, Holzhauer leaned on the podium with a hand to his forehead and breathed a sigh of relief. Host Alex Trebek remarked, “Adam made you earn it today.”

“My once-in-a-lifetime story doesn’t have quite the ending I always dreamed about, but I’m exceptionally proud of my showing,” Levin said. “The fact of the matter is, I’ve seen it time and again with the student-athletes that I cover. Sometimes, you can give your all-out best, and it’s just not enough. But if you left everything out on the field – or stage, in my case – it’s all you can ask for.”

Read Levin’s first-hand account of being a contestant: This Brandeisian tested his mettle on ‘Jeopardy!’

Read more about Levin’s appearance (some links include trivia spoilers):

Boston Globe: We talked to the Brandeis employee who came within $18 of ousting James Holzhauer on ‘Jeopardy!’