Alumnus commits $1.5 million to the Department of Classics - EduBlog.News

Alumnus commits $1.5 million to the Department of Classics 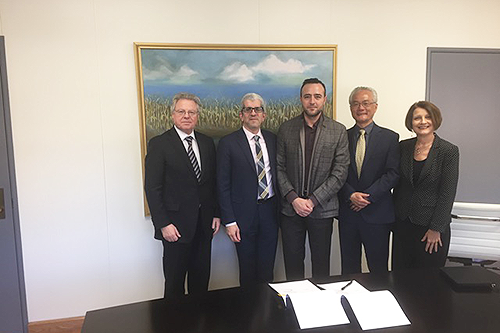 From left: U of I Provost Andreas Cangellaris; Antony Augoustakis, head of the Department of Classics; George Reveliotis; Feng Sheng Hu, Harry E. Preble Dean of the College of LAS; and Joan Volkmann, associate dean for the College of LAS Office of Advancement, pose for a photo after signing an endowment commitment with Reveliotis. (Photo courtesy of the Department of Classics.)

The Department of Classics at Illinois has received from LAS alumnus George Reveliotis an endowment commitment of $1.5 million, one of the largest gifts to a humanities program on campus.

Reveliotis (BA, ’96, history), a father of four, is the founder and managing partner in Reveliotis Law, P.C., a property tax and real estate law firm in Park Ridge, Illinois. He serves as the president of the Pan-Arcadian Federation of America and a board member of the Greek American Nursing and Rehabilitation Center. He is also on the board of advisors of the PanHellenic Scholarship Foundation.

He has already been a strong supporter of the Department of Classics. He previously funded a teaching assistant position for the Department, and in late 2018 he pledged another $100,000 to fund a lecturer. The 2018 gift has now been incorporated into the $1.5 million endowment, which Reveliotis has pledged over the next 10 years.

Reveliotis said that his decision to give came from perspective he’s gained as an attorney who has helped people who’ve come to America work through their successes and failures. He wanted to leave something that carried a “different type of value,” he said, which can carry on in perpetuity.

“The purpose of the endowment will be to help reconnect academia with its roots, to connect students with the history, the language, and the light of the civilization that Greece has given to the world, because I believe that it is a way to promote Hellenism through education at American universities, where Hellenism will be taught to non-Greeks,” Reveliotis said.

“The United States is more than just a nation or country. It is an idea.  It is an institution of the mind where everything is possible as evidenced by the founders’ vision and the Bill of Rights.  In essence, America is a child of Hellenism,” Reveliotis added. “As such, we Americans need to be afforded the opportunity to learn the basic tenets of Hellenism as they were known at inception and their first application in the world’s first institution of the Western mind.”

Antony Augoustakis, head of the Department of Classics, said that the generous endowment from Reveliotis will strengthen a thriving department on campus and its Ancient and Modern Greek programs.

“Such superb support for the classics and Hellenic Studies translates into amazing opportunities for the undergraduate and graduate students who study the classics, not only Greek language but also cultural studies,” Augoustakis said.

The Department of Classics began to offer Modern Greek language classes last August and with great success. Classics offers a variety of classes to thousands of students every year. Greek Mythology alone enrolls 1,500 students every year and has a very long tradition at the University for many generations of undergraduates.

“The study of Ancient and Modern Greek will continue to thrive on the flagship campus of the University of Illinois, in a department with such a long tradition in offering Greek and courses in Hellenic culture since the foundation of the university,” Augoustakis said.

There are three designations for the gift:

Feng Sheng Hu, the Harry E. Preble Dean of the College of LAS, said that the gift from Reveliotis will support a vital avenue of study at Illinois.

“This wonderful gift is a testament to the excellence of people and programs in LAS and the Department of Classics, and it provides the means for an even more successful future,” Hu said. “We are enormously grateful for the generosity of Mr. Reveliotis. His gift helps secure the future of an important program in LAS, and it affirms the importance of Hellenic studies and humanities as fields of study.”

U of I Provost Andreas Cangellaris said that the university is fortunate for Reveliotis’ passion about Hellenic studies.

“This gift will help cultivate and extend access to Hellenic studies across the campus,” Cangellaris said. “We are grateful for his loyalty, and we look forward to all the good that his gift will bring to our programs and our students for years to come.”